Director Herman Yau has made a bit of a career from telling stories of “innocent cannibalism”, in which diners in restaurants unknowingly eat human flesh. His 1993 film The Untold Story was based on the “Eight Immortals Restaurant murders” of a family of ten, which took place in August 1985 in Macau. Portions of the bodies were never found, leading to speculation – yeah, you got it.

Following Gordon Gecko’s statement that “greed is good!” in Wall Street (1987), the 1990s saw a spate of films about entrepreneurs selling human flesh for fun and profit. Beside The Untold Story, Untold Story II and Ebola Syndrome from Hong Kong, we saw Delicatessen from France, Aranyak from India, The Deathmaker from Germany, Perdita Durango from Mexico, while the Americans contributed Ice Cream Man and Fried Green Tomatoes.

You see what I’m up against, trying to update you on all these masterpieces?

This film gets even weirder, because there is also a pandemic involved – Ebola, the so-called “flesh-eating” disease. Ebola never really got the public going like COVID-19, maybe because it only affected people in places like the Congo and so did not keep the rest of us awake at night. Also, it spreads much more slowly but, if you do get it, you have a 50-90% chance of dying, and it isn’t “just” pneumonia – it is haemorrhagic, meaning that you can bleed out “through your wazoo”, as they say in Last Man on Earth.

“People with Ebola first have symptoms of influenza, but within 72 hours after infection, the virus will dissolve the internal organs”

Ah Kai (Anthony Wong) is an escaped criminal from Hong Kong who bolts to South Africa after killing his former boss, his boss’s wife and another employee. Here is an image showing Hong Kong industrial relations in action. 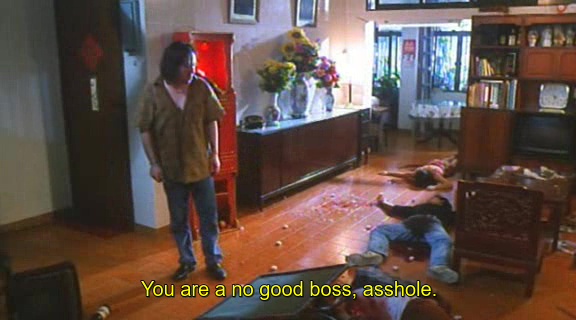 In South Africa, he works at a Chinese restaurant and one day travels with his boss to a Zulu tribe that is infected with the Ebola virus [NOTE: there is no record of Ebola among the Zulu]. He comes across a woman dying of the disease, and decides to rape her – he’s that sort of guy.

He is immune to the effects of the virus, so becomes a living carrier, spreading the disease to others through his bodily fluids. He kills his new boss and his boss’s wife and cousin (seems to be becoming a habit), but he has already given the virus to them, so when he cuts up their corpses and serves them as hamburgers in the restaurant, he spreads the virus all over South Africa. 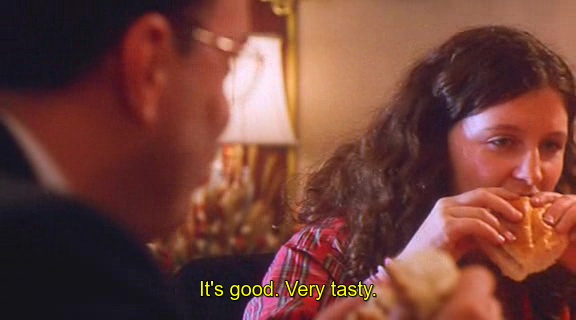 He heads back to Hong Kong with the boss’ cash and moves into a fancy hotel, where he proceeds to spreads the virus to the prostitutes he hires, and everyone else he encounters – dramatic music accompanying each new infection.

Cannibalism as a carrier for pandemics seems apposite right now. Cannibalism and incest, Freud said, were the two great taboos of civilisation, but their prohibitions also define civilisation, so it is not unreasonable to expect at least one of them to pop up in a civilisation-wide disaster. COVID-19 hasn’t been spread by cannibalism yet, or incest (as far as we know) but this movie looks at more than just crime and disease as social disrupters. Ah Kai is aggressive and violent to anyone whom he believes bullies him, usually the rich people who take advantage of his fugitive status. In South Africa (not a place known for Ebola), he is subject to casual racism from the whites, including prostitutes who refuse him their services. The whites, he complains, treat him like a black, and the blacks treat him like a white. He and his victims are dehumanised, which is a precondition for cannibalism – humans are animalised, animals are objectified and become meat.

Chinese restaurants, where he works, use a lot of pork, and several scenes problematise the close proximity of pigs to humans in the way they look and, according to some informants, the way they taste. The Ebola is caught at a Zulu camp where multiple people are dying from it; Kai and his boss are there because the racist white butcher is charging too much for pigs. 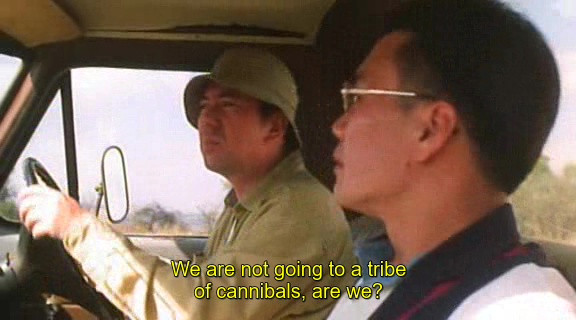 When they go to pick up their purchases, Kai uncovers human bodies instead, before he finds the pig corpses. 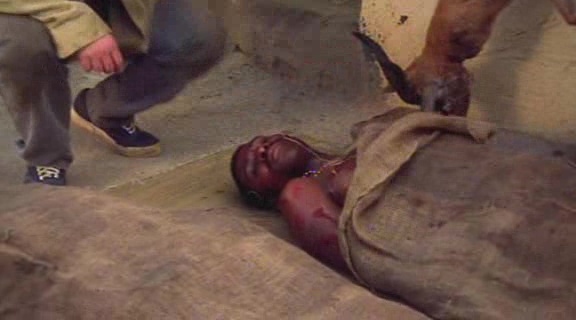 Is there really such a difference between corpses? More than 75% of emerging diseases originate in other animals. COVID-19 is said to have originated at a fish market, where close contact between humans and live animals in a small space made it easy for the virus to jump species. Other coronaviruses, such as severe acute respiratory syndrome (SARS) and Middle East respiratory syndrome (MERS), not to mention bird flu and swine flu, all spread due to the human appetite for flesh.

We used to assume that exotic diseases came from wilderness areas where they had been hosted in exotic animals, which then, like the dying Zulu, were used and abused by humans. But a lot of current research seems to indicate that it is actually our destruction of habitat and biodiversity that causes the spread of diseases like Ebola and COVID-19.

“We invade tropical forests and other wild landscapes, which harbor so many species of animals and plants — and within those creatures, so many unknown viruses. We cut the trees; we kill the animals or cage them and send them to markets. We disrupt ecosystems, and we shake viruses loose from their natural hosts. When that happens, they need a new host. Often, we are it.”

Dread Central summed up the movie:

“The horrid acting and paper thin story are forgivable only for the hilarity with which it’s presented.”

That’s a bit harsh! Chinese movies are not as a rule exemplars of subtlety, but Anthony Wong as the virus super-spreader gives it all he’s got, and a bit more too. It’s a rollicking yarn, and it asks some serious questions too. I was surprised to find I quite enjoyed it.

The full movie can be watched at:

One thought on “Would you like virus with that? EBOLA SYNDROME (伊波拉病毒) (Herman Yau, 1996)”