This movie was a cultural phenomenon. The critics hated it; the fans loved it. More and more viewers kept turning up to midnight showings, dressing the part, dancing the dances, singing the songs. It remains the longest running theatrical release in history, because somewhere a cinema will have it on, at midnight, tonight.

Shot in the style of Hammer Horror films, it is an affectionate satire on the science fiction and horror films that developed in the 1930s, and never went away. There are a mix of tropes, the main ones being the mad scientist (based on Frankenstein) creating life in his lab, and an innocent young couple knocking on the door of a spooky old house after their car breaks down. They are clean-cut Brad and Janet from middle-America town Denton (Barry Bostwick and the brilliant Susan Sarandon). 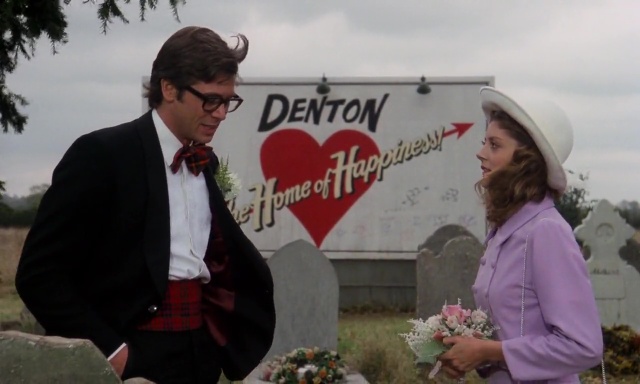 They find themselves in the midst of Dionysian scenes of rock, dancing and sex, presided over by Dr. Frank-N-Furter (Tim Curry, who later played Pennywise), a self-proclaimed “sweet transvestite from Transsexual, Transylvania”. How could this not be popular? 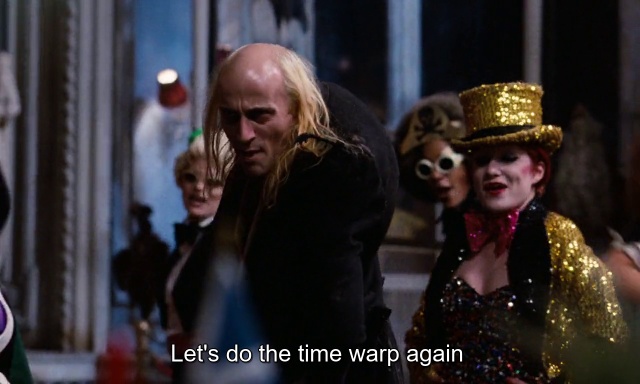 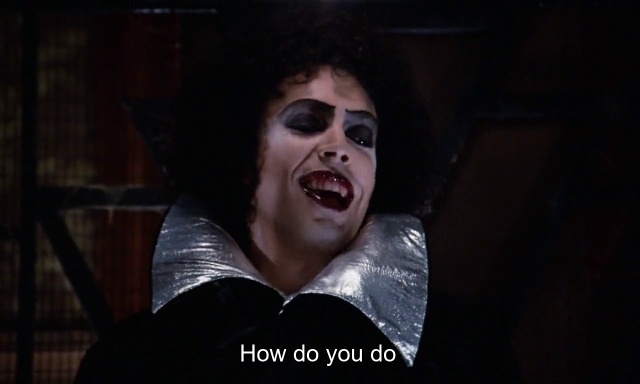 So why is this movie on a cannibal blog? Oh right, EDDIE (Meat Loaf). Some saw Eddie as representing old-time Rock & Roll, being annihilated by Glam Rock, with its emphasis on costumes and makeup. I prefer to speculate that the movie glimpsed the future, say the end of the 2010s. If Frank is alternative, iconoclastic culture, Eddie is one of the basket of deplorables, crashing the party on a motorbike, leather clad and bleeding, part of his brain removed to make the new creature, and preaching the joys of cis-masculinist rock and roll. His knuckles are tattooed “love” and “hate”. We are told that all Eddie wanted 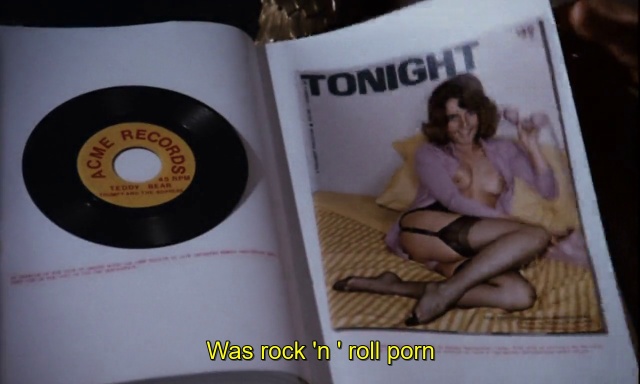 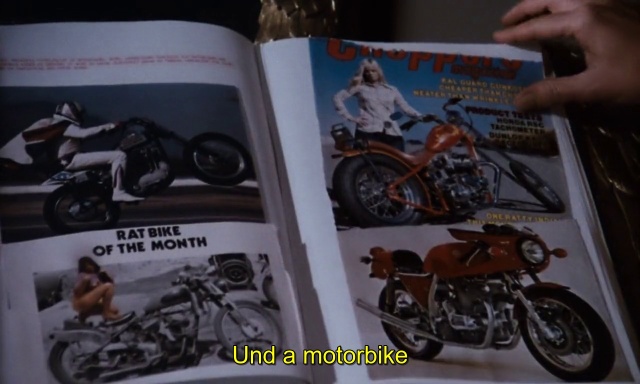 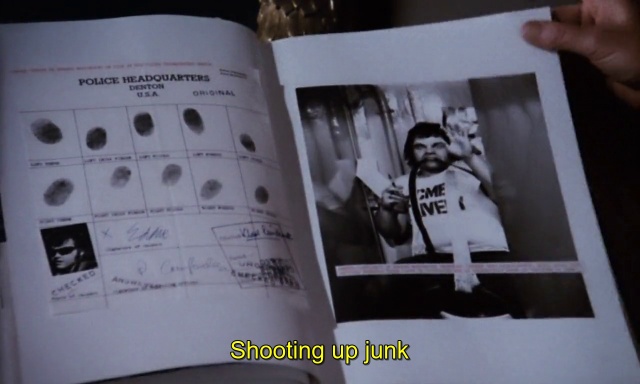 Until Frank takes to him with a pickaxe. 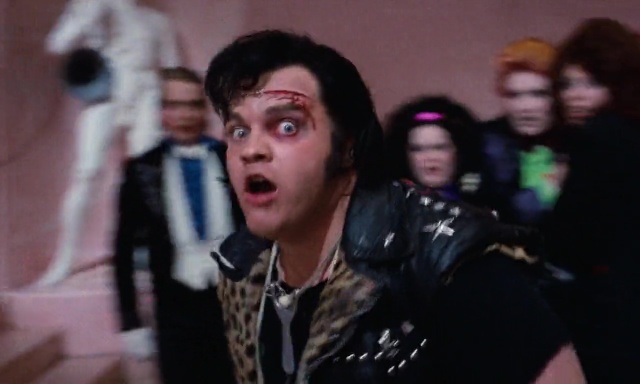 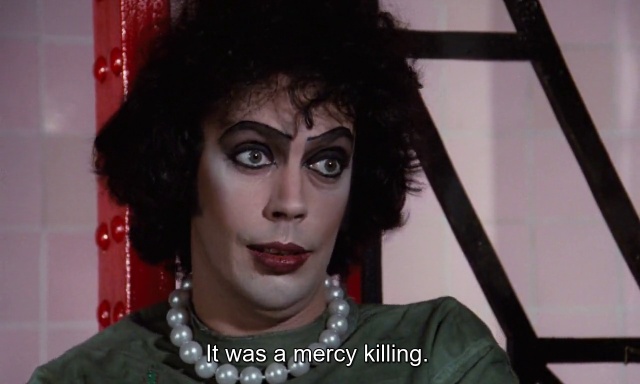 So, what happens to dead Eddie? Well, that’s how we ended up on the cannibal blog. The narrator (Charles Gray, a regular Bond villain) announces what could almost be the mission statement of cannibal studies 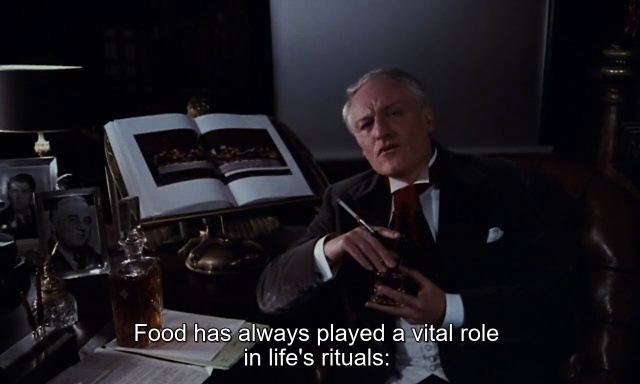 Frank is carving a roast, with an electric knife (anyone remember them?). When the subject of Eddie comes up, he says 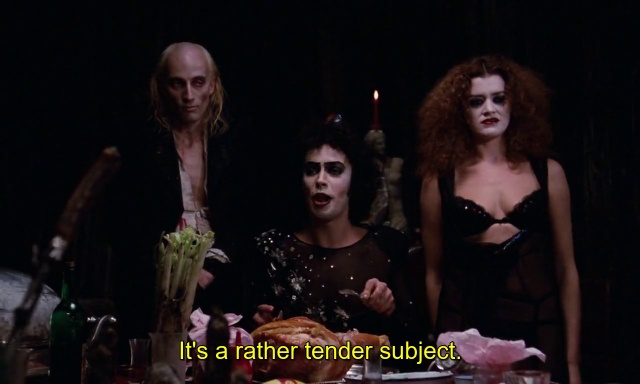 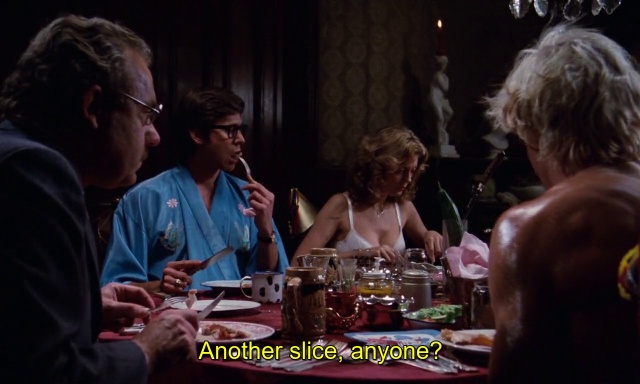 Just in case there was any doubt, Frank pulls off the tablecloth, revealing the rest of Eddie, inlaid in the table 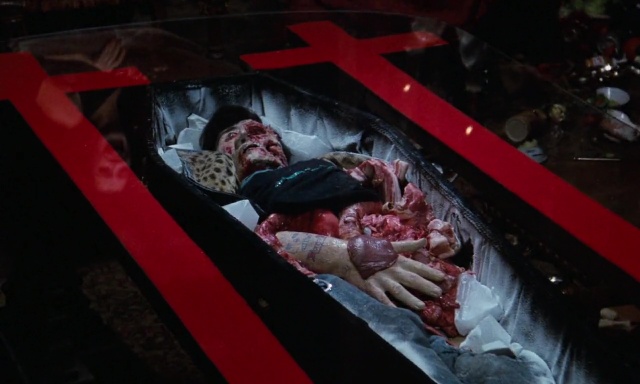 The narrator sums up

“Just a few hours after announcing their engagement, Brad and Janet had both tasted forbidden fruit”

Taboos are the sweetest fruit. Brad and Janet have engaged in debauched sex and cannibalism – two areas where humans imagine themselves demarcated from other animals. In fact, the 2016 remake of this film by Fox found the cannibalism scene a bit rich for network television, and when the tablecloth is removed, Eddie is there, dead, but intact and fully dressed.

In our strange moral system, murder is fine, but cannibalism is still the final frontier. And it seems to be a universal moral imperative – Frank’s flunkies depose him and kill him because 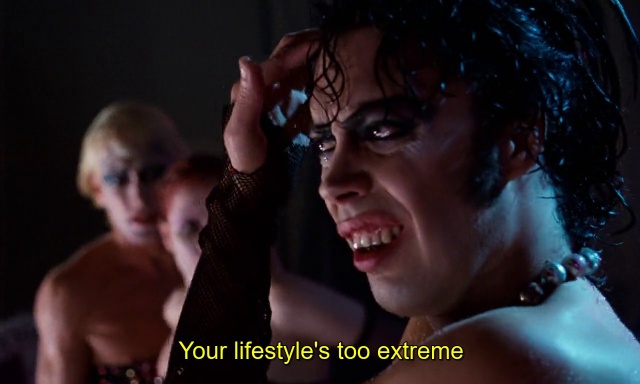 Anyway, turns out that Frank and his staff are aliens from the planet of Transexual in the galaxy of Transylvania, and the castle is their spaceship. The humans are left crawling in the dust and smoke after the takeoff, and the narrator tells us

“And crawling on the planet’s face, some insects called the human race.
Lost in time and lost in space. And meaning.” 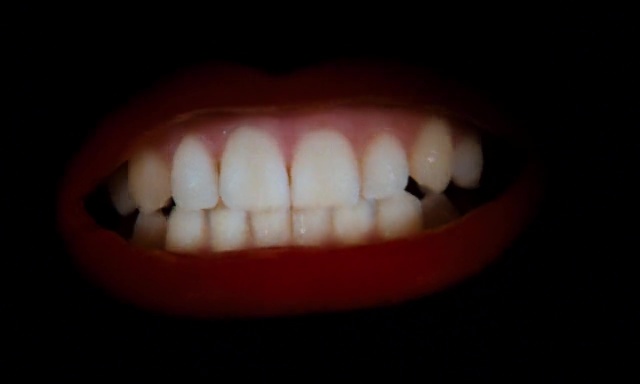