Godard’s Weekend came out in 1967, and has maintained its rage against bourgeois society for over fifty years. From the perspective of Cannibal Studies, it has everything. Cannibal movies are about appetite and power and what, if anything, can counter those fundamental forces of nature. Weekend is about appetite (rampant consumerism), class struggle, and of course the revolution. All are treated as deadly serious and hilariously funny. 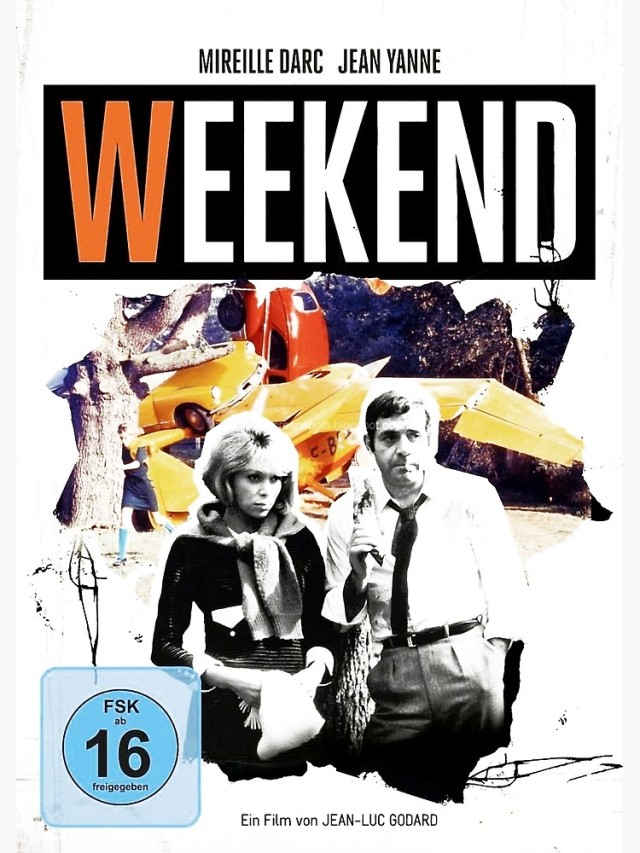 Godard’s previous movie in 1967, La Chinoise, was explicitly Marxist, but Weekend is more anarchist in tone; no one escapes unskewered from Godard’s piercing insight into the absurdity of social interactions. There are no heroes or even sympathetic characters – humanity is depicted as greedy, corrupt and narcissistic. 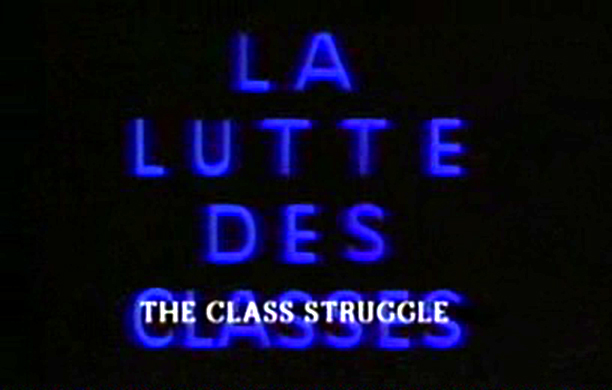 Corinne (Mireille Darc) and Roland (Jean Yanne) are in the car, heading to Corinne’s mother’s home, where they intend to either cheat her or kill her. The road is lined with gridlocked traffic and horrendous car accidents filled with corpses, all of which they ignore. 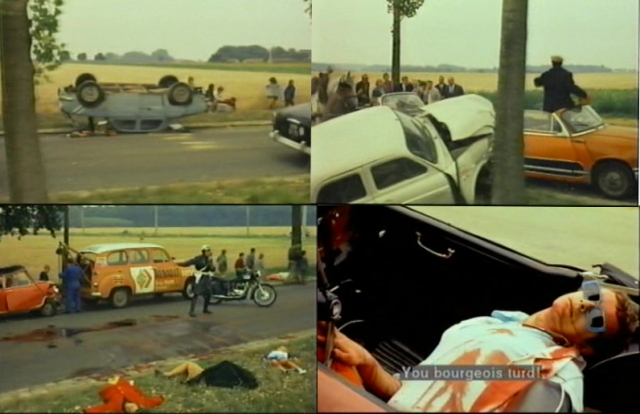 Both are also planning to cheat on each other, once they get the money. Greed, corruption, influence are their only motivations, and the other motorists are beneath their notice, except when they need clothes, which they shamelessly loot from the wrecks. Anyone who stops them is liable to feel their teeth. 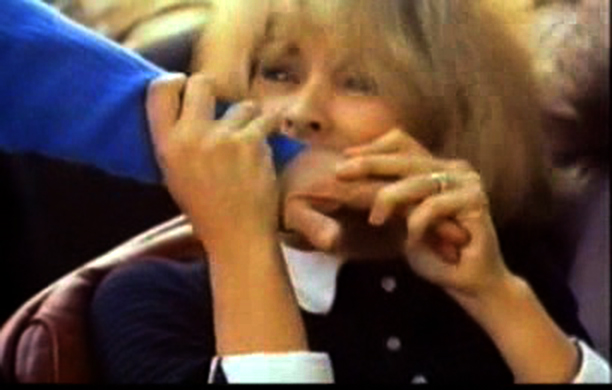 Only when their own car crashes does Corinne express any emotion. 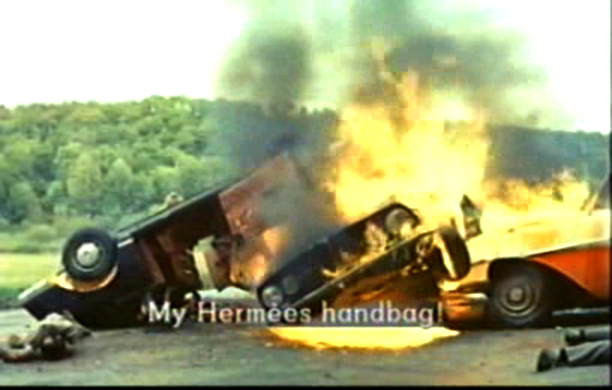 They spend days on the road with only the clothes they wear and an apparently bottomless packet of cigarettes, and come across a range of characters, including the Jacobin leader Louis Antoine de Saint-Just and Emily Bronte, whom they set alight, enraged that she is just an imaginary character. 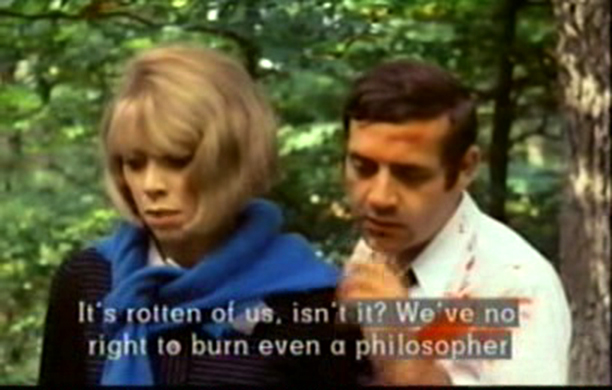 After killing the mother and getting the fortune, they are kidnapped by group of revolutionaries called the Seine-et-Oise Liberation Front, who enthusiastically rape and eat their captives. 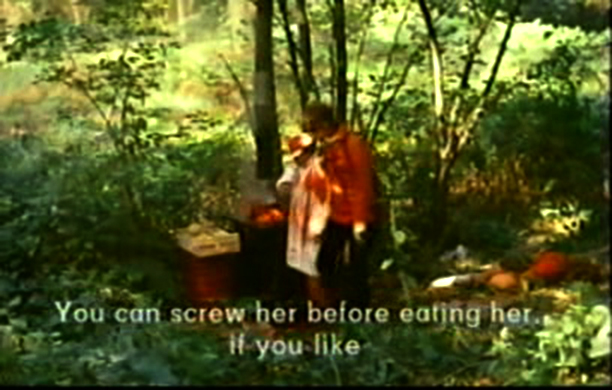 Godard’s vision of the modern guerilla army skirmishing in the outskirts of the cities was a perceptive prophesy of what would a few years later appear as the Red Brigade and the Weathermen. But this group are also cannibals, which allowed me the pleasure of re-watching, for this blog, a movie that still perturbs me some fifty years after I first saw it. The cannibalism of course points backwards to the history of revolutionary betrayal – the Terror of the French Revolution that gobbled up everyone from Danton to Robespierre, the swallowing up of the Bolsheviks by Stalin, and the Chinese Cultural Revolution, in which cannibalism was used as a political weapon. Capitalism is about consumption, but so, too often, are the alternatives. 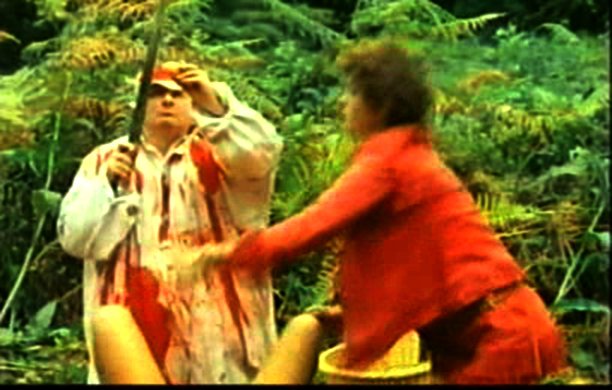 In Godard’s absurdist world, we’re either being eaten by the cannibals, or joining them. 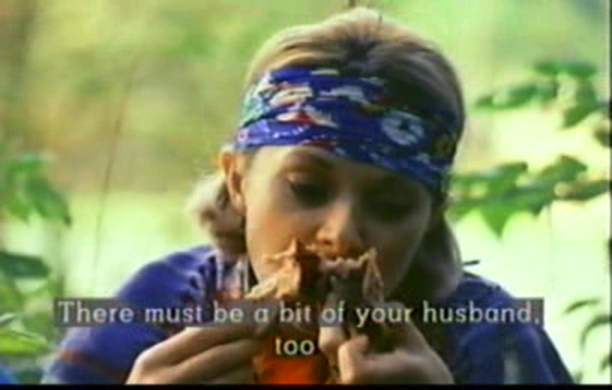 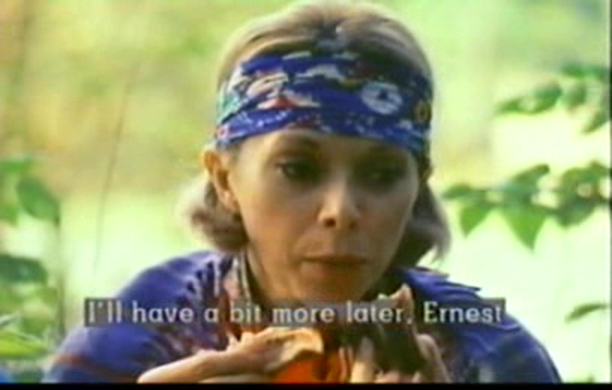 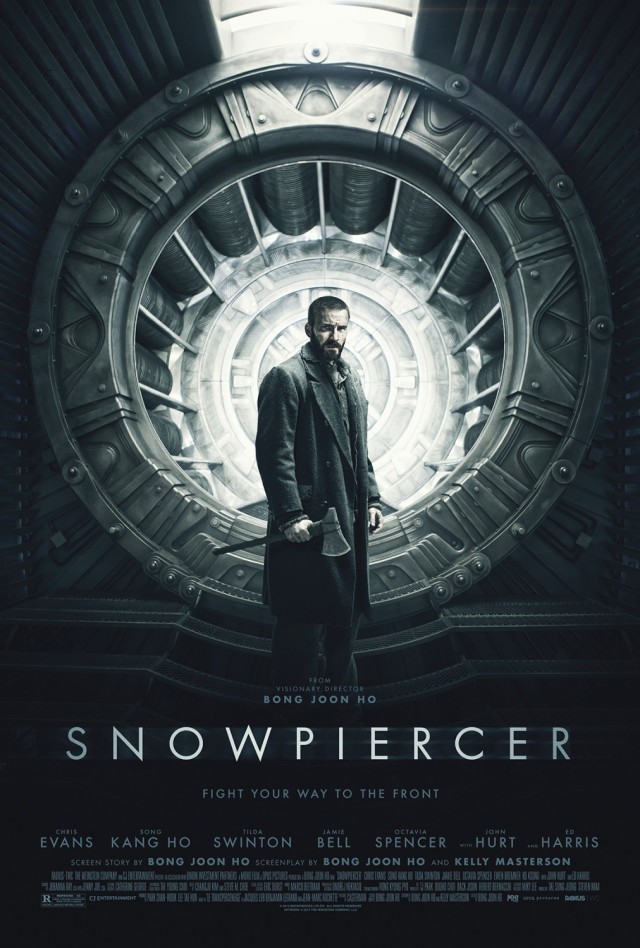 Verschlimmbesserung: a word I found in the Urban Dictionary. It means an attempted improvement, which just makes things worse.

How can we make the frightening prospects of global catastrophe due to climate change even worse? Well, apparently the best way is to come up with a half-arsed way of fixing it. In Snowpiercer, a corporation has come up with a substance, CW-7, which is sprayed into the atmosphere to deflect the sun’s rays and cool the planet. It succeeds brilliantly: 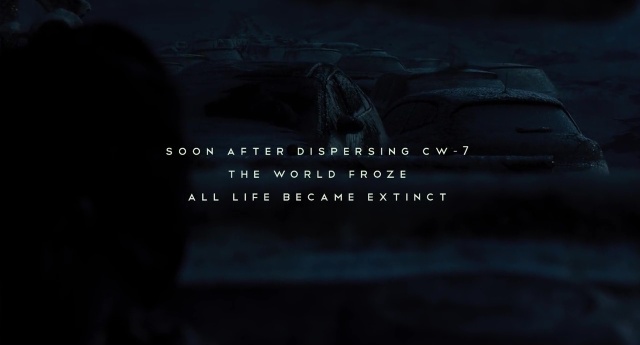 The only humans left alive are on a train, the SNOWPIERCER, which dashes through the snow, circumnavigating the earth once a year. The grateful survivors form a happy band of brothers who work together to survive. 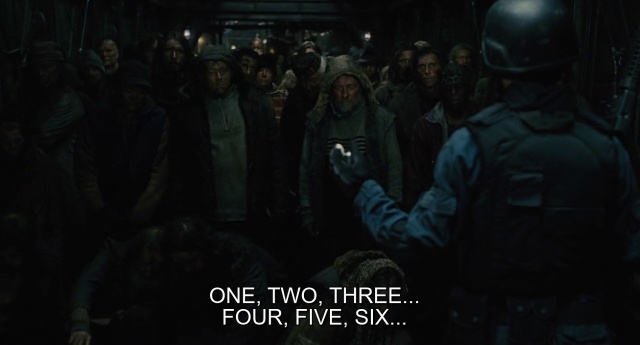 There is, as in all human society, a strict hierarchy of power and privilege. It’s the year 2031. The rich, including the train’s inventor Wilford (Ed Harris) live in luxury at the front of the train, the “scum” live at the back in squalor, beaten and tormented by armed soldiers and fed a mysterious protein bar made of what? 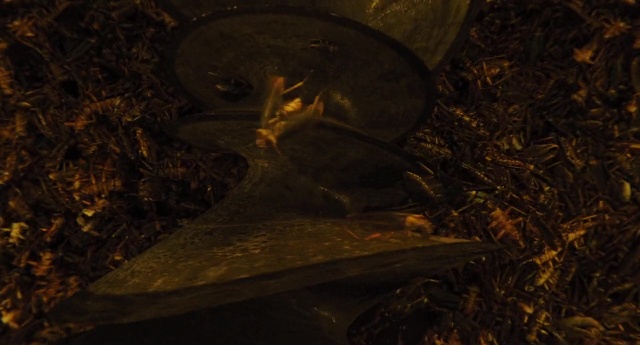 There is revolution brewing though, led by Curtis (Chris Evans, in a far meatier role than Captain America ever offered him). 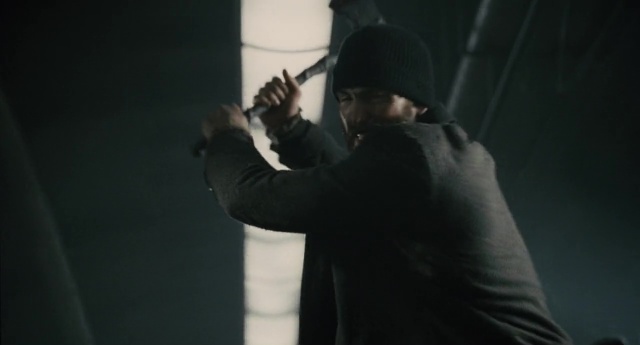 There’s a lot to like in this movie – the plot is interesting, the action plentiful, the cast are stellar (including also John Hurt, Octavia Spencer, Song Kang Ho, and Tilda Swinton, as well as Paul Lazar, who played a nerdy scientist in Silence of the Lambs) and the photography, particularly of the frozen world and the train, is superb. 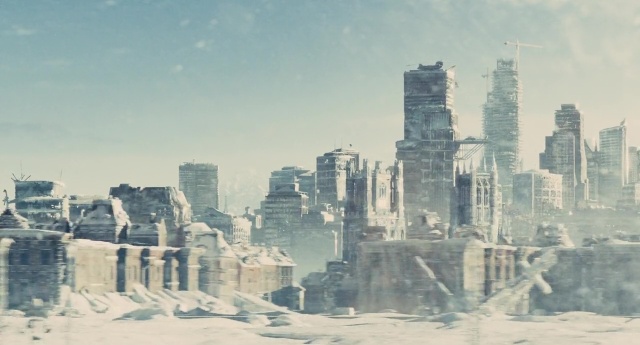 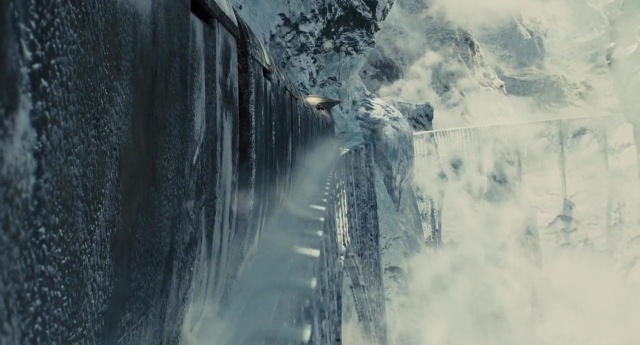 Bong Joon-ho is one of the most exciting filmmakers working today. Metacritic has ranked him one of the 25 best film directors of the 21st century, and he recently became the first Korean director to win the top prize at Cannes – the Palme d’Or, for his new film Parasite, which also explores class and social divisions. The film between Snowpiercer and Parasite was Okja, an animated piece that was also nominated for a Palme d’Or but was voted down, perhaps because it was released on Netflix. Okja crossed the anthropocentric line of privilege, featuring cruelty to a giant pig specially bred for human consumption (like so many animals today) and the horrors she faces in the slaughterhouse. 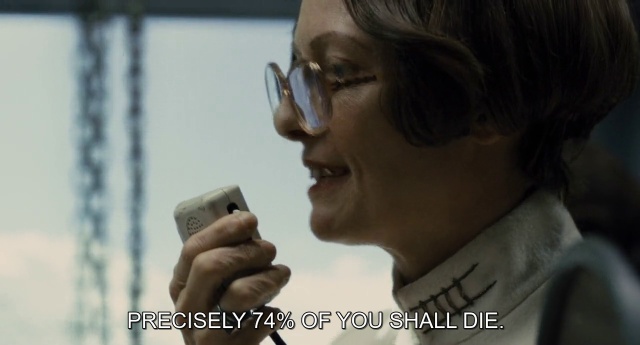 Snowpiercer also explores some fascinating ethical issues to do with leadership, biopolitics, class privilege, revolution, violence, the Holocaust, our reliance on technology and yes, finally, cannibalism. 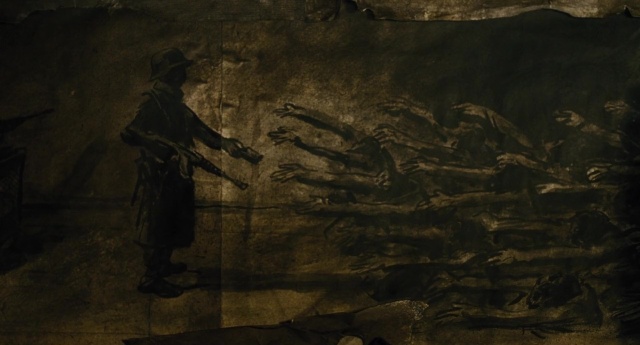 Wilford explains to Curtis: “You’ve seen what people do without leadership.” 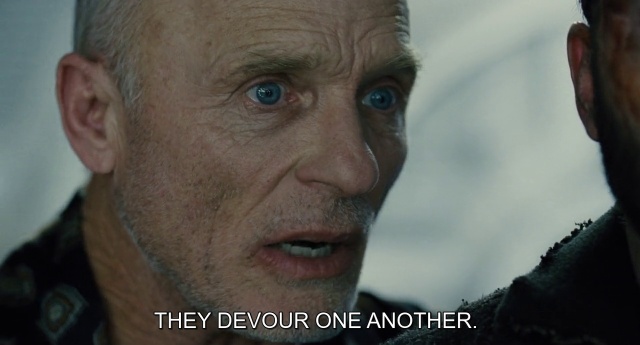 Look, this is a pretty recent movie and got a woeful cinematic release, so you may still be planning to see it. Therefore, I won’t disclose the ending. But you need to know the cannibalism angle, because you are, after all, reading this blog on cannibal films and TV shows.

There are hints in the first half of the film, discussions about the number of arms people have, and then more food references as they march their prisoner Mason (Tilda Swinton), who previously lectured them on their place at the bottom of society, through the front cars. First they go through a greenhouse, then an aquarium, and we hear Bach’s Goldberg Variations, a tribute (one hopes) to Silence of the Lambs.  At the front of the aquarium, ecological balance is maintained by eating the fish twice a year as sushi. They sit down for this elite meal, but make their captive eat the protein bars that are the only food given to the “scum”. 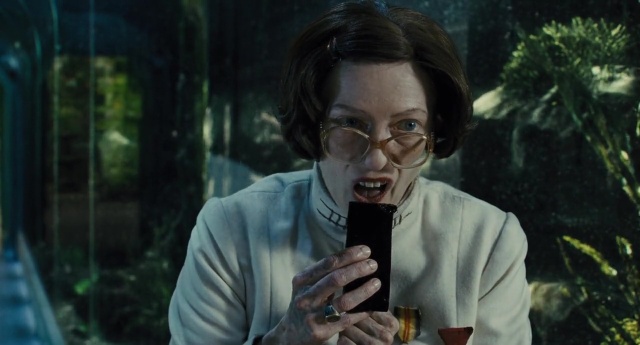 Curtis and his dwindling band of fighters go through a butchery, then a school, where the children are taught that tail-enders 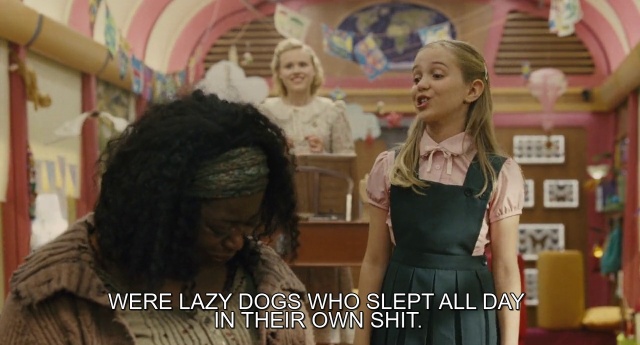 And that we, the pre-trainers, 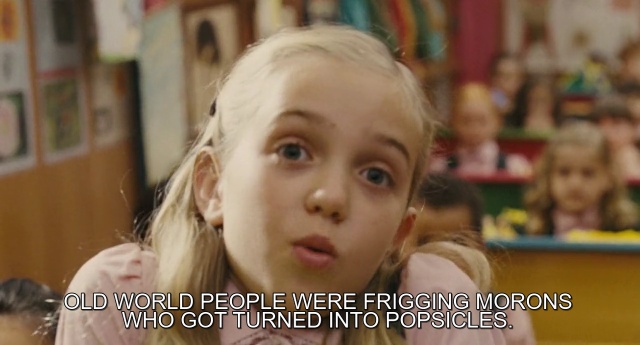 There are dentists, tailors, hairdressers, a fancy dining-car, an aquatic centre, a disco, a drug lounge – all the things that make up decadent, modern society. 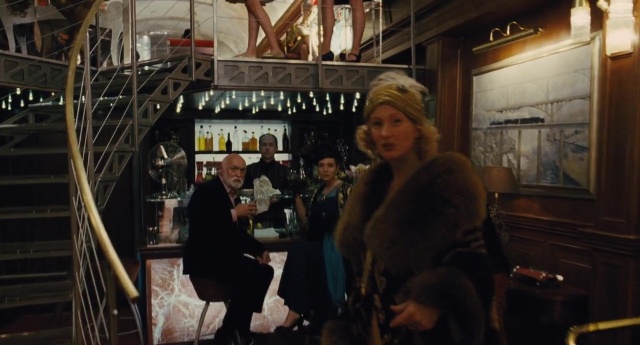 We are socially and culturally determined in large part by what we eat. The food is always better in first or business class. The higher classes eat beautifully prepared, gourmet tidbits. The lower classes, the starving and the deranged eat what they are given, or what they can hunt.

Just before the showdown, Curtis reveals what it was like when they first boarded the train: “A thousand people in an iron box. No food, no water.” 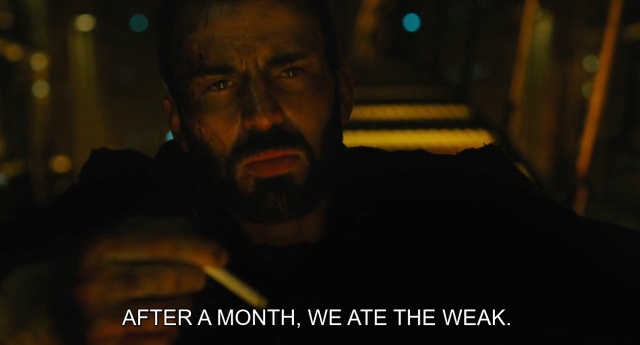 “There was a woman. She was hiding with her baby. And some men with knives came. They killed her and they took her baby.”

Then an old man took the knife and cut off his own arm, offering them that as food, to save the baby. Then others started doing the same. Sacrificing to the cannibals to save the next generation. Then the rich started sending through protein bars. And we thought they were going to be the cannibals!

Things Curtis hates about himself: 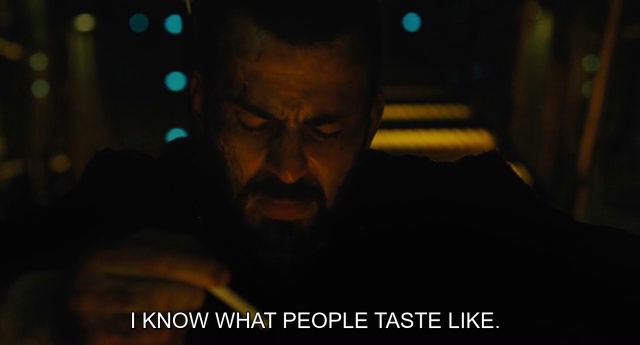 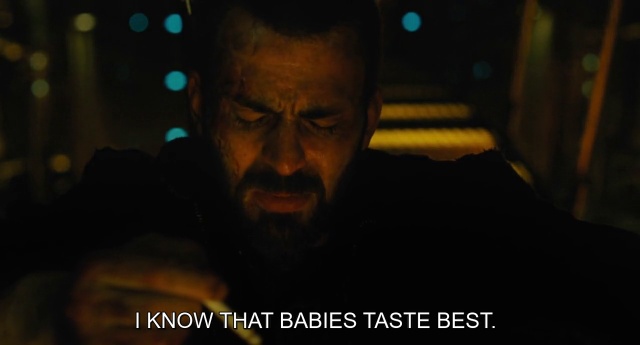