Yeah, but this movie 45 years old, so if you haven’t seen it by now, you’re either not going to, or if you are, it’s because you found out (maybe from this blog) that it’s a cannibal film! So: that IS the spoiler.

Soylent Green presents quite a different picture of survival cannibalism to Alive. Starting with idealised images of leisured gentlefolk posing before Victorian and Edwardian cameras, the opening montage rapidly records the deterioration of humanity through mass production of commodities (starting with Model T Fords) through to alienated office workers, packed freeways and trains, mountains of garbage and clouds of pollution. The montage is followed by an intertitle explaining that the year is 2022 (sure, not so far away now, but fifty years in the future when the film was made) and that New York City now has a population of forty million. People are crammed everywhere – sleeping on the stairs of apartment blocks and in the abandoned cars that fill the broken roads. The protagonist, Frank Thorn (Charlton Heston), is a New York cop, sweltering in his tiny apartment. He watches an advertisement for the Soylent corporation promoting new “Soylent Green”, a miracle food said to contain ocean plankton. His room-mate Sol (Edward G Robinson) tells us of the days of his youth when food was real: the Greenhouse Effect has made everything “burn up”. The only food now is manufactured – Soylent biscuits and margarine. The rich, however, can buy fresh food from highly fortified shops; even meat is available “under the counter”. 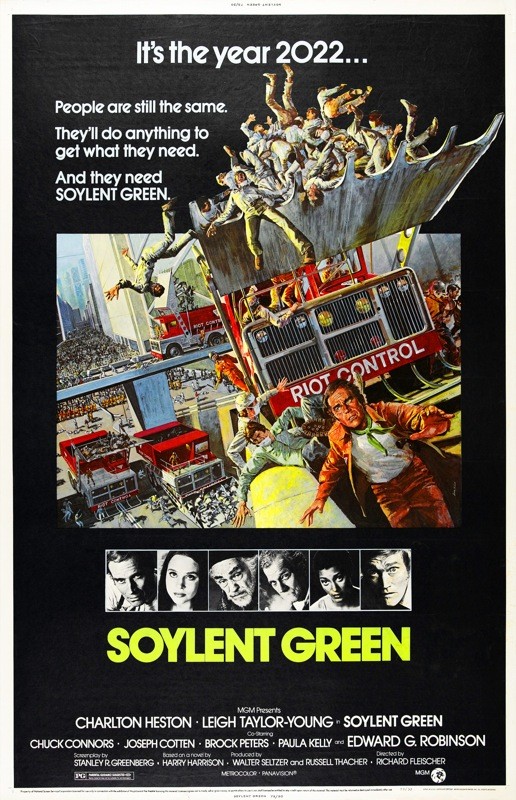 This is class warfare – the rich can eat real food from the rural areas, which are guarded like fortresses to protect them for the privileged. The poor must queue for water and whatever artificial fare the giant corporations manufacture. Meat itself is described as “something special” by both the shopkeeper and Shirl (Leigh Taylor-Young), the woman buying it for her rich lover, Simonson (Joseph Cotten). Shirl is considered “furniture” in that she comes with the apartment (Thorn asks “personal or building?”) and is only prized for her beauty and utility. This is classic commodity fetishism: she is a commodity, while the food she buys is personalised and admired. Shirl and the other “furniture” women are given one day off a month and can be beaten indiscriminately by the owners and building manager. On the street, crowd control consists of “scoops”: bulldozers which shovel rioters up and dump them into disposal trucks.

Thorn investigates the murder of Simonson, who has been slaughtered by a corporation assassin with a blow to the cranium, as happens routinely to cattle. Sol discovers from an oceanographic survey taken from the dead man’s apartment that the oceans are incapable of supplying the plankton supposedly used to make Soylent Green – it is in fact being made from the only protein still in good supply: dead humans. Sol is shattered and decides to seek euthanasia, called “going home”, at a luxurious establishment where people are, for once, treated with respect, as human, and euthanised to scenes of bucolic beauty and their choice of music. Thorn arrives in time to witness Sol’s death, and Sol begs him to expose the conspiracy. Thorn sneaks into the sanitation plant, a vast factory where people are turned into protein under high security. The bodies are dumped into a giant vat, and a conveyor belt at the other end bears Soylent Green wafers. Shocked at this objectification of human corpses, Thorn proceeds with no qualms to kill several factory workers who are trying to stop him: the sanctity of human life is not the issue, it is cannibalism of the dead that bothers him. After the required chase, he utters the famous words: “Soylent Green is people!” The final scene shows Thorn carried out on a stretcher, bloodied fingers in the air as he demands that “Everyone must be told”. But does anyone care? The credits roll over the same scene and music (Beethoven’s Pastoral Symphony) that Sol enjoyed when going “home”, the implication being that Thorn dies, while the people struggling to exist continue to demand their Soylent Green.

Soylent Green is a mixed form of cannibalism: the people who don’t hear Thorn’s message are “innocent cannibals” who continue to believe the plankton story, while those who do hear have little option but to ignore the message: like the stranded footballers in Alive, the poor can either eat dead people or starve. The abjection of processed corpses is probably of minor concern to the masses: barely eking out an existence, sleeping on stairwells or in abandoned cars, murdered at the rate of hundreds per day, herded like cattle and shifted with bulldozers when they complain. The disrespect of the dead, so shocking to Thorn who has discovered the good life in Simonson’s apartment, is mild compared to the suffering of the starving masses. Abjection is a luxury only the ruling class can afford. Class if everything for the living: a tiny minority of powerful men live in heavily guarded apartment blocks enjoying fresh food and “furniture” women, while the rest live in squalor. At death, though, all are equal: the same sanitation truck picks up (and pays for) Simonson’s corpse as anyone else’s. Rich and poor alike become crackers. 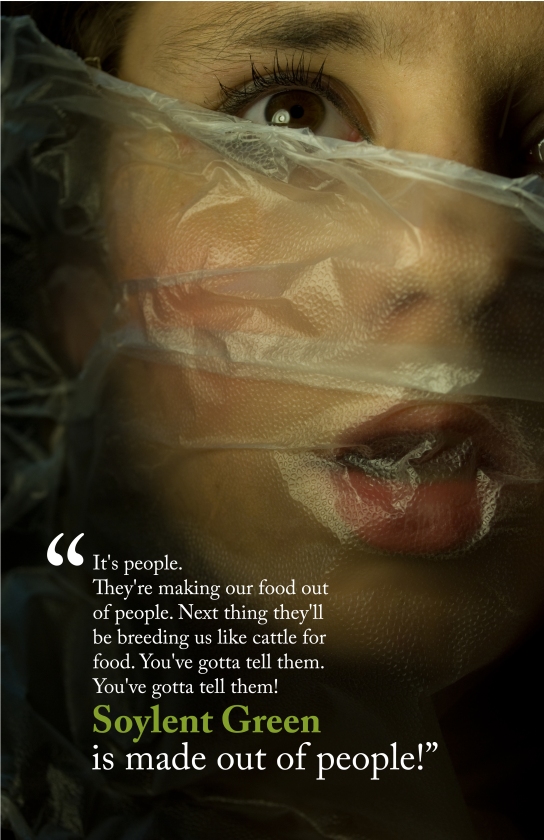 The reviewer John Puccio called Soylent Green “a movie based on an ending. And if you can’t figure out that ending ten minutes into the movie, you aren’t paying attention”. It is one of the most revealed spoilers of any film, with those who have never seen the film knowing the quote, thanks largely to a satirical version on Saturday Night Live. Despite this, I find the film still compelling; its vision of a near future dystopia caused by global warming, more relevant now than ever, offers a glimpse into the mirror: if what we fear comes to pass, would we eat the green crackers or instead choose to go “home”?

If you like my blog, please feel free to recommend it (with discretion) to friends on social media. If you have any questions or comments, you can use the tag or email cannibalstudies@gmail.com.