Venom is a character from the Marvel Universe, originally seen in Spider-man #252 (May 1984) as a living costume (honest!) then becoming a symbiote which took over Spidey (remember the black spider-man outfit?). So, if you’ll pardon the arachnid pun, this movie is a spin-off.

OK, so I’ll try to keep this short, because you’re reading this on the web (sorry, I just can’t help myself).

There’s a billionaire (Riz Ahmed from Nightcrawler) who wants to send us into space (not naming names, but there are about three such billionaires in the news at the moment). He sees the future of the species as more important than the lives of the marginalised people on whom he tests his drugs, and whom he “merges” with his aliens.

He has (had) a spaceship, which picked up some symbiotic forms from a meteor; one of those aliens caused the ship to crash on re-entry to earth.

We get the definite impression these things are not too human-friendly, as one of them kills the crew of an ambulance, in a scene that is highly reminiscent of Hannibal’s escape in Silence of the Lambs.

The main character is Eddie Brock (Tom Hardy, an extremely versatile English actor who was playing a Russian in a recent movie review, and is here playing an American). Eddie is an investigative journalist, which apparently requires a lot of chutzpah and some very fast motorcycle stunts. His fiancée is a lawyer named Anne Weying (Michelle Williams from lots of great movies, including Brokeback Mountain). Anne is working for a law firm that is defending the billionaire, but Eddy knows the password on her computer and finds out stuff he isn’t supposed to know about wrongful deaths caused by the company (didn’t we see that plot point on Billions?) 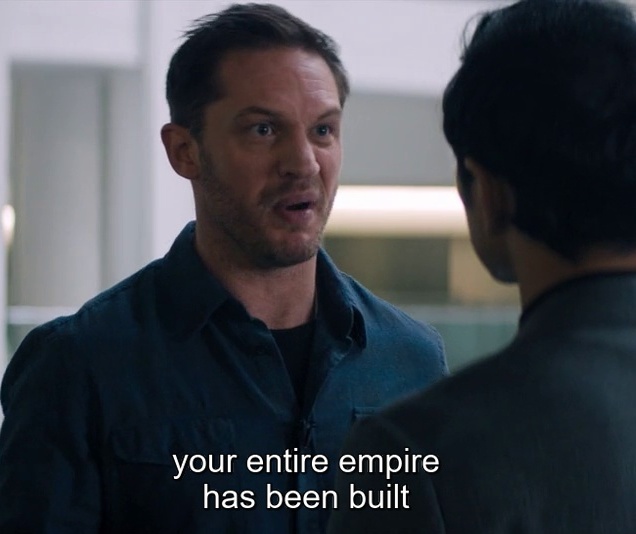 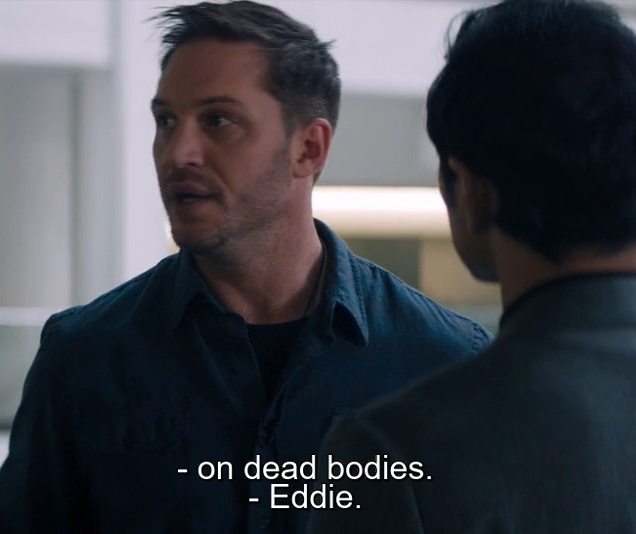 Anyway, he asks the billionaire difficult questions and he and Anne both get fired, because he clearly got the scoop from her. She breaks off the engagement, Eddie ends up down and out, and helpless – he can’t even defend his local convenience store manager from a dude with a gun who comes in for “protection” money on a regular basis.

But hey, there are symbiotes out there, looking for some human interaction, and they have teeth that would make the dental association wet themselves. The one that winds up inside Eddie is named Venom, one of the ones from the billionaire’s lab, and he has been through several hosts, most of which have died because they are not compatible. Then there’s the other one that killed the ambulance crew, and has since killed a lot more people, and he is mad, bad and dangerous to host.

Eddie being a nice guy leads to Venom becoming nice (ish) too and agreeing to oppose the plot to bring the other symbiotes to earth, where they intend to feast on humans – they’ve figured out there are plenty of us to go around.

Venom takes over a cute doggie and then moves into Anne, who comes to save Eddie from the bad guys, leading to an awkward kiss between him and the symbiotic version of Anne, now in slinky black alien shape.

Of course, to save Eddie, Anne has to take some fairly drastic action, in her Venom persona.

There are some great action sequences involving bikes and drones and cars (leaping off the ground in standard San Fran car chase mode) and a pretty awesome battle between Venom and the nasty alien.

Everyone thinks  the aliens have gone, but in fact Venom is still inside Eddie and they are now true sybiotes: two beings in one body. He can turn back into Venom when required, and Venom is almost always hungry, and he doesn’t like dead meat.

So we come to the point of having this movie in a cannibalism blog. They come to an understanding: they won’t eat any nice humans, but very, very bad ones – that’s fine. 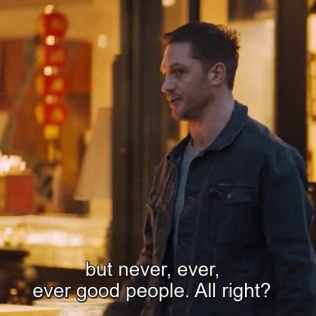 A succinct statement of the ethics of cannibalism. Hannibal would have amended it to “rude people”, but philosophers get to make their own ethical maxims. And so it is that he, or they, eat the rude, violent dude in the convenience store.

Look, it’s not a great movie, and the critics were quite rude, with a pretty ordinary score of 28% on Rotten Tomatoes. The movie-going public felt differently, and the box office so far is over $850 million, which is an almost mind-boggling figure, even for a movie in which the hero bites off people’s heads. I guess people love to see (other) humans being eaten. Is this a cannibal movie? Well, half the main character is human, so I guess it’s half a cannibal film.

So what’s next for a nice guy who occasionally becomes an alien cannibal and eats rude people? Hannibal would approve of Venom’s answer:

“The way I see it, we can do whatever we want”.

IF YOU LIKE MY BLOG, PLEASE FEEL FREE TO RECOMMEND IT (WITH DISCRETION) TO FRIENDS ON SOCIAL MEDIA.
IF YOU HAVE ANY QUESTIONS OR COMMENTS, YOU CAN USE THE TAG, OR EMAIL ME  ON CANNIBALSTUDIES@GMAIL.COM.