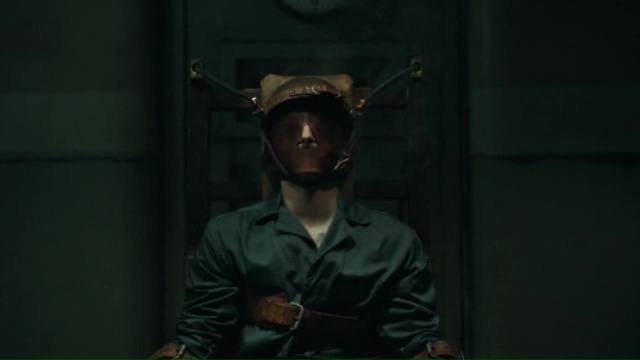 Will is awaiting trial, and the FBI has offered a plea deal – but if he fights the case and loses, he’ll face the death penalty. The electric chair. We see him in that chair, smoke rising from his corpse, as the clock ticks – backwards. Like Vertov’s bull in Kino-Eye, he comes back to life. Then we see the executioner – it is Will himself, looking serious, and quite spiffy, in a suit.

He’s clearly anxious about the trial.

He buttons himself into a suit; so does Hannibal. They dress to the dalla sua pace aria from Don Giovanni. It is a song of anxiety – Donna Anna has asked her fiancé, Don Ottavio, to kill Don Giovanni in revenge. But all Ottavio can do is worry about her state of mind. Hannibal is feeling a bit guilty too perhaps, or is this his design? Anyway, he is creating a protégé from young Will, and doesn’t want electric chairs getting in his way.

Hannibal puts on cuff-links, while Will has hand-cuffs. Easy to confuse the two words. 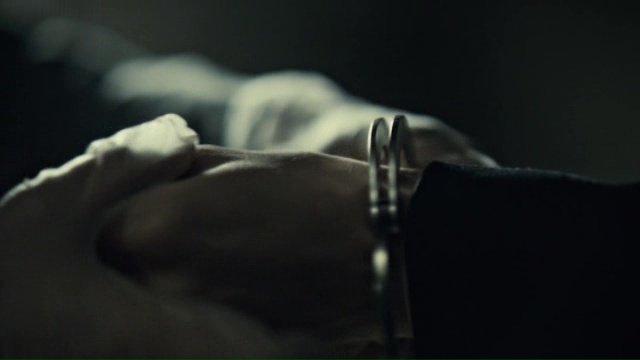 The Prosecution argues that Will killed and ate Abigail as her father had planned to do. Her father killed girls and ate them, so then did Will. The crime, although it’s a murder trial, is clearly cannibalism. 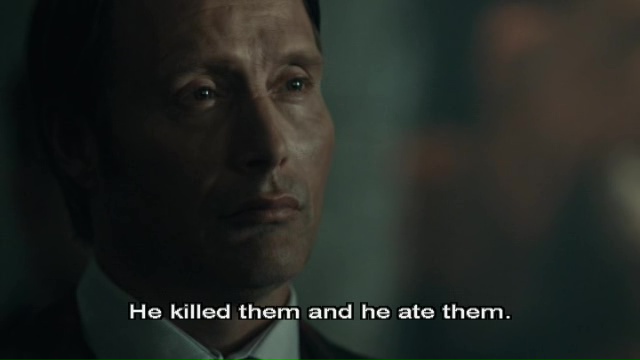 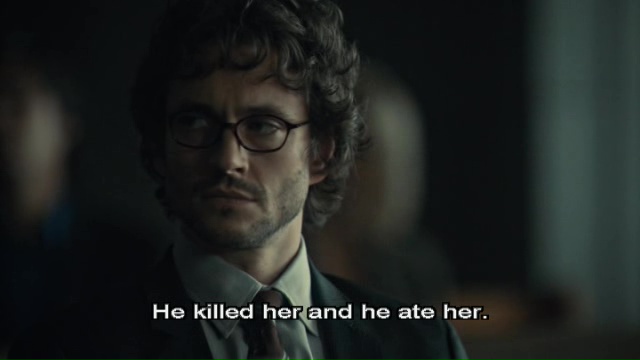 Jack is called as a witness and dumps on the FBI case, taking the blame for pushing Will too hard, and pleading the Hannah Arendt defence: Will had objected to the name “museum of evil minds” because 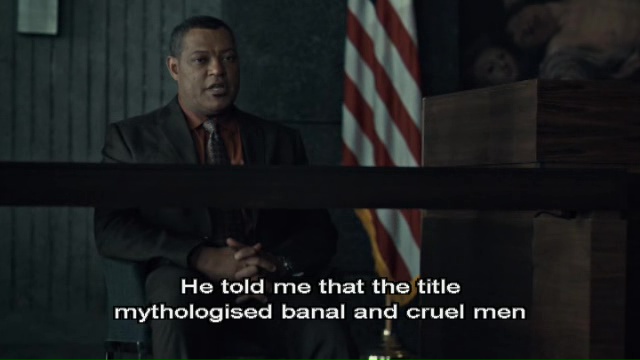 Will’s Defence lawyer opens an envelope and another ear falls out. 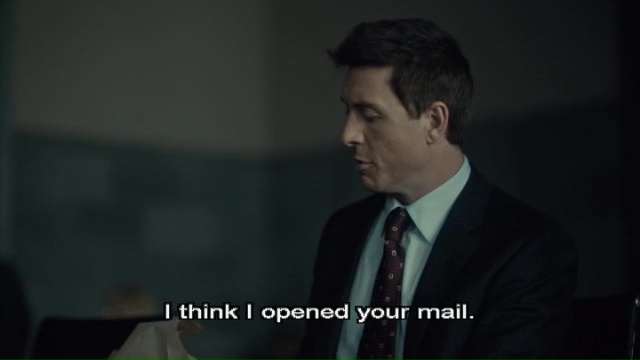 Hannibal’s diagnosis: there may be another killer. He has sent this ear to help you prove you are not guilty. He is an admirer. Will is incredulous – an admirer?

Hannibal speculates that the killer wants to be seen. Why?

In court, it’s not getting better though. Freddie tells how Abigail believed that, like her father 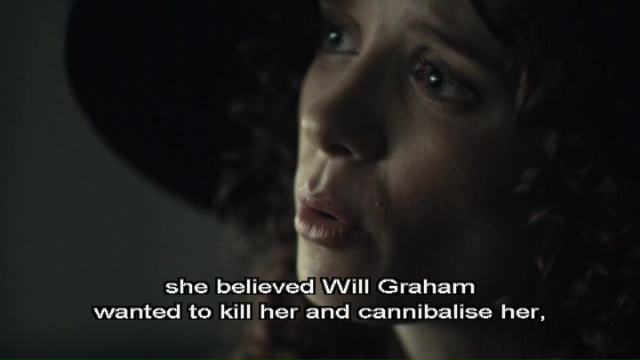 Chilton gives damning evidence, and uses Clarice’s line about Hannibal from Silence of the Lambs: 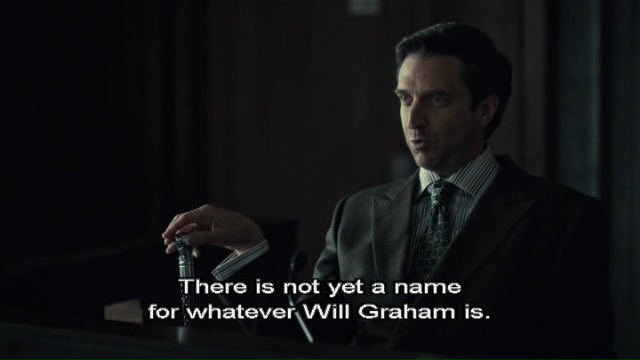 Hannibal takes Will a folder of crime scene photos from the latest murder – the court bailiff who was killed: found burned, mounted on stag’s head, Glasgow smile and ear lopped off. The team are calling it “Will Graham’s greatest hits”. Will does his pendulum thing (obviously feeling much better) and sees himself kill the dude, but without it being, you know, personal:

But Will sees that this is a different killer:

“Cassie’s lungs were removed while she was still breathing. Georgia was burned alive. What I found of Abigail was cut off while her heart was beating.”

Hannibal admits he knew that, but wants Will to use this as a defence, even though it’s a lie. 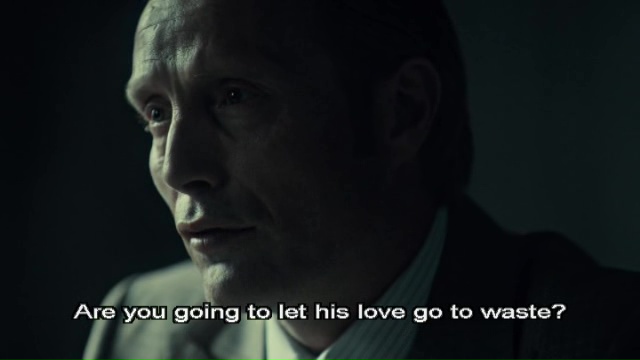 Hannibal gets on the stand, and takes the oath, but Will sees through him.

Hannibal lies for Will, saying it’s the same killer. It’s love, or as the prosecutor says, “his personal beliefs and biases are driving his conclusions.” 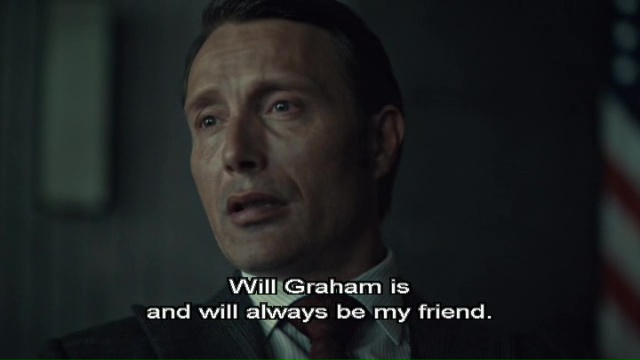 The judge tosses out the defence. Hannibal is pissed. Not in control.

Bad idea, judge. He is found holding the scales of justice. His brain on one side of the scales, his heart on the other.

But there will be a mistrial. Will has a reprieve. For now.