Although film directors have revisited colonial era stories of cannibalism with gusto, they have generally done so with modern perspectives. Cannibals in most films, therefore, are not the inhuman savages of Daniel Defoe, Edgar Rice Burroughs or Edgar Wallace. The ‘savages’ in even the earliest films are often presented with humour, for example Lupino Lane’s Be my King (1928), Crosby and Hope in Road to Zanzibar (Schertzinger 1941) or The Wrong Box (Forbes 1966) in which amorous cousins Michael and Julia are reassured that she is not a blood relation: she was adopted after her missionary parents were “eaten by his bible class”. In more serious depictions, the ‘savage’ is either a noble one, or at least is offered some humanity, and often his characterisation (we rarely see female savages) is given an ironic edge to criticise modern, “civilised” society. However, a positive image can be as degrading as a negative one. 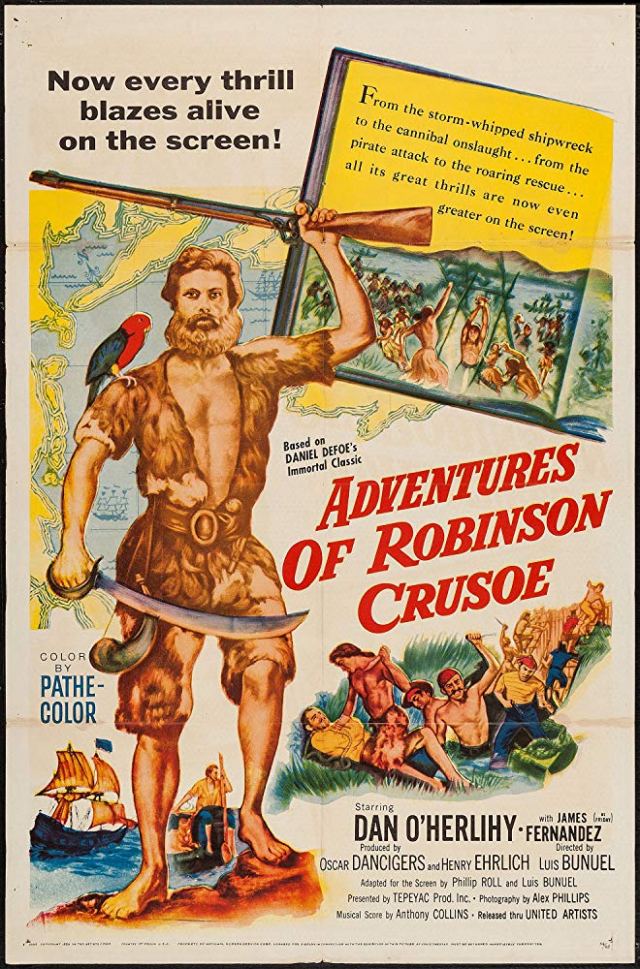 The example here of the cannibal as colonised savage is Luis Buñuel’s Robinson Crusoe (1954). Crusoe is, according to James Joyce “the true prototype of the British colonist… the manly independence, the unconscious cruelty, the persistence, the slow yet efficient intelligence, the sexual apathy, the calculating taciturnity”.

Buñuel opens his film of the eighteenth-century novel with a shot of Defoe’s book sitting on an ancient map, a nod to the importance to film makers of classic literature. Crusoe (Dan O’Herlihy, who was nominated for Best Actor at the 1955 Oscars) tells us he was on a voyage

when his father’s warnings of disaster came true; we next see him struggling ashore amid the debris of his lost ship. The island, or at least a severely constrained and isolated space, was considered a prerequisite for cannibalism in the eighteenth century. All his shipmates, or at least the human ones, have been consumed by the sea. Barefoot and hungry, he cracks an egg he finds in a nest, but his European sensibilities do not allow him to eat the baby bird inside.

Unlike the savages he is yet to meet, he has little hope of surviving in the wild, but is saved by finding and plundering the wreck of his ship, salvaging building supplies, guns and flint to make fire (more important, he realises, than the gold in the drawer below). His whole focus is to secure himself against the wild world: beasts and savages. Although this is a long way from his early surrealist movies, this is still classic Buñuel, particularly the fever dream, reminiscent of his later films The Discreet Charm of The Bourgeoisie and Belle De Jour in which his giggling father pours water on a pig, while the delirious Crusoe begs for a mouthful.

On the island, European civilised life is represented by Crusoe and his weaponry, and Rex, a dog who has also swum ashore. He finds in a ship’s chest a cure for

tobacco and the Bible.

Buñuel seems to have felt Crusoe’s pain – he had been exiled from his native Spain for 14 years when he made the film, and was living in Mexico, having lost his job in MOMA after being denounced as a Communist. His longing for home while surrounded by “the other” is obvious in his character’s affection for the dog, while he is quite prepared to shoot birds and stamp on rats and spiders. He domesticates native goats and parrots, but is devastated by the death of Rex, feeling “now truly alone”. Sinking into eccentricity, he talks to two insects, “my little friends” and feeds them an ant.

But his difficulties on deciding which species of insects are friends soon escalates as Crusoe has to decide which humans deserve to be saved, and which sacrificed. The difference is their status: as cannibals or victims. His reunification with humans after 18 years comes as we follow his footsteps along the beach, only to be confronted with another distinctly human footprint. His abjection is immediate.

“Men-eaters! From that very land I had once thought to sail to. Revolted, horrified, all that night I watched the cannibals at their ghastly entertainment”.

Their guilt is assumed, but only confirmed after they leave and he comes across their fire-pit which is surrounded by human heads and bones: Typically, cannibal literature paints a “primal scene”, the proof of cannibalism, which is usually not the act of eating human flesh, but the aftermath. 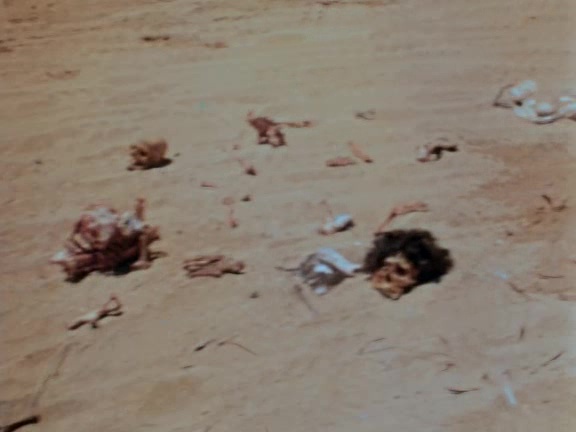 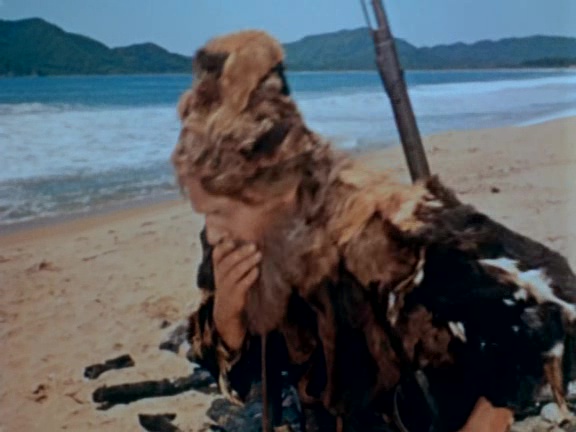 Crusoe plots a technology-based massacre, including another dream sequence, this time of planting a bomb under their fire-pit, but realises

“I had no heaven-sent right to be judge and executioner on these people, who had done me no injury. I would leave them to God’s justice”.

This resolve is short-lived; seeing Friday (Jaime Fernández, who won a Silver Ariel award – the Mexican equivalent of the Oscar) escape from the cannibals, he steps in to kill the pursuers and rescue the boy. Friday bows to him in a homo-erotic scene in which Crusoe puts his foot on the boy’s head.

He explains that the boy will be called Friday, while Crusoe’s name is “Master” and that they are “friends”. The boy spits out Crusoe’s carefully harvested and baked bread, indicating that he would rather dig up the pursuers whom they buried earlier.

Crusoe sits up all night in fear of this new “friend”: “if the cannibals fail to come at me before morning, he might”. He won’t let Friday handle weapons; he shoots birds out the sky to frighten him and puts a strong door on his cave so he can sleep securely. He is reassured to watch Friday eat the flesh of animals, “knowing that the only source of that other meat he so relished” 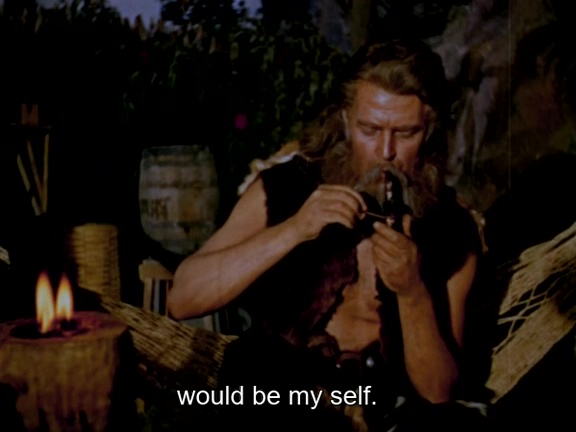 He comes to appreciate once more having a servant. The balance of alterities, man to animal, civilised man to cannibal, master to servant, has been restored, yet his fear of the primitive cannibal increases. When Friday sneaks into his room hoping to try his pipe, Crusoe decides to put leg-irons on him, remembering how he had intended those instruments to be used on the savages he planned to carry off to slavery. But Friday is misjudged: “Friday love Master always.” He seizes Crusoe’s gun, but it’s a suicide plan – “kill Friday – no send Friday away.”

In a moment that crystallises the dreams of empire, Friday has become the good savage, brought to civilisation by the white man, even feminised when he finds a dress in Crusoe’s chest. The primitive cannibal has submitted to our will, but lovingly, in gratitude rather than through force. In the next scene, Friday is armed and helping hunt wild pigs, with Crusoe’s admission that Friday was “as loyal a friend as any man could want.”

But if Friday is to take on Crusoe’s civilisation, he must also accept his morality. Friday finds Crusoe’s gold coins and thinks them a gift from God. “From the devil”, Crusoe mumbles, but Friday goes off to make a necklace with these baubles, which in this closed circle are of value only to the savage. While they shave each other and share a pipe, Crusoe tries to explain the devil and his works – he also has evolved, or converted, from conquistador to missionary. Yet he is baffled by Friday’s broken epistemic posing of the problem of evil – why doesn’t God just kill the devil? Why is God mad when we sin, if he lets the devil tempt us? Friday, the innocent, the savage, baffles Crusoe, the colonialist, expressing Buñuel’s overt anticlericalism. 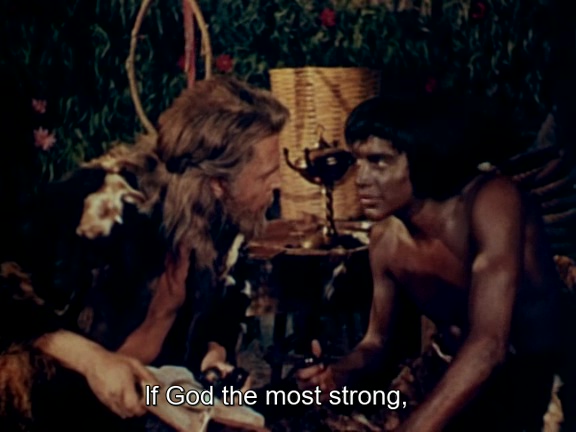 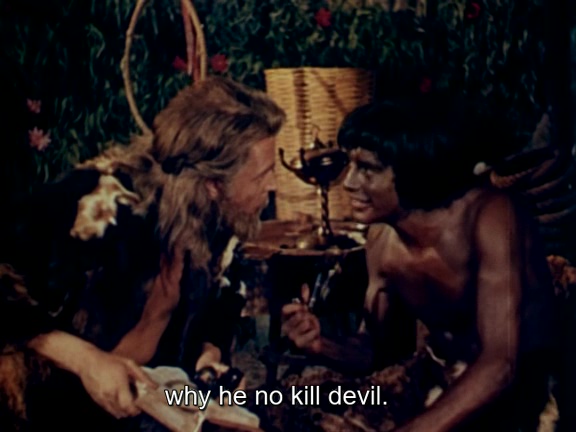 They are set upon by the cannibals and Crusoe is saved by Friday’s gun, just as Crusoe’s gun saved Friday years before. The civilised savage fights the cannibal savages for the life of the Englishman. His gunpowder exhausted, Friday kills the third cannibal in hand-to-hand combat, but the beach is swarming with others. Their preparations for a last stand are interrupted by gunfire; to their amazement the beach is now full of white men who are slaughtering the fleeing cannibals. Like Friday’s foes, these white men have prisoners tied up – their ship’s captain and bosun, against whom they have mutinied.

Friday and Crusoe free the prisoners, who agree to take Crusoe and “my man” to England if he helps them recover the ship, which of course they do in due course, tempting the ‘civilised’ mutineers, like the devil, with Friday’s gold necklace. 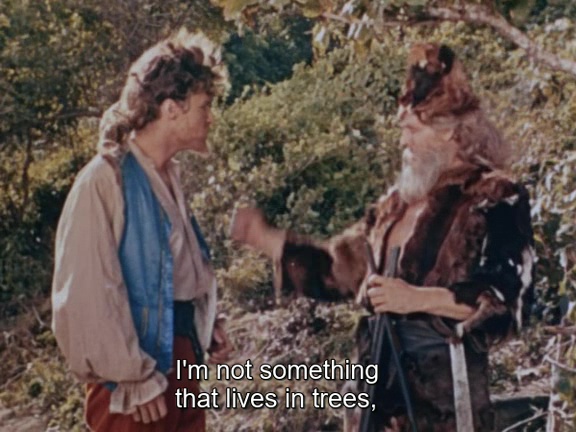 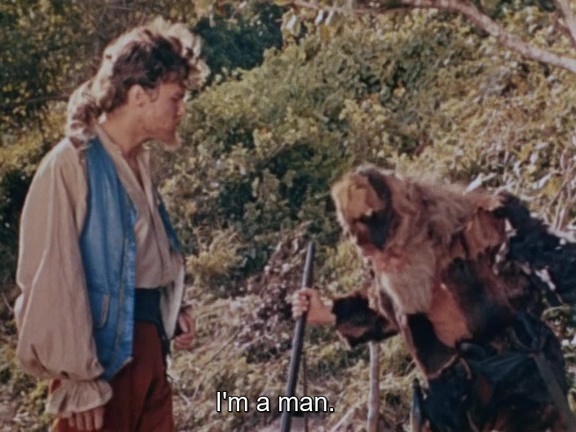 Dressed like an Englishman again, Crusoe makes a melancholy farewell to his kingdom. He has defeated the evil of the savages and the mutineers, whom he leaves to rule his kingdom.

Friday has witnessed the violence and oppression of the “civilised” white men, but avers that he is not afraid to go back to civilisation “if master is not”. He is already dressed as a servant. The cannibal can become tame, can learn to eat what he is told, but clearly he can never become “your own kind.”