The Donner Party was the name given to a group of pioneers heading from Missouri to California in 1846. They became snowbound in the Sierra Nevada over winter, and famously turned to cannibalism to survive. Only 48 of the original 87 members of the party survived.

There have been quite a few films and books about the events of that winter, including documentaries such as “Trail of Tragedy: The Excavation of the Donner Party Site by US Forest Service” and an episode of the PBS series American Experience (Season 5 Episode 3) called “The Donner Party” (you’ll need a VPN if you are outside the US). There are also a few supernatural potboilers like Donner Pass, about evil forces that turned poor George Donner and his mates into ravenous cannibals, and will do the same to any nice-looking millennials who stumble into the region. I am not intending to write about them until I run out of movies about “real” cannibals, which looks like it will be in several years, at the present rate.

Look, this movie doesn’t mess about with any set up. The opening is some written explanation of how they got into that mess

Then there’s a dude, who turns out to be William Eddy (Clayne Crawford) pointing a gun, with his voiceover

“In situations like this, some men may abandon their obligations. This being said, I am resolved to provide for my family.”

He goes back to camp with some meat (a bear? In winter?) which he shares with William Foster (Crispin Glover from lots of things including Back to the Future and American Gods). Eddy is the group’s guide, and feels that he was pressured to lead them the wrong way, onto the Hastings Cutoff; Foster argues that they all agreed to take the “short cut”. The audience by this point is yawning. From there, as Homer says, “it just gets worse and worse”. The Foster camp is running out of food when the “rescue party” reappears – with no rescue and no food. One of them dies on arrival and they bury him in the snow. Clearly, they had never seen Alive! Once you die, you’re assigned to the frozen food department.

But as they set out for a last ditch expedition, later called “The Forlorn Hope”, Foster boasts that they have maintained a “clear line of civility”. We know from history that this won’t last.

There is talk of going back to the camp, but Franklin Graves (Mark Boone Jnr from Sons of Anarchy and Memento) disagrees.

As they get colder, hungrier and weaker, Foster suggests what we’ve been waiting 51 minutes to hear:

“In the misfortune that one of us should pass, in death we may save the living.”

In a scene worthy of Monty Python, they all start volunteering. Eddy suggests he and Foster

“fight to the death, the loser dies like a man, feeds the group”.

Instead, they draw straws – Dolan (Crispian Belfrage – who is a bit wasted in this flick) gets the shortest stick and Foster shoots him (not what really happened, BTW). Eddy refuses to join in the lottery or the meal, but then it turns out he has a lump of bear that his wife smuggled into his backpack, so he’s doing OK.

Graves stabs himself and becomes the next course. Before each meal, they say grace and thank God for what they have received. When they run out of those guys, Foster decides, against Eddy’s opposition, that the “Indian” guide will be the next course. This is the hierarchy of eating – the plant, the animal, the human, with the sub-human squeezed in there, defined by layers of contemptuous racism that was standard procedure in 19th century America (and in some places still is). Rather than wasting bullets, he uses the gun as a club.

There are long scenes of the group trudging through the snow, interspersed with the survivors sitting around the campfire chewing on some guy and looking vaguely disgusted, but not looking all that gaunt. I guess it would require some pretty good makeup or CGI to make someone look to be genuinely starving, so I can accept that.

What I found disappointing was the total lack of moral debate – one person complains “we’ll go to hell” and Eddy points out that the “Indian” is a man, but still hands the rifle to Foster so he can do the deed. Foster, the gentleman, points out that he is their only hope because he is the only one willing to do whatever it takes. The fascination of the movie Alive! was the deliberation in the plane of the ethical situation, the immortal soul having fled, etc. This lot are devout enough that they could make it a lively discussion, the nature of humanity, why they think it’s wrong to eat white people but not “Indians”, but it never gets past the look of distaste as they chew on bits of other humans. The best scene is the long shot of Foster, the man of God, the keeper of civility, turning into a cannibal king as he watches his flock, waiting to see who will die next.

It’s a fictionalisation of a true event, which is always fraught, because the historians will object to the inaccuracies, and everyone else to the squalid reality. But as an imagining of one incident from the Donner story (Donner himself never gets a look in) it’s not a bad taste of nineteenth century morality and its fragility. The disappointment is that the cannibalism is direct and honest, but never considered as anything other than abject but necessary. This is one of the defining stories of modern America, and much more could have been made of it. However.

Now, I’ve seen some great cannibal films and some pretty awful ones, and I don’t always agree with the verdicts of the reviewers on Rotten Tomatoes, but I think this is the first one I have seen where none of the reviewers even bothered to see it.

“Overall The Donner Party was a nice change from the hard core horror films that I usually watch. … I also recommend that you have something to eat on hand while watching it as I was starving by the time I was done watching it. Then again, maybe I have issues.” 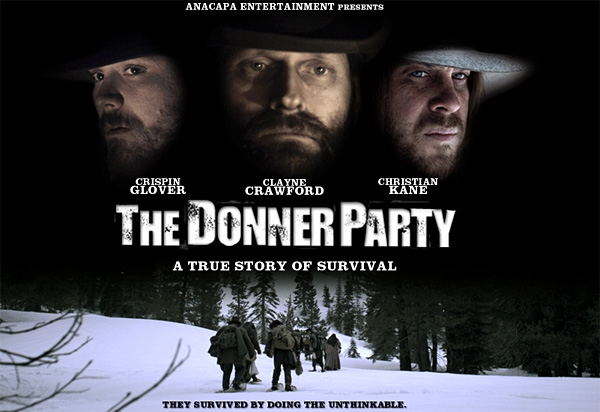