The Simpsons is still one of the smartest and funniest shows on TV, even though it’s now in its 29th season (really!). Every year since 1990 they have brought out the Treehouse of Horror for Halloween, and every year they have tried to exceed the horror, abjection and disgust of all the previous years.

This last one, XXVIII, was regarded by many fans as the ultimate. In a nutshell (it’s awful hard to avoid food puns in a cannibal blog), Homer accidentally slices off his fingers, they fall onto the barbecue, and he finds the taste irresistible. As the family is away, the situation (as always with Homer) escalates. Flanders invites him over for a meal, but he refuses to eat Flanders’ meat, preferring his own: 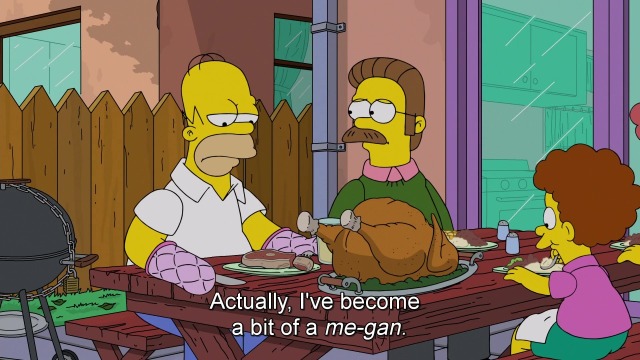 One of the truly great Simpson puns.

It’s not the first time The Simpsons has approached the subject: in Treehouse of Horrors V,  misbehaving students at Springfield Elementary were ground up into meat and served as lunch. But this is fascinating as it is both scrupulously not gory (the slicing is always devoid of any blood or even pain) and yet conceptually manages to deliver the shock value that the producers sought.

As one fan tweeted:

One thought on “Homer Simpson: the (self) cannibal: “Treehouse of Horror XXVIII” (2017)”