The new trending hashtag on Twitter is #EatTheBabies. Why?

A right-wing group of climate change deniers decided to prank US House of Reps member Alexandria Ocasio-Cortez at a meeting in Queens this week, by getting a woman to stand up and insist that the only way to stop climate change was, as her t-shirt says 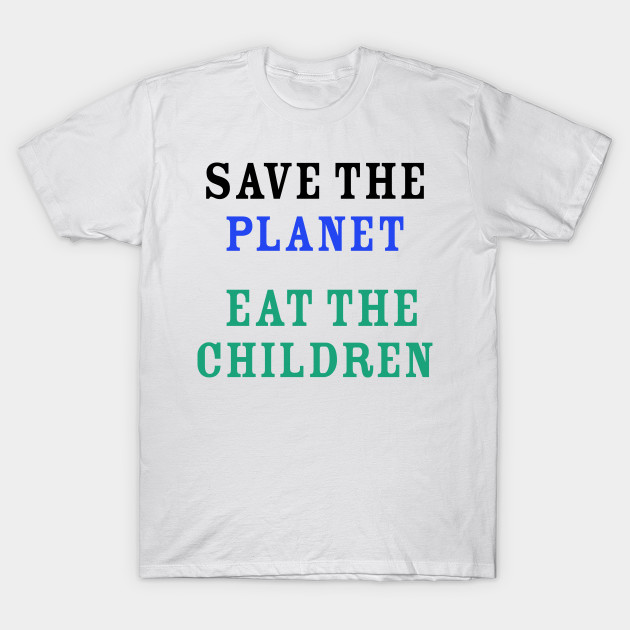 “We got to start eating babies! We don’t have enough time! … We have to get rid of the babies! … We need to eat the babies!”

Yes, of course, the t-shirt is widely available on the Internet now.

Besides being a cannibal story, and getting the Republicans to accuse AOC of not denying she ate babies (really!?), it also reminded a few people of an episode of The Simpsons, in which Chief Wiggum warns the kids off drugs by showing them a drug-addled hippie who has:

the munchies for a California cheeseburger

It’s Season 8 episode 25, “The Secret War of Lisa Simpson”, in which Bart is sent to military school, and Lisa follows because she wants a challenge, only to be met by extreme misogyny by the other students. You can watch it on-line at daily motion, although the video is reversed (i.e. mirrored) which makes all the writing back to front, but at least puts Homer’s steering wheel on the right side of the car.

This was not the only stab at cannibal themes in The Simpsons, but the others were in the Treehouse of Horrors specials, where you expect those sort of things.

So that’s a good enough excuse for mentioning AOC’s run-in with cannibalism on a film/TV cannibalism blog, isn’t it?

Meanwhile, last month a Swedish scientist caused an uproar for mentioning cannibalism and climate change in the same Powerpoint presentation at a Gastro conference. Discussing food shortages that are likely to result from the warming of the planet, behavioral scientist and marketing strategist Magnus Soderlund from the Stockholm School of Economics asked for feedback (sorry) of what sort of foods people would be willing to eat, including, at one point, human flesh. This was quickly turned into sensationalist headlines around the world, including  Fox News, which said “Swedish Scientist Floats Eating Human Flesh as Solution to Global Climate Change,” and the London Evening Standard, whose headline read “Scientist Suggests ‘Eating Human Meat’ to Tackle Climate Change.”

Snopes has a detailed look at this story, although it is hard to work out exactly what Soderlund said, since it was in Swedish. But in a statement after the shit hit the fan, the scientist stated:

I do not want to eat human meat, I do not want to be eaten, I do not think that eating humans influences the climate, I am not an activist, I am just a researcher who thinks that it must be possible to ask questions about also the dark sides of what we humans do and do not do.

Amen to that. Let’s also ask WHY we eat what we do, and are disgusted by what we don’t. That’s worth considering, in any language.