Parents is a real cannibal film. None of these feeble excuses about starvation or uncontrollably psychotic – here are people who enjoy eating tasty animals, and their chosen tasty animals are humans.

Parents is a Canadian/American production, the first feature film directed by Bob Balaban, who you will recognise from the Christopher Guest movies like Best in Show if you can be bothered to search for a picture of him. He’s a funny guy, and Randy Quaid leads a terrific cast, but the movie never quite got off the ground, scoring a measly 50% on Rotten Tomatoes, with Roger Ebert writing that the movie couldn’t really decide if it was satire, comedy, or horror.

The satire is of the complacent fifties family, Mom at home, Dad at work, kid at school. The kid is Michael, played by a child actor who later made a fine career in Canada as an accountant, another commentary on the film, perhaps. He is traumatised by his family’s move to suburbia, by his increasingly gory dreams, and by seeing his parents having sex (he thinks they are biting each other – if only Freud had hung around long enough to make a cameo).

Michael’s Dad works at Toxico, a fine American corporation making toxic substances to defoliate jungles, and his particular job is working with human corpses, those who have donated their bodies for the good of science. Well, a man has to bring home the bacon, and Dad surely does, straight from the long pigs. Michael begins to suspect that their meals are what Nietzsche called Human, All Too Human after he sneaks into Toxico and sees Dad cutting up corpses. But he can’t get a straight answer out of his parents:

“What are we eating?”
“Leftovers.”
“Leftovers from what?”
“From the refrigerator.” 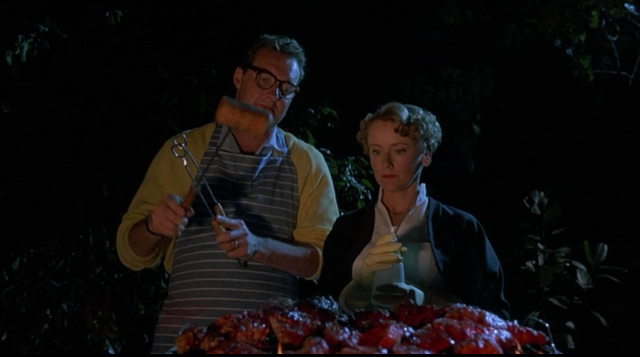 So it’s comedy. But when Michael’s sceptical social worker takes him home and finds a body in the cellar, shit gets real. There is much death and bondage. Dad tells Michael he is an “outsider” like them, and that if he can get people to believe him, they will all burn. “Is that what you want?” He tells Michael “I’m sure you’ll acquire a taste for it. Your mother did.” She flashes a pretty fifties advertising smile: “I learnt to love it.”

Michael demurs and ends up bound up by his father like Isaac on the mountain with Abraham. Talk about sacrificial discourses! He manages to turn the tables, without the aid of angels and/or rams, and well, the fire happens.

Michael ends up living with his (also archetypal fifties) grandparents who tuck him into bed and leave him a rather suspicious sandwich, in case he gets peckish during the night. Like all of us, he has moved on from his parents, but not from the patriarchal and carnist violence that helped to form him, us, and our polite, blood-soaked culture. 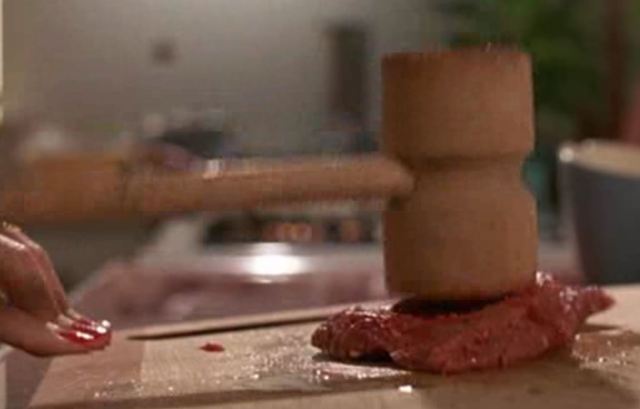