Anders Thomas Jensen directed this Danish black comedy, which is only really listed early in this blog because it stars – yep, that really is him – Mads Mikkelsen, better known to readers of this blog, I daresay, as Hannibal Lecter in the television series Hannibal (2013-15).

Svend (Mads Mikkelsen) and Bjarne (Nikolaj Lie Kaas) work in a butcher shop, but are browbeaten by their mean boss, “Sausage” Holger (Ole Thestrup), who says Bjarne’s pate tastes like jockstrap, and even disparages Svend’s marinade (believe it or not, this becomes an important plot point). Holger opens the film with a great summary of animal agriculture:

“I’ve always been fascinated by sausages. It’s almost mythological to kill an animal and then mock it by sticking it in its own intestine. Can you imagine anything worse than being stuck up your own ass?”

They can’t stand this rude dude, so they start their own butcher shop (slagtermester). Bjarne has problems: he smokes twenty joints a day and kills animals so he can collect their skeletons. But it turns out he is the saner of the two partners. 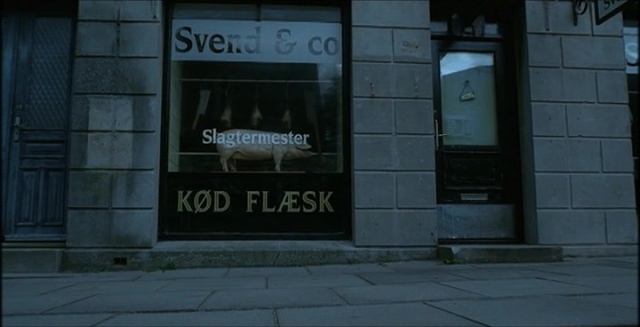 Their grand opening attracts a total of zero customers. Next morning, Svend does not have a good day: he breaks up with his fiancé and then discovers that he has inadvertently locked the electrician in the meat freezer all night. What to do with a frozen electrician? Holger appears, demanding fillets for the Rotary dinner, and Svend panics.

Next day, the guests from the Rotary dinner are queueing up outside the shop – they all loved the fillets. Business is booming and, as Svend says, we had to get rid of him, one way or another. The electrician becomes “Svend’s chicky-wickies”. Then the real estate agent turns up, wanting a tour of the premises. So it goes.

It’s an accidental Sweeney Todd. They meant no harm, and are just being rewarded for bumbling incompetence. And isn’t that the way the world really operates? The Peter Principle!

Then the local pastor reveals that he didn’t like the Rotary dinner. It reminded him of his wife. The wife he had to eat after a plane crash on their honeymoon. Yes, it’s not just Danish Hannibal, it’s also Alive! 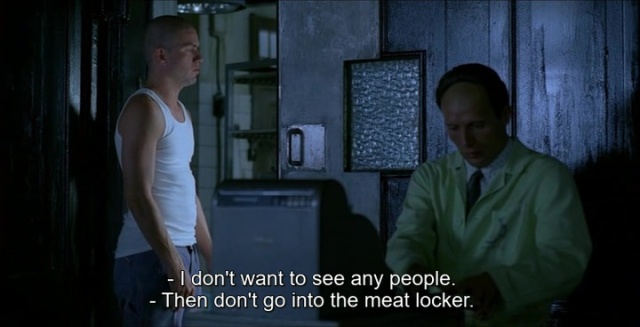 Mads Mikkelsen is very good in the role of the nervous, sweating, irritable Svend, although it’s hard to reconcile this farcical character, and his extraordinary haircut, with the cool, sophisticated and brilliant Dr Hannibal Lecter, let alone Le Chifre in Casino Royale or even Kaecilius in Dr Strange. 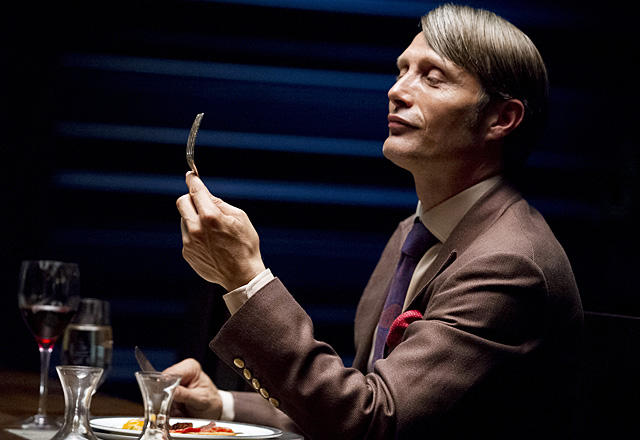 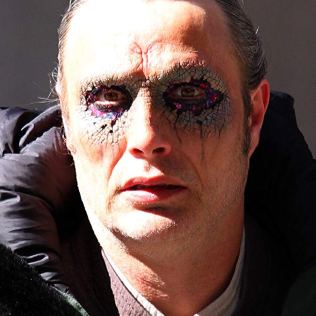 By the end of the film, we are asked questions of perception: what is appetite? What is “meat”? Is the secret in the sauce? Is that a wig?

The promoters had no idea what to do with this film. Check out some of the posters – hard to tell that they are for the same thing!

It’s a quirky comedy, pleasant enough and inoffensive, unless you are offended by either butchers or cannibalism. If you are equally offended by both, then perhaps it has done its job well.