As you probably know by now, the episodes in the series Hannibal are named after courses in fine dining. Episodes one and two were the pilots, the ones that established the characters, let us in on secrets they didn’t know, and gave us a taste of what was to come. No on-going story arc you could really get your teeth into though.

Episode 3 is called “potage” which is a thick vegetable soup. Can’t really get our teeth into soup, but it is very nourishing and warming. It looked in the earlier episodes as if this was going to be an episodic show: the secret cannibal would lead the hyper-empathetic FBI Special Agent to capture some single-episode outsider – a serial killer whose whole purpose was to be caught by this team while we giggle and point like kids at a pantomime: look Mum, they still haven’t seen the real bad guy! But there is no new serial killer introduced here. This episode is all about Abigail Hobbs, the orphaned daughter of the serial killer shot dead by Will Graham in the first episode. Her father cut her throat before Will filled him full of lead. The mushroom man from episode 2 tried to kidnap her to feed his mycelium. Now she has woken up, to a lot more than the FBI has managed to figure out.

You may remember from episode 2 Hannibal saying:

“I feel a staggering amount of obligation. I feel responsibility. I’ve fantasised about scenarios where my actions may have led to a different fate for Abigail Hobbs.”

Now he gets his chance. Abigail is becoming a surrogate sister to Hannibal who later will admit to eating his real sister Mischa (not to killing her though). He accuses Will of making her a surrogate daughter, which Will does not deny. 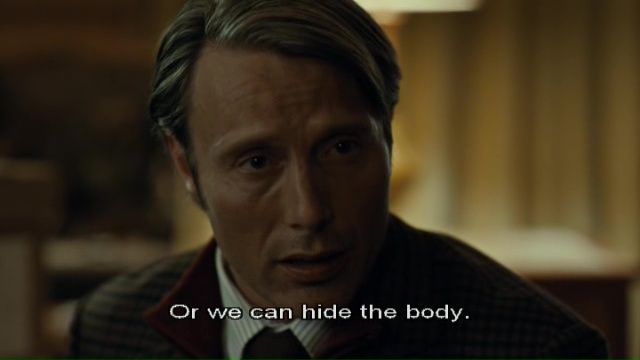 Abigail is smart and sassy and a step ahead of everyone at the FBI, even though she is still deeply traumatised by the death of her parents. In a flashback, she is seen hunting with her father, shooting a deer. She asks him the questions that perhaps we have all asked our parents at some time: was it OK to kill? Wasn’t that deer smart? Don’t they care for each other and their environment? All the reasons we give to valorise human life, applied to those who are like us. 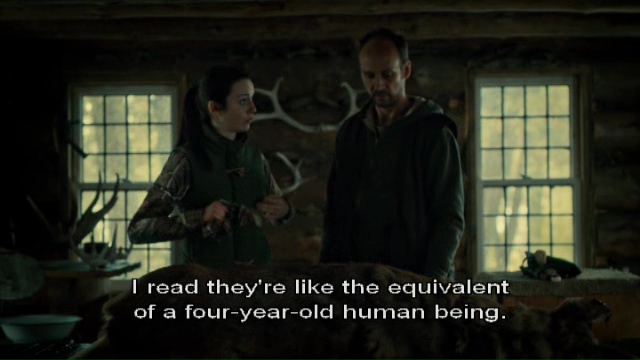 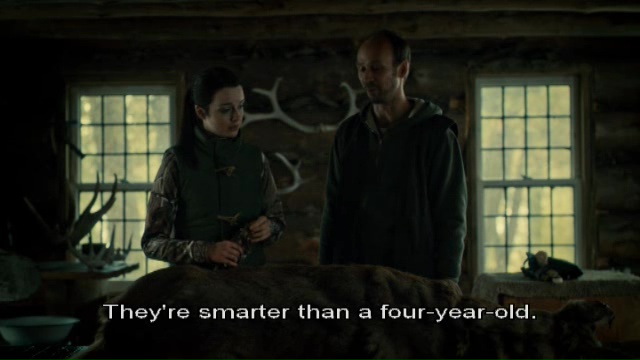 Her father loved her dearly and hated that she was growing up and would leave him. His response is to kill young girls who look just like Abigail, because he can’t bring himself to kill her.  He answers her question, in a way, saying that he is “honouring” the deer by using ever part of her. This is the carnivore cop-out: as long as the kill is clean and the corpse not wasted, then it’s OK to kill. Her father feels the same way about eating young women; Hannibal feels the same about eating rude people. When Abigail expresses doubts about eating the doe, her father grabs her arm: eating her is honouring her, otherwise it’s just murder. The logic of the serial killer. And factory farm corporation.

Will, Hannibal and Alana take Abigail back to her home where her mother and father died and she almost died; someone has scrawled graffiti all over the doors: the word “cannibals”.

And there is another complication – the brother of the girl killed by the copycat (really Hannibal of course) has come to accuse Abigail of murder, since most people (including Jack Crawford) consider her an accomplice to her father. Then there’s her best friend from school who tells her that everyone (else) thinks she’s guilty. The extras all end up dead (Abigail, like her surrogate brother Hannibal, wields a mean knife) Hannibal arranges everything so that the distressed brother appears to be the killer, and then they hide the body.

Abigail is further traumatised – even for a girl who shoots innocent deer, watching your father kill your mother and then cut your throat, finding your best friend’s body and then killing the boy whose sister was the previous victim: these are not soothing experiences. Her brain is working fine though: she realises that dear odd dad was feeding them girl meat; she finds the pillows at home are stuffed with girl hair. 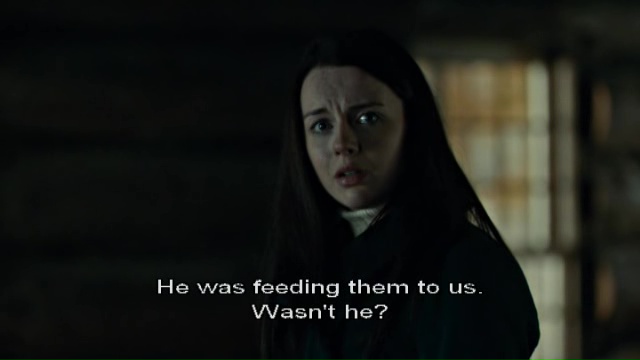 She escapes from hospital and finds herself on the top level of Hannibal’s library. He gallantly helps her off the ladder and offers to help – but only if she asks. Dracula had a similar line – he had to be invited in. 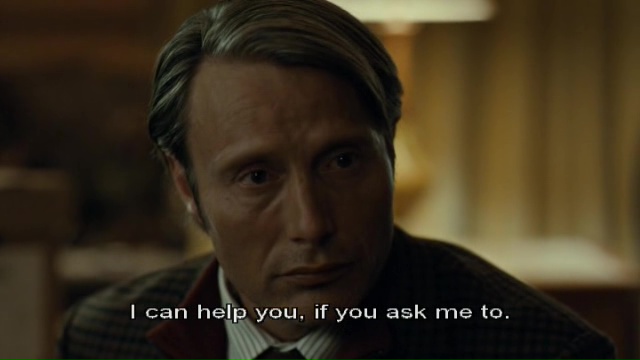 Abigail tells Hannibal she knows: Hannibal is the one who called to warn her Dad. And he called as a serial killer. 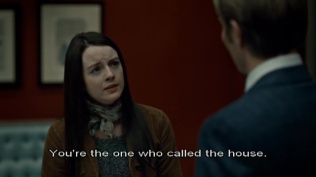 He has promised to keep her secrets; now she promises to keep his. Just as his real sister Mischa might have done – if she hadn’t been eaten.