Green Inferno (Eli Roth) is a homage to Italian cannibal films of the late 1970s and early ’80s “cannibal boom”, particularly Cannibal Holocaust (1980), which featured a film-within-a-film called, you guessed it, The Green Inferno. The film follows a group of activists who are forced to fight for survival when they are captured by a cannibal tribe. This is a standard trope of the Italian cannibal films, although Roth tries to inject a few twists to bring it up to the 21st century (they are trying to save the tribe).

The protagonist is Justine (Chilean actress Lorenza Izzo, at that time soon to be, and since then divorced, wife of Eli Roth). She plays a college freshman, who is a rebel without a cause. As the film opens, she is involved in a hunger strike to win health insurance for campus janitors. She escalates to outrage over female genital mutilation when she attends a lecture on the practice, and rushes off to lobby her father, who is a UN lawyer.

The trouble starts when Jonah (Aaron Burns) invites her to a meeting of an activist group led by Alejandro (Ariel Levy). The group plans a trip to the Amazon rainforest to stop a big corporation from illegally logging the forest and exterminating the ancient native tribes who live there; their goal is to film the logging crews with cell phones and stream footage, to raise public awareness.

The operation is funded by a drug dealer named Carlos, who flies them into Peru in a small plane. They arrive in the Amazon and head to a logging site where they begin their protest, chaining themselves to bulldozers while filming the loggers cutting down trees. A private militia arrives, and the protest receives viral attention on the internet when Justine is nearly shot by one of the militia officers. The group is arrested, but Carlos pays the police to let them go.

In a scene reminiscent of Alive!, the plane crashes into the forest; OK, they are bouncing through trees instead of snow, but like Alive! wings are falling off, people are falling out of the back of the plane, etc. The survivors search for a GPS phone to call for help, but then the cannibals arrive, painted blood red. The group are shot with tranquiliser darts and taken to a small village where they are imprisoned in a bamboo cage. 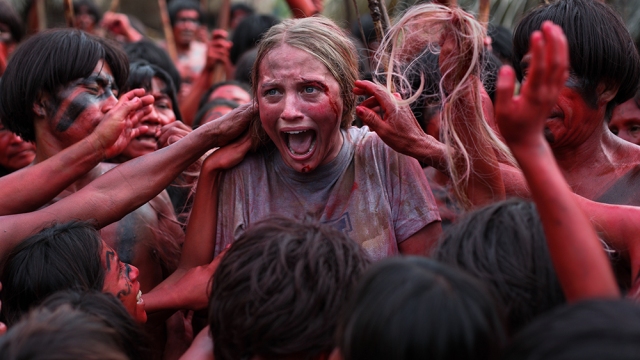 The female elder of the cannibal tribe dismembers and decapitates Jonah, in graphic detail, starting with his eyeballs and tongue. 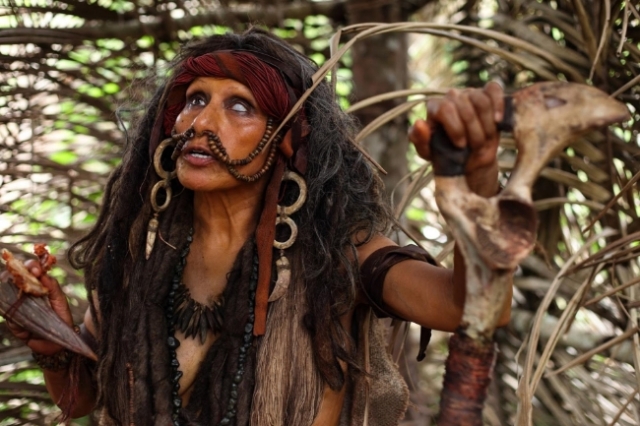 Tongues traditionally get a beating in cannibal movies, maybe because they represent the human ability to communicate with language, and so are ideal targets for those whose prime directive is not the survival of civilisation. Man From Deep River had a similar scene. Hannibal serves tongue to his friends in episode six of the first season of the television series, and Cordell promises to do the same to Hannibal in Season 3 episode seven:

I’ll boil it, slice it very thin, marinate it in olive oil, garlic, parsley and vinegar.

And of course, Clarice is warned about the time Hannibal ate a nurse’s tongue in Silence of the Lambs.

Here’s the twist: Alejandro had cynically staged the protest to benefit a rival company, and the eventual deforestation of the area is inevitable. If they can survive until the next lot of bulldozers arrive they might be saved – and because they cooked Jonah first, the village may not need to eat any more of them for a while (he’s a big lad).

OK, no more spoilers – if you like gratuitous gore, go watch the movie. Suffice it to say that female genital mutilation manages to get back into the plot, and people get eaten – one alive, another by ants. Not sure which is worse.

Green Inferno was filmed on location in Chile, the Peruvian Amazon and New York City.

But to make it feel really authentic, Roth decided to cast the Callanayacu tribe from Peru as the main “stars”. Nearly every person (except the Americans) in the movie is an actual member of the tribe that Roth discovered in the Amazon. A remote, self-sustaining farming (definitely not cannibal) community with no electricity or running water, the Callanayacu had little contact with the outside world beyond the occasional supply boat.

While Roth had found the perfect cast, he soon found that most of the tribe had no concept of what a movie was, and had never seen one. So Roth brought a generator and a TV and made them watch the 1980 grindhouse film, Cannibal Holocaust.

“We had to explain to them conceptually what a movie was, and showed them Cannibal Holocaust — and they thought it was the funniest thing that they had ever seen” Roth said in an interview.

Roth says the decision to film in the Peruvian jungle paid off.

“The footage looks so spectacular. It’s something you couldn’t get anywhere else in the world. We went farther than any cameras had ever gone before. They call the river gorge ‘Pongo de Aguirre’ because Werner Herzog’s Aguirre, The Wrath of God was the last film to shoot there. But we went deeper, to a point where there was nothing but river and jungle. It was an incredible experience.”

Roth’s movies are all tributes to the great horror classics. Green Inferno does not try to say much new – it puts a bunch of (mostly) white people in a jungle full of primitive irrational cannibals, out of their depth, and makes them face their worst fears – the key trope of cannibal films. Probably the majority of cannibal movies do that, including Road to Zanzibar. The twist here is that the cannibals are not the bad guys – they are doing what Roth imagines primitive people did all the time (he is certainly wrong there).

The people he is condemning are of course the venal corporations, but also the sanctimonious “social justice warriors” as he calls them:

“the film is really about people getting caught up in causes they don’t know anything about and doing it for vanity reasons more than for the cause itself.”

But Roth is not doing much for the locals either, showing them as brutal and merciless killers, and Survivor International said the group was “disturbed” by the depiction of the tribe, explaining, “These stories have created a racist view of uncontacted and isolated groups.” Amazon Watch and AIDESEP voiced similar concerns.

The film took a hammering by the critics. Variety said:

“A project that boasts all the appeal (and aroma) of a carcass rotting in the rainforest.”

Rotten Tomatoes critics gave it a measly 36%, with the audience rating below even that.

Stephen King, on the other hand, who knows a bit about horror, tweeted that the film is:

“like a glorious throwback to the drive-in movies of my youth: bloody, gripping, hard to watch, but you can’t look away.”

Climati had no intention of making a sequel to Deodato’s Cannibal Holocaust, and the title was used by distributors of the film to cash in on the success and notoriety of the earlier film. In 2002, British distributor VIPCO released Natura Contro on VHS and DVD as Cannibal Holocaust II, the film’s best known name. Not much cannibalism in it though.

IF YOU HAVE ANY QUESTIONS OR COMMENTS, YOU CAN USE THE TAG, OR EMAIL ME  ON CANNIBALSTUDIES@GMAIL.COM.