The Last Man on Earth was a four-season American post-apocalyptic comedy series that showed on Fox from 2015-17. The protagonist (Will Forte, who also created the series) is Phil (or Tandy as everyone calls him – long story). Phil believes he is the only survivor of a mysterious virus (not coronavirus, but hard not to think about it while watching) that has killed off humanity and most other animals. He travels around the USA leaving signs on billboards asking other survivors to contact him in Tucson, but gradually goes crazy from loneliness.

Then he starts meeting other humans. As it’s a comedy, they are (nearly) all nice, friendly, peaceable people, who bicker but generally don’t bite. Until season 4, when he meets Karl (Fred Armisen), a serial-killer cannibal. In a flashback to before the virus, Karl is being socially inept, disgusting his dinner date with recollections of a boil he had just had lanced.

The art of cannibalism stories is to disgust the viewer. Otherwise, where’s the conflict?

Karl’s modus operandi is to invite his prospective victim in for a sitting where he paints their portrait (a skill in which he is almost as deficient as his romantic conversation), then reach for his

When his model goes looking for a refreshing drink in the fridge, Karl has to run.

He flees to Mexico and sets up the same artistic practice, but is soon arrested and sent to a maximum-security prison, where he starts painting the other inmates, with designs to convert them into his next meal.

Karl is also somehow immune to the virus, but has been unable to escape the prison in which he was confined for the four years after everyone else died. Karl has killed the only other virus survivor, a guard, and is wearing his uniform, to hide his status as prisoner/cannibal. Karl is nice too. Except for being a serial killer cannibal. 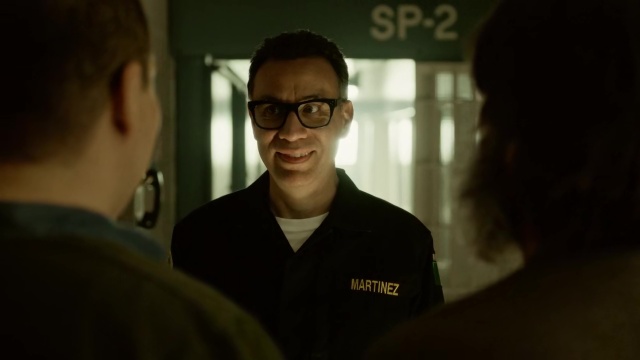 Karl has an unexplained compulsion to eat human flesh, and is powerless to defy it, despite his desperate efforts to do so. 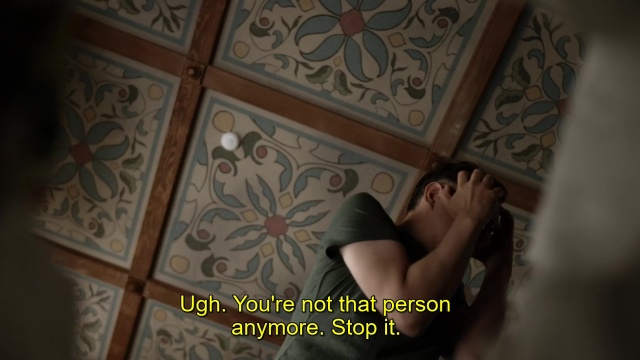 He is obsessively drawn to a used Band-Aid, which is stained with the flesh of a burnt finger.

He is unmasked when he is followed to a cemetery, where he hopes to satiate his longings with some well-rotted corpse-flesh, much to the disgust of the observers.

What makes a cannibal? We have looked in this blog at several motivations such as savageism, starvation, revenge, psychopathy and entrepreneurship, and particularly at the figure of the wendigo, the mythical Algonquin spirit that inhabits the lost and drives them to an ever-escalating hunger for human flesh. Bryan Fuller implies in Hannibal that the good doctor Lecter is such a spirit, appearing as a figure with antlers, often disturbingly dressed in suit and tie. Traditionally, the cannibal required no explanation. In Classical stories, he (and cannibals were usually male) was a super-human or else hybrid figure, monstrous in appearance and easily identified as an ‘other’. In colonial times, they were tribes of savages, whose ignorance of the morals of Europe required the intervention of the conquistadors to ensure they were re-educated, which would usually involve the appropriation of their lands and the enslavement or extermination of the ‘cannibals’.

The contemporary cannibal is often typified by his inconspicuousness – acquaintances of cannibals like Jeffrey Dahmer, Albert Fish or Armin Meiwes often spoke of how normal and prosaic they seemed. Karl fits exactly into this model of the contemporary cannibal – the others like him, and can hardly believe it, even when he admits to his addiction, as if it was an AA meeting. 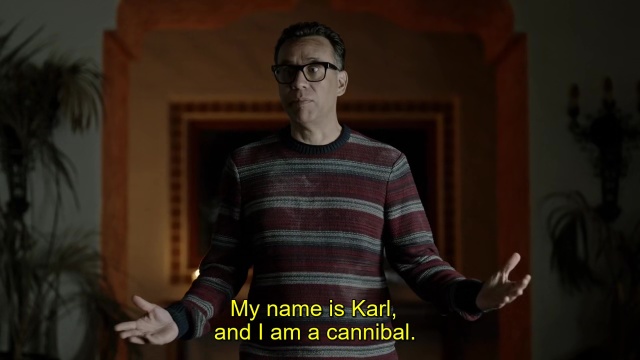 There are many ethical issues raised in this apparently light-hearted comedy. Everything in the world before the virus was about voracious appetite and power, and things have not changed that much. Now of course there is no money, and the stores are full of whatever you could want, but it’s all starting to go bad, even the tins. The few animals they have found alive have usually come to a sticky end – the cow whose milk they took died, her calf was left behind when they left for Mexico, the bull was killed and eaten. They found crickets and ate them. They catch a fish with a hook, much to their surprise. Phil threatens to eat a little dog’s butt at one point. Anthropocentrism, sometimes called speciesism or human narcissism, is now the supreme ideology, even though it has apparently led to the extermination of almost all life on Earth.

The main question of this brave new world, then, is: are there any ethical constants? The survivors are mostly besotted with the idea of having babies and repopulating the world with humans: is that a great idea? And while they are satisfied to smash down shop doors and take whatever they need, they are shocked at the cannibal doing the same. To Karl, to all of us, morality is simply relative to his immediate needs. Certainly not a view confined to cannibals.

As Dostoevsky said in the Brothers Karamazov:

“…there was no law of nature that man should love mankind, and that, if there had been any love on earth hitherto, it was not owing to a natural law, but simply because men have believed in immortality…. if you were to destroy in mankind the belief in immortality, not only love but every living force maintaining the life of the world would at once be dried up. Moreover, nothing then would be immoral, everything would be lawful. even cannibalism.”