The movie starts at St. John’s Orphanage in Washington in 1882. A young Albert Fish and other children are being beaten, to drive out their sins.

Fast forward to Albert Fish (Patrick Bauchau) as an adult. He remembers, in a voiceover, a horse that some older boys at the orphanage set on fire; how the horse galloped off, trying to get away from the fire, but of course taking the fire with him. Fish compares himself to that horse.

“The fire chases you, and catches you, and then it’s in your blood. After that, it’s the fire that has control, not the man.
Blame the fire of passion for what Albert H. Fish has done.”

Scott Flynn’s debut film is not just a very well made and pretty creepy thriller / horror movie, it is an accurate retelling of the story of Albert H. Fish, who killed several children in the 1920s, and ate parts of their bodies.

Fish never got over the beatings at the orphanage, and is seen in the film whipping himself with a belt, interspersed with images of himself in the orphanage, watched by a pale boy – his younger self. That’s not the least of it: an X-ray found dozens of needles he had inserted into his groin for further punishment. In a sense, he punished himself in advance for sins he felt he was driven to commit.

The film is structured around a film noir-style narration by Detective Will King (Jack Conley), of the NY Missing Persons Bureau.

Fish kills a boy scout, who is found by the other scouts hanging from a tree, his calf removed. 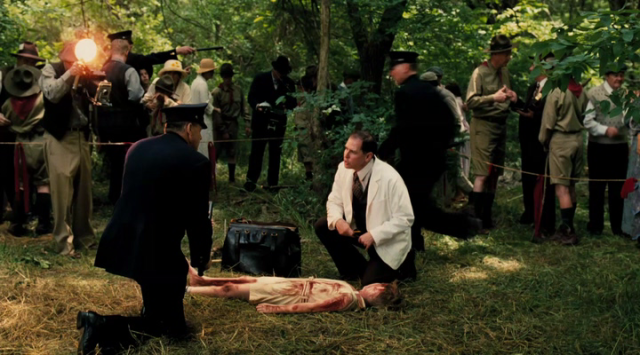 Then comes the famous case: Fish sees a newspaper ad from a young man, Edward Budd (Eric Parker), who is looking for work, but when he visits the Budd family home, he is smitten by young Grace (Lexi Ainsworth), Edward’s ten year old sister, whom he stares at throughout the interview. No one seems to find this creepy, and when Fish comes back to pick up Edward and his friend, he suggests that Grace accompany him to his niece’s birthday party at Columbus and 135th – when he returns her, he says, he’ll pick up the boys. The mother (Jillian Armenante) has qualms, as well she might, but the father urges her to let Grace go. So, they have lunch. The father says “Let’s eat – I’m starved.” Fish replies: “Me too.” But it’s not for what the Budd’s are putting on their table.

Of course, there is no party, no niece, no such street as 135th Street, and no return for Grace. When they get off the train, Grace dives back into the carriage to retrieve a package Fish has forgotten. She thinks it’s a present for the niece; it’s actually a bone saw that he bought earlier. Grace is picking flowers when Fish calls her into the creepy old house, purportedly to hide for the surprise party; the door slams shut. Fade to next scene. Fish is eating raw meat.

Detective King searches for Grace Budd for six years, despite the department closing the case and the public forgetting about young Grace. Fish hasn’t forgotten though, and when he finds a stationery package in his room while chasing a cockroach, he writes to Grace’s mother, a break which finally allows Will to track down and arrest Fish. In the letter, Fish describes the crime in graphic detail, but modestly added that Grace had died a virgin – I guess he thought Mrs Budd would find that comforting. The movie gradually has Fish read the parts of the letter regarding the killing, chopping up and eating of Grace, although it omits the earlier section which told of his friend who returned from China in 1894, where:

The letter is quoted in full, with its dodgy grammar, in Wikipedia.

Fish said that this story had given him the idea:

“He told me so often how good human flesh was I made up my mind to taste it.”

In the trial, a psychiatrist with a suitably Germanic accent testifies that Fish told him that:

“What I did must have been right, or an angel would have stopped me, just as the angel stopped Abraham in the Bible.”

Genesis 22 has a lot to answer for.

Fish is found guilty, despite the psychiatrist’s evidence of his insanity, and put to death in the electric chair. The pale boy follows him down the corridor to the execution room.

The true number of Fish’s victims will never be known. He claimed to have “had children in every state” but whether he was referring to rape, murder or cannibalism, or just bragging, cannot be established. Fish was finally caught because he killed and ate Grace Budd, a white girl: he admitted that he mostly chose children who were mentally handicapped or African-American as his victims, explaining that he assumed the police would not look too hard for them. The fact that it took six years to catch him, and that this film does not even mention them, would seem to prove him right.

The DVD cover shows Albert and Grace heading for the deserted house where she will be killed and eaten. The tag line is interesting: “a real life Hannibal Lecter”‘ would eat anyone who compared him to Albert Fish.

The full movie is not easy to find. There is a copy on Youtube, but it is not great quality.

IF YOU HAVE ANY QUESTIONS OR COMMENTS, YOU CAN USE THE TAG, OR EMAIL ME  ON CANNIBALSTUDIES@GMAIL.COM.