The fifth episode of the first season of Hannibal is called “Coquilles” which is the shellfish dish at a grand French banquet. Consider the nature of a shellfish – soft and vulnerable inside, yet presenting a hard, almost impenetrable surface to the world. Know any humans like that?

Things go on inside us that no one can know. That’s the theme of this episode. 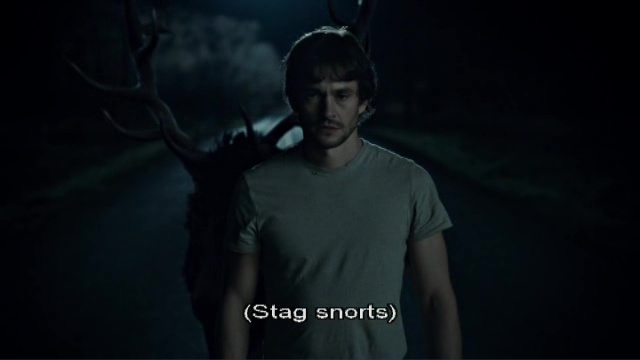 Will Graham is walking barefoot in the middle of a highway, closely followed by a stag, and we are starting to realise that things are going on inside Will as well, things even he cannot understand. This stag is a fascinating piece of symbolism, and there are numerous pages and some fiery debates on the Internet about what he represents, or even what he is called: Stagman and Ravenstag are commonly used, but there are others too. Bryan Fuller calls him a Wendigo. Throughout the series, he comes in various shapes: the stag with raven feathers, or sometimes a man with stag antlers and apparently charred skin.

The Wendigo (sometimes Wetigo) is a figure from North American Algonquin folklore. He is a mythical figure – giant, fierce and cannibalistic. He gathers strength from feeding on human flesh, but the flesh makes him grow larger, and so his appetite can never be satisfied. The Wendigo is able to return from death unless destroyed by fire, and some stories say that his bite will infect the victim and turn him into a Wendigo too.

In the show, this figure often stands in for Hannibal as Will struggles to understand that his friend is the Chesapeake Ripper, and Will is surprised to find a statue of a stag in Hannibal’s office. But, more generally, the giant form of the stag represents the animal inside each of us, the incongruity of our belief that we somehow transcend our animal selves, while in fact our basic instincts and appetites continue to drive us. Welcome to the Wendigo syndrome, a voracious appetite, which made the Native Americans believe that the white man was afflicted with a Wendigo disease when they saw him steal their lands and slaughter their people.

Anyway, the police pick up Will, and the stag walking behind him turns out to be his favourite mutt, Winston. They take him home and, next morning, Hannibal has some significant remarks on Will’s fragile state and Jack’s manipulative practices, and the way Jack got Will back on the job.

The creepy dude, called “the angel-maker” who is the one-episode antagonist for this one has a special power – he can see demonic people. Where we see a nice couple going to their room in a motel, he looks up from his ice bucket and sees a couple of demons with burning skulls.

These sort of delusions never end well, and in this case, their holiday ends with them on their knees, hands clasped in prayer, and the skin of their backs flayed and suspended from the ceiling. They have been turned into angels, praying for the crazy dude who, the team figures out, has a brain tumour and is terrified of dying in his sleep. Turns out his victims are not quite as innocent as we think either. Seems angel-maker really can sense bad dudes. He’s doing, Will tells us, God’s work. He’s making angels out of demons.

Meanwhile, Jack and his wife Bella are having dinner at Hannibal’s table, and Hannibal’s keen sense of smell tells him what Jack hasn’t figured out yet: Bella is also dying of cancer. Jack just thinks she is having an affair.

Hannibal serves a delicacy – “a masterpiece foie gras au torchon with a late harvest of vidal sauce with dried and fresh figs”. Bella declines the course, due to the well-known cruelty involved in producing foie gras. This leads to a fascinating conversation about the nature of the human/animal binary and the human predilection toward cruelty.

Jack: that doesn’t apply in the kitchen.

Hannibal: I have no taste for animal cruelty. Which is why I employ an ethical butcher.

Bella: be kind to animals and then eat them?

Hannibal: I’m afraid I insist on it. No need for unnecessary suffering. Human emotions are a gift from our animal ancestors. Cruelty is a gift humanity has given itself.

For the next course, Hannibal serves roasted pork shank.

Later, Bella comes to consult Hannibal as her psychiatrist. She is unwilling to tell Jack about her fatal diagnosis, because he has enough to worry about. Or because she is having enough trouble working out her own response to death, and has no desire to deal with how Jack will respond. Hannibal gives her a look – is it a kind of empathy?

Meanwhile, Hannibal is still working on Will, turning him against Jack. Just as the angel-maker has feelings of abandonment, so Will might feel abandoned by Jack – Jack has abandoned him “in the way gods abandon their creation”. Hannibal wants Will to change creative deities, become Hannibal’s protege. It’s working too: Will tells Jack off and is forced to apologise when Jack barks “I didn’t hear that! Did I?” (a line from the book Red Dragon, although not spoken by Jack in that text).

They track down the angel-maker’s wife, who explains how she withdrew from him and ended up leaving him as the cancer progresses. A rather dark light bulb goes on for Jack.

Will is getting worse – the headaches, the sleep walking, and the hallucinations. Just as the angel-maker has a brain tumour and Bella has lung cancer, Will also has hidden things going on: beneath the hard surface of his coquille he has encephalitis. Hannibal, with his unerring sense of smell, knows it immediately, but he is not going to tell anyone about it. He is going to use it, to draw Will towards his becoming.

This is his design.