Man From Deep River, otherwise known as Deep River Savages, Sacrifice and (originally) Il paese del sesso selvaggio (English: The Country of Savage Sex), is a 1972 Italian cannibal film directed by Umberto Lenzi. Largely overlooked in the world of cannibal studies (with some justification), it is best remembered for starting the “cannibal boom” of Italian exploitation cinema that filled our big screens with blood and body parts in the late 1970s and early 1980s.

Lenzi was probably trying to imitate the content of the notorious Mondo cinema, which had gained grindhouse popularity after Mondo Cane (Jacopetti and Cavara) in 1962. Mondo films tended to focus on exotic customs and locations, graphic violence, and animal cruelty, often presented as fact. Man from Deep River turned this into a fictional formula. 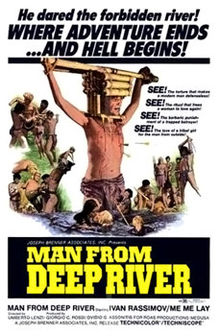 The film was inspired by A Man Called Horse (Silverstein, 1970), which also featured a white man who is incorporated into a tribe that originally held him captive. Horse had the advantage of a big star: Richard Harris, who went on to be King Arthur, Marcus Aurelius and Albert Dumbledore (in the first two Harry Potter movies), as well as having a brief but glorious singing career with one huge hit: Macarthur Park. This is all totally irrelevant to this blog, which is about cannibal movies, but you should watch the clip of the Jimmy Webb song Macarthur Park, which has little or nothing to do with anything, even the song, but helps explain why Baby Boomers are, well, the way we are.

In Man From Deep River (see? back on track already!) British wildlife photographer John Bradley (Ivan Rassimov) kills a man after a boxing match in Bangkok (as if to say “we can be savages too!”) and heads into the rain forest, with his camera. Naturally, he is captured by a native tribe. Bundled in a net, he is and carried to their village, where they tell the chief that they have caught a large fish-man. After a bit of xenophobic torture and witnessing a couple of murders of members of a rival tribe of – yes – cannibals (the tongue scene is hard to forget), John attracts the attention of Marayå (Me Me Lai), the beautiful and naked daughter of the chief, who convinces her father that John is not a fish-man, just a hu-man. Dad agrees to release Bradley, as Marayå’s slave. Could be worse.

There’s an escape attempt, and then the chance to join the tribe through a trial by ordeal – but of course, the cannibals are still next door, as they must be to qualify this film for this blog. Things get sticky. And red. 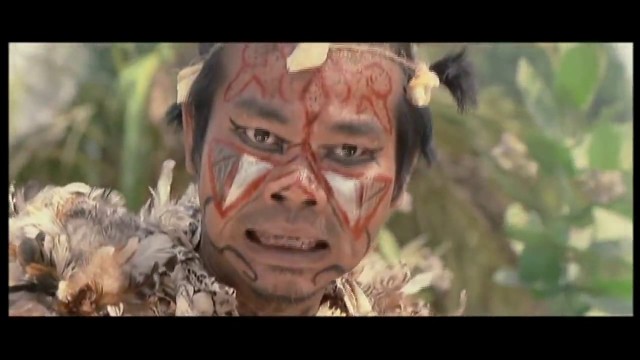 Cannibalism is certainly featured in the film, but director Umberto Lenzi stated that cannibalism was not intended to be the central theme, and the “cannibal boom” did not really start until Ruggero Deodato released his film Last Cannibal World in 1977 (we’ll get to it eventually). Nevertheless, Man from Deep River is seen as either the inspiration or the start of the cannibal boom, as its combination of the rain forest setting and onscreen cannibalism was a revolutionary innovation (Tarzan movies never dared). Lenzi was asked to direct Last Cannibal World, but the producers chose Ruggero Deodato (Cannibal Holocaust, 1980) when Lenzi’s price was too steep. Lenzi didn’t miss the boom, though, making Eaten Alive! (1980) and his most famous work, Cannibal Ferox (1981).

Man from Deep River also set the standard for scenes of extreme violence and carnage, including on-screen killing of animals, which rightly incited the wrath of censorship authorities around the world. It is a simplistic although surprisingly sympathetic look at the clash of modern and ‘savage’ cultures, mixed with a rather touching love story. It is elegantly filmed, although Lenzi’s obvious affection for twiddling his zoom lens can get a bit nauseating. But most of all, Man from Deep River set the pace for the cannibal exploitation movies that came after it: the white man, lost and bound, finding that his pretensions of superiority just don’t stand up to the scrutiny of the jungle.

If you like my blog, please recommend it (with discretion) to friends on social media.