Polite cannibal films are careful not to show teeth sinking into flesh. But it’s a bit odd to have a cannibal film, especially one involving “Hannibal The Cannibal”, which doesn’t even mention the subject of cannibalism!

Hannibal Lecter first appeared in print in 1981 in Thomas Harris’ novel Red Dragon. Incredibly (in hindsight), there was a five year gap before Robert Mann directed Manhunter, a corker of a movie – and the very first Hannibal film. Mann altered both the title of the story and Hannibal’s surname, for no particularly good reason – it seems there may have been some doubt over the copyright to the name, although the plot was almost identical to the book. There have been suggestions in interviews that, because Bruce Lee was churning out Dragon movies at the time, producer Dino De Laurentiis was worried that people would think “Red Dragon” was just another Kung Fu movie. 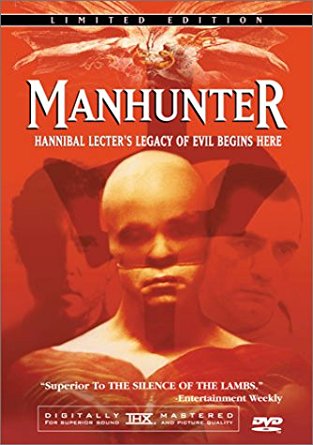 The Director, Michael Mann, was named 28 on Total Film’s list of “the 100 Greatest Directors Ever”. Before he got the gig, David Lynch was considered for the job, but reportedly rejected the role after finding the story to be “violent and completely degenerate”. Quite a judgement call from the man who made Eraserhead, Blue Velvet and Twin Peaks!

Brian Cox plays Hannibal Lecktor (as it is spelt in the credits). It’s a masterful performance, but “Lecktor” is a minor character who is a foil for the protagonist, Will Graham (played by a young William Petersen, later the star of CSI), rather than a menacing and cannibalistic presence. In fact, Hannibal does not appear until 23 minutes into the film, and then there is no mention of his gustatory predilections. This Hannibal is a simple monster, a serial killer, and is played by Brian Cox as a rendering of the Scottish serial killer Peter Manuel. As Cox says in an interview, “Real evil is something that is so scarily normal”. The back story is that Will was the first to recognise that Hannibal was the serial killer that the FBI was seeking. The book Red Dragon, if not so much this film version, is the fertile soil from which sprouted most of Bryan Fuller’s TV series Hannibal. Also, of course, the Anthony Hopkins version of Red Dragon in 2002, which was a bit jarring, in that Hannibal had visibly aged, despite it being supposedly a  prequel to Silence of the Lambs.

I’ll get to that one. As Hannibal likes to say: “All good things to those who wait”.

So, Cox’s Hannibal is normal, urbane, brilliant and uncomplicatedly “evil”. This approach makes sense: Hannibal can understand the Tooth Fairy (the psychotic killer who is the actual villain of the film – Hannibal is in a cell the entire film). The Tooth Fairy believes he is becoming a higher form of life. He writes to Hannibal:

“You alone can understand what I am becoming. You alone know the people I use to help me in these things are only elements undergoing change to fuel the radiance of what I am Becoming. Just as the source of light is burning.”

Hannibal, in his lonely cell, enjoys collecting articles about disasters, particularly those in which churches collapse and kill worshippers. He deduces from this, as he tells Will, that killing must feel good to God:

“It feels good, Will, because God has power. And if one does what God does enough times, one will become as God is.”

Hannibal believes in a maleficent god, one who enjoys the power of killing. So does he, and so does the Tooth Fairy. Hannibal offers to help Will find the TF, but only because he seeks revenge – he finds out Will’s home address, and passes it on to the TF with instructions to “kill them all”. These are not simple projects when you’re in solitary in a high security mental asylum. He is not just brilliant (and evil) but very resourceful.

John Lithgow, Mandy Patinkin, Brian Dennehy and even the director William Friedkin were considered for the part of Hannibal, but Brian Cox got the part, and played it brilliantly. He has on numerous occasions denied feeling cheated that Anthony Hopkins got the sequel (and the Oscar) in Silence of the Lambs. Well, he’s either telling the truth or a very great actor (he’s both).

Hannibal’s main scene is below:

Cox did express an opinion that, after Silence of the Lambs, Hannibal had “lost his mystery”. You may have seen Cox not that long ago as General Kutuzov in the BBC production of War and Peace, or as Churchill, in the movie of the same name. 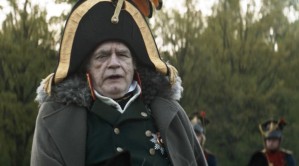 In 1986, the idea of some sort of homoerotic relationship between Hannibal and Will was pretty much unthinkable – that had to wait for Bryan Fuller’s masterful television prequel Hannibal some quarter of a century later. Nonetheless, Will Graham gets the best line in this film. As Lecktor waxes lyrical about the way Will has managed to get a journalist killed during the investigation, Will blurts out:

“I’m sick of you crazy sons of bitches!”

But the rest of us are not, Will. We enjoy cannibals, even if they are as modest about their eating habits as Hannibal Lecktor. They remind us that we are not gods, but edible animals.

If you have any questions or comments, you can use the tag, or email me  on cannibalstudies@gmail.com