Aficionados of Hannibal will remember that the good Doctor Lecter was introduced to the world in the book Red Dragon in 1981. That book became the first Hannibal movie Manhunter in 1986 with Brian Cox as Hannibal, and was then remade under its original title with Anthony Hopkins in 2002, years after he had made Hannibal (in)famous in The Silence of the Lambs. A lot of the characters, plots and dialogues of Red Dragon were used by Bryan Fuller in making the television series Hannibal, but the main plot, Will Graham trying to track down the serial killer Francis Dolarhyde, only comes to the television screen in this, the eighth episode of the final season. The rest is all prequel.

We’re not going to get an origin story for Hannibal here, except – he ate his sister, but he didn’t kill her. That’s all we get, and it’s all we need. We get one right at the start of this episode, though, for Francis Dolarhyde (Richard Armitage, who also played Thorin Oakenshield, the Dwarf Prince in The Hobbit). Dolarhyde is slightly disfigured – a cleft palate that has been repaired but is still visible, and gives him problems with his speech, and a major case of social anxiety. He sits alone, OK, he’s a loner (sometimes called “rugged individual”), and he reads Time Magazine, OK, he’s a loser. No wait – there’s an article on the cover about William Blake and his extraordinary 1805-10 watercolours of the “Great Red Dragon”. He heads off to his gym to work on some already pretty beefy musculature. He gets a huge tattoo of the Dragon. He gets some dentures made, snaggly-toothed ones. It’s a cannibal show – so people are going to get bitten. He’s going to become that Dragon, or more accurately, the Dragon is going to become him. On the full moon, he sacrifices to the Dragon, by murdering “perfect” American families. As Frederick Chilton puts it in a visit to Hannibal:

The press call him the “Tooth Fairy” because he likes to bite his victims.  We see him dripping blood into the snow. It’s all super-gothic.

Three years after his surrender, Hannibal is locked in an asylum – at least, his body is, but his mind wanders freely through his memory palace – we see him in church listening to a young boy singing Hallelujah, while in fact he is being processed and incarcerated. Then he’s talking to Alana, in his office, drinking Montrachet, but really he’s in his painfully white cell in the asylum, and she is his jailer. He has been spared the death sentence everyone expected after his trial for the murder of a dozen people.

Hannibal and Alana were friends, lovers at one point. He asks her if she still prefers beer to wine. 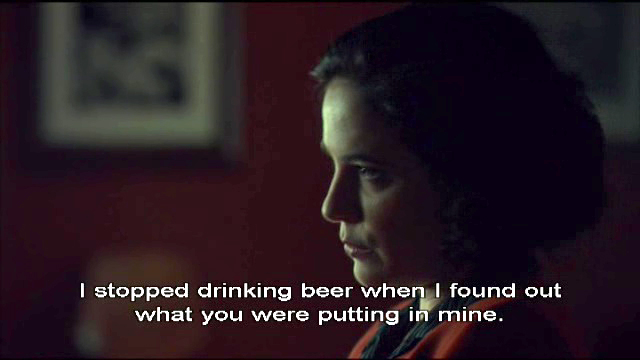 Hannibal is the trickster. Not what, “who” he corrects her. She had people in her beer.

Will doesn’t want anything to do with the FBI or, apparently, Hannibal; he is living a peaceful life with Molly and Walter (her son).

But Jack Crawford comes looking for him. No one can profile serial killers like Will. Will he go with Jack? He reads a letter from Hannibal, with a cutting about the Tooth Fairy, warning him that Jack will come knocking, and cautioning him not to accept.

“We have all found new lives. But our old lives hover in the shadows. Soon enough Jack will come knocking. I would encourage you as a friend not to step back through the door that he holds open.”

Will goes though, and visits the crime scenes, where he recreates the crime in his mind, with the swinging pendula, just the way he did in the first season, that we all miss so much.

Will figures that he (as serial killer) would take his gloves off to touch his victims. The team is thus able to get a partial thumb-print from the victim’s eyeball. And then there’s a piece of cheese that he bit. And the victim that he bit. They have his (or his denture’s) toothprints.

Dolarhyde is assailed by roars and high pitched tones as he tries to watch his home movies of his murders. Where are they coming from? Ah yes, the false teeth. Dolarhyde is being taken over by the Dragon, becoming the Dragon. He is, to his own tortured psyche, becoming more than human, an Übermensch like Hannibal. He will need to absorb the essence of Hannibal to become the superman. Will has to do the same to identify and stop him.

There’s only one way to get into the mind of a biter.