We’ve met the Red Dragon, AKA “The Tooth Fairy”, AKA Francis Dolarhyde. We’ve seen what he does.

Will Graham has been reluctantly dragged back into the team, trying to find this new serial killer. But where’s Hannibal, and why hasn’t anyone been eaten for a while? This is a cannibal blog, after all. Well, cannibalism is about incorporation of the bodies of others, and this episode is about the way people incorporate into families, friendships or alliances. This episode is also very much a reimagining of the book that started all this, Red Dragon, and its sequels, The Silence of the Lambs and Hannibal. Much of the dialogue comes straight out of the Hannibal canon.

Three years after his arrest, Hannibal is locked up in a glass cage in the Baltimore Asylum for the Criminally Insane.  Will has come to see him, to ask for help catching the “Tooth Fairy” killer; he says he wants Hannibal’s ideas on how he picks his victims. But Hannibal sees right through that, and reminds Will of his earlier prognosis that they are just alike. All of us have the elements to make mercy, or murder. 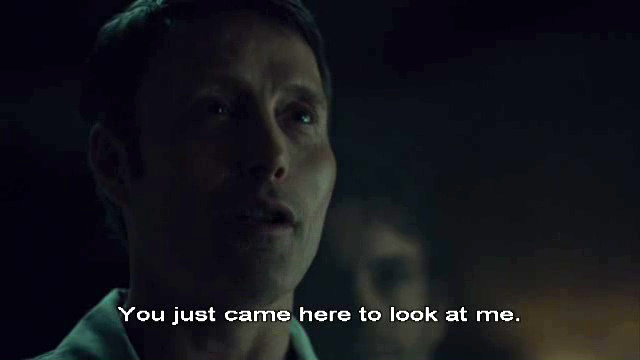 “Came to get the old scent again. Why don’t you just smell yourself?”

Alana is his jailer. She has the keys. Remember that Hannibal has promised to kill her, and he always keeps his promises.

But he agrees to help Will. Because they are family, even after Hannibal killed their “child”, Abigail, and cut Will open.

Families do terrible things sometimes, but “we still help our families when we can”. Yep, it’s all about families, and how we need them, to remain sane, to torture us, or to escape reality.

In the age of coronavirus, we are all learning the need for connection, and the pain of not being able to access it. Hannibal has a flash back to Abigail, when she asked if he was going to kill her, and now he grants us some more detail of how he faked her death, by transfusing her blood and spraying it around the room, then cutting off her ear.

Will’s superpower, of course, is imagining himself in the shoes of the killer, seeing himself committing the murder. Hannibal is happy to talk him through this. 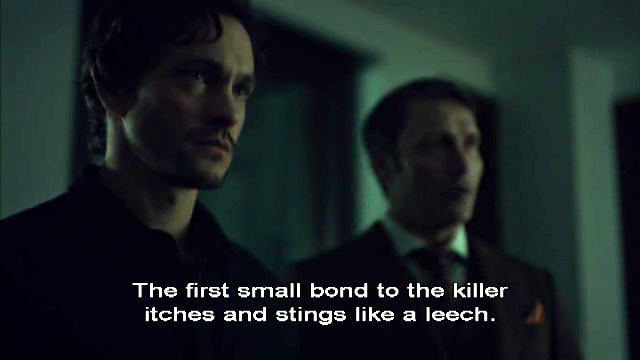 “Could you see yourself in their eyes Will? Killing them all?” 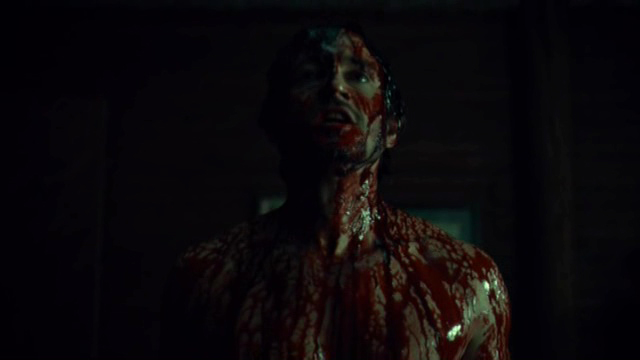 None of the families in Hannibal are terribly functional. Think of the Vergers. Think of Hannibal eating his sister! Think of Will, now with a wife and step-son, and still vainly trying to deny his love for Hannibal. Think of Alana and Margo, who have now given birth to a son, the heir to the Verger fortune, whose conception resulted from an electric shock they delivered to Mason Verger’s prostate before they killed him. Think of Reba McClane (Rutina Wesley from True Blood), who thinks she has found ‘Mr Right’ in Francis Dolarhyde, because he doesn’t pity her blindness, and she doesn’t judge his appearance (being blind helps there). 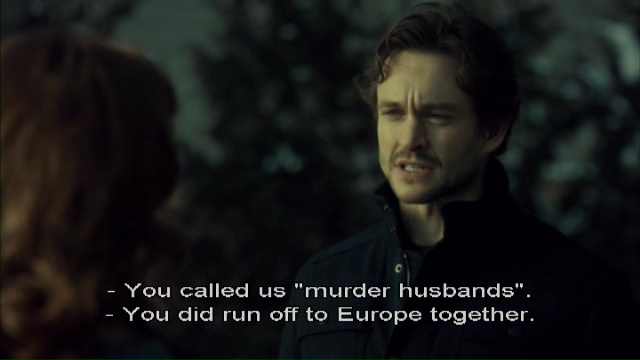 Think of Abigail’s dad killing (and respectfully eating) girls who looked like her, so he could control his desire to kill her. Hannibal has dug him up and preserved the body, so she can make peace with his corpse, using a sharp knife to pay back the unkindest cut he performed on her. Somewhat similar to the scene where Hannibal digs up Clarice’s dad in Hannibal (the book).

“We have a basic affinity for our family. We can detect each other from smell alone.”

Think of the murdered victim families, sleeping in their beds when Francis Dolarhyde killed them, broke all the mirrors in the house and stuck pieces in their eyes so they could be his audience as he raped the mother. Think of Will, coming apart as he tries to re-enact the murders. Just like Hannibal’s teacup, he will not come back together so easily.

Think of Francis as we see a flashback to him as a boy, at a table of old people with his abusive grandmother. Cuts to him now, watching movie of dead families. Think of Jack, whose wife Bella, has died; now his family is the FBI, who doubted him when he was ready to catch Hannibal. Consider Jack’s dialogue with Hannibal as he visits to discuss his use, his consumption really, of Will, in his plans to find the killer.

Who is eating whom here? Hannibal is sad that Will is cold and unforgiving, but he is also angry that Jack is cynically using Will as bait for the killer, who they know has seen Will in Freddie’s scandal-sheet.

“It would be more honest if you ate his brain right out of his skull.” 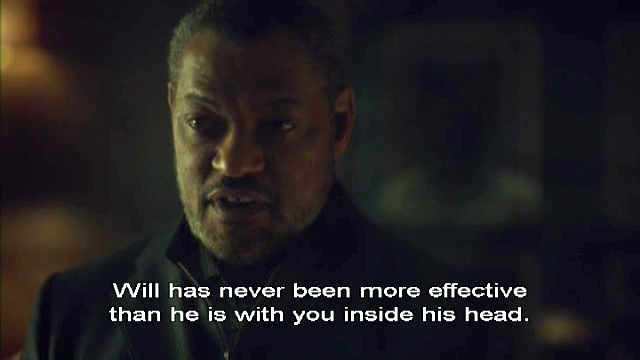 Hannibal remembers getting ready for his new family, Will and Abigail, who hunted with her father, and now agreed to hunt with Hannibal. We find out why she defenestrated Alana.

Even Francis Dolarhyde, the serial killer that the press is calling “The Tooth Fairy”, is looking for a family to understand him and help him grow. He calls Hannibal.

“The important thing is what I am becoming. I knew you alone would understand this.”

“What are you becoming?” asks Hannibal. 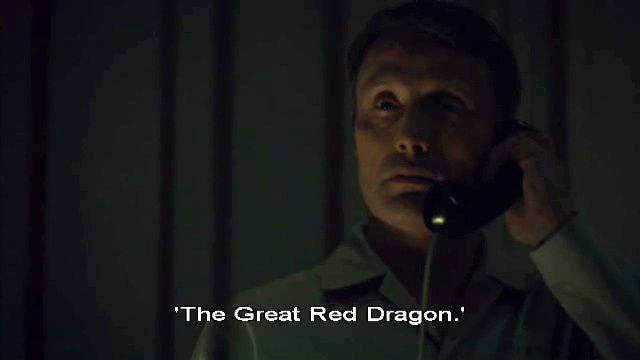 Yes, in some very twisted ways, we are all looking for family. 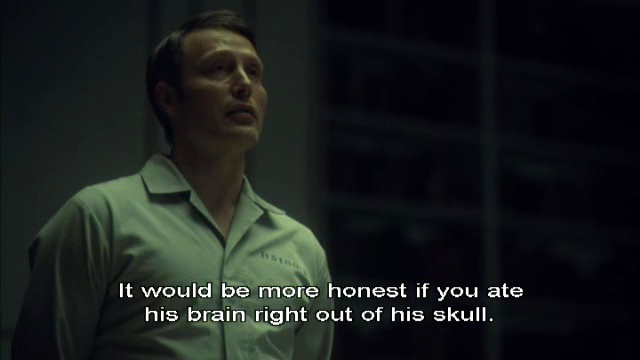