Michel Montaigne wrote, back in the sixteenth century, that savagery is not all on the side of the cannibal:

There is more barbarisme [sic] in eating men alive, than to feed upon them being dead; to mangle by tortures torment a body full of lively sense… than to roast him after he is dead”.

Peter Greenaway’s The cook, the thief, his wife and her lover (1989) is the perfect representation of the savage cannibal within our own civilisation, even though the actual act of cannibalism does not occur until the closing minutes of the film. The film however is replete with images of physical and metaphoric incorporation and abjection: eating, corpses, excrement, violence and humiliation. This is such a perfect representation of abjection that the Reelviews reviewer was “at a loss” to find anything disgusting that had been left out.

The film is almost entirely set inside the upmarket restaurant Le Hollandais which has been bought by gangster Albert Spica (Michael Gambon) who torments and humiliates the patrons, staff, his men and his wife Georgina (Helen Mirren). Crystal Bartolovich describes this process as “making everyone around him miserable in ways that depend upon the alimentary canal”. Another reviewer observed that the restaurant metaphorically presents a reversed alimentary canal: the back door with its dog-shit is the anus, the stomach is the kitchen where the food is processed and finally the dining room is the mouth, the site of cultured discrimination, but also of abuse.

While Spica eats and belches and spouts abuse and absurd bon mots, Georgina escapes, in brief interludes, to have a sexual and then a loving relationship with the very refined bookshop owner Michael (Alan Howard), with the connivance of the cook, Richard Borst (Richard Bohringer). The world of the restaurant is surreal, with each room coloured differently and the costumes of the protagonists changing to match as they move between them. Tables in the kitchen and the dining room are groaning under the bodies of dead birds and mammals. Spica shows little distinction between his three pet subjects: food, excrement and sex. The pleasures of sex and eating and the abjection of excretion are important messages from Greenaway’s film: Spica sums up “the naughty bits and the dirty bits are so close together, that it just goes to show how eating and sex are related”.

He forces an enemy to eat dog-shit, his men gorge on the fine dining and vomit on the table, and his wife reveals that sex for him involves only violence and degradation. Spica’s favoured method of torture is force feeding: he feeds excrement in the opening scene to a man who owes him money, he feeds buttons to the kitchen boy, and when he discovers the love affair, he promises to catch the lover, kill him, and eat him. He and his men kill Michael by making him eat one of his books.

Georgina persuades Borst to cook Michael’s body; in a ceremonial scene, she reverses his force-feeding tactic and at gunpoint forces him to make good his earlier threat to eat the lover, suggesting he starts with Michael’s cock: “it’s a delicacy, and you know where it’s been”.

As she kills Spica with another phallic symbol, his own gun, she hisses at him (while looking at us, the viewers) the single, final word of the film: “cannibal!”

The film’s alterity focuses on the criminal crew against polite society. It was made toward the end of the long period known as Thatcherism, in which Britain was hugely polarised between followers of “libertarianism” and their opponents who felt that money and power were crushing all vestiges of civil society. The film has widely been interpreted as a protest about the politics of that time, with the thief as Thatcher and her greedy plutocrats and the lover as the ineffectual left opposition, the cook as the civil service and the wife as the people, being alternately wooed and abused. Roger Ebert saw a more universal message about an entrepreneurial class that is raping the earth and its environment while the “timid majority” finds distraction in romance and escapism. The New York Times felt that Greenaway was asking the question: what happens when “the most crass and sadistic people” gain power? Greenaway himself said that his use of cannibalism was a metaphor of consumer society: “once we’ve stuffed the whole world into our mouths, ultimately we’ll end up eating ourselves”.

Some critics, however, sees Greenaway’s message as elitist: consumption is only an issue when the “wrong” people are doing it. Spica and his crew debase the high culture of Le Hollandais with their ignorance, crudity and violence. Georgina (whom Spica insists on calling “Georgie” as if trying to alter her gender), Michael and Borst are refined, aesthetic and vulnerable, like the high culture which the thieves despise and aspire to at the same time. Greenaway seems to be accusing the “low culture” thieves, and his audience, of the same “voracious hunger” that colonialism cited to calumniate the natives they wanted to subdue.

Greenaway is exploring these “limits to appetite” in his scenes of sex, food and excrement; the contemporary cannibal demonstrates a new and uncertain relation to commodities. The cook is a film about abjection, but also desire. Cannibalism reduces the human to a roast dinner, but at the same time questions the limits we increasingly need to put on our meals, as we overconsume our share of natural resources. 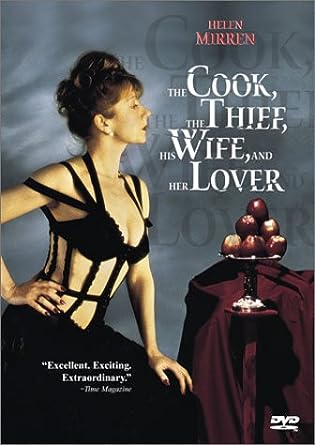 One thought on “Cannibalism and the limits to appetite: THE COOK, THE THIEF, HIS WIFE AND HER LOVER (Greenaway, 1989)”