Dexter is a television series that ran for 96 episodes from 2006-13. This episode is from the final season, and is the only one to feature a cannibal, which seems like a pretty shocking oversight really.

Dexter Morgan (Michael C. Hall, who played David Fisher in Six Feet Under) is a serial killer who also works as a blood spatter technician for the Miami metro police. There’s a lot of analysis of how he got that way (didn’t help that he saw his mother chopped up with a chainsaw when he was little) but, as he is not the cannibal in this tale, we don’t have to concern ourselves too much about that. Interesting to note, though, that although he is presented as a psychopath, he is often shown to have emotions and feelings that might not result in that diagnosis. In fact, Dexter only kills very bad people (just as Hannibal Lecter mostly only kills very rude ones) so he is really more a vigilante than a psychopath, and is motivated by a sense of justice that the Nietzschean Dr Lecter might find laughably absurd. We would have to conclude that both, however, are trying to improve the world by removing objectionable characters from its surface.

Dexter follows a suspect, Ron Galuzzo (Andrew Elvis Miller), to the mall where he sells exercise equipment. Galuzzo measures Dexter’s body/fat ratio, a wink to what we are about to find out about the dude and his culinary interests.

Dexter breaks into Galuzzo’s house and it’s a mess, except for the kitchen, which is clean and spotless. Dexter opens a crock pot and finds a finger in the stew. Dexter is horrified, because I guess serial killers are not used to seeing body parts. Or perhaps Dexter is secretly a vegan.

In the fridge, Dexter finds plastic containers containing various body parts. One of them holds a whole brain marinating in a garlic sauce.

Dexter has a killing ritual, in which the victim is bound and gagged; in this case, it takes place in Galuzzo’s kitchen.

He first lectures Galuzzo on the evils of cannibalism (bit of a nerve from someone whose hobby is slicing people up) then admits that he thinks that he and Galuzzo are alike, because

Of course, Dexter has a rather better set of knives than most cannibals.

Galuzzo is the only cannibal featured in the TV series, which is all based around the first book of an entertaining and highly amusing series of eight novels by Jeff Lindsay. A quite different case of cannibalism is featured in the fifth novel, Dexter is Delicious (2010). In the book, Dexter faces a coven of cannibals who eat (sometimes willing) victims in a Dionysian romp. 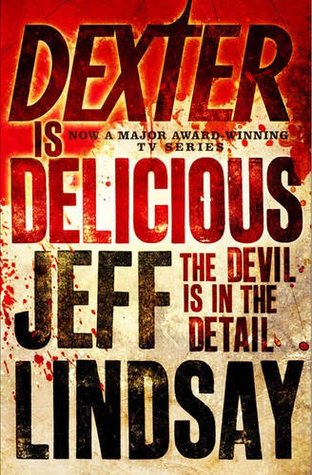 The story revolves around Dexter and his sister, Deb, trying to save a young girl who doesn’t want to be saved; she wants to be eaten. I shall leave the cannibal unnamed in this extract, so as not to be accused of spoilers.

“Some of them do. They want to be eaten – just as much as I want to eat them…. Almost makes you believe in a benevolent God, doesn’t it?”

The book (IMHO) offers a much better cannibal story than the one in this episode, and we can only wish that the television gods had adapted it instead of this rather insipid character who presents no real challenge to Dexter, beyond offending his delicate sensibilities. Maybe Legal forbade it. Fine to tie a cannibal up, abuse him and slaughter him, but to eat someone who wants to be eaten? Now there’s an ethical dilemma for our times.