As we isolate ourselves in our homes (if we have homes) and wait for the storm of contagion to whistle past outside, we can imagine, rather more easily than was the case ‘way back’ in 2019 when this film was made, what it would be like to be locked in a room with an uncertain supply of food. Would we turn to cannibalism?

Netflix have released The Platform, a Spanish film that has been widely described as “stomach churning”. You’d think a churned stomach would be the bare minimum for cannibal movies! More temptingly, an Indian website called it “Just The Film To Stay Away From During Corona”:

“This Spanish film vomits its venomous bile on a depraved civilization with graphic description of cannibalism and excretion, not in any particular order. Human beings are shown as survivalist degenerates.”

The Platform offers a metaphorical analysis of neo-liberal capitalism (but also Stalinist communism), through the lens of a prison, in which there is plenty of food, if only everyone would share! With true, deadly, neo-lib efficiency, the prisoners are not fed by the labour intensive method of guards delivering food, but by a platform that descends from the top of the building, stopping briefly at each level. The inmates at the top have their choice of the gourmet food, and those further down on each level get the left-overs. “What are we going to eat?” Asks Goreng.

Of course, the people at the top gorge, binge and horde, occasionally defecating and spitting on those below, and those at the bottom starve or turn to cannibalism. Así es la vida.

Goreng (it’s a pun – the Indonesian/Malay word for fried food) is played by Iván Massagué, who finds himself in a prison cell with Trimagasi (another Malay pun, meaning “thank you”), Zorion Eguileor. They become friends, for a while, motivated by their shared misfortunes, and then are driven apart by the same thing.

The people at the top get first pick of the superb feasts prepared by a team of chefs, while at the bottom of the platform are the homeless, sleeping rough, hopefully 1.5 metres apart. 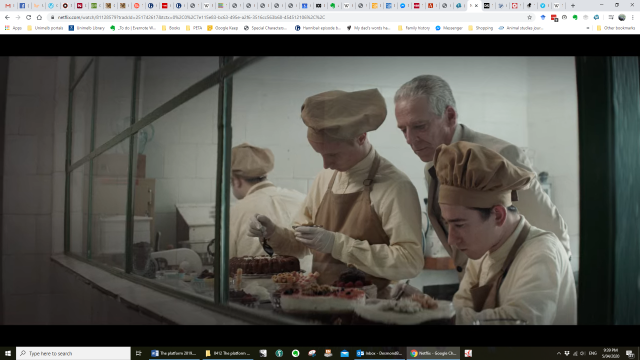 By the time the platform gets to the bottom levels, there is not a scrap of food. Trimagasi has spent a month down there. He tells Goreng about it. “I didn’t say I didn’t eat anything…”

Those on the middle levels hope to find some sustenance in the trickle-down from those above them, who in turn consider them barely human.

Goreng is there for six months to earn a college degree, while Trimagasi is in for manslaughter. His crime was getting mad at the ads and throwing his TV out the window, where it killed an illegal immigrant who was passing by. “He shouldn’t have even been there!” Trimagasi cries. Both actors are best known for playing comedic roles, and there is a surprising amount of humour found in what is otherwise quite a bleak story.

The woman who processed Goreng turns up in his cell, and tells him the prison is a “vertical self-management centre”, an experiment in “spontaneous solidarity”. But it turns out to be closer to a social experiment about weakness, and irresistible hunger, reminiscent of Mason Verger putting two dogs who were friends in a cage with no food, to see who would eat whom. 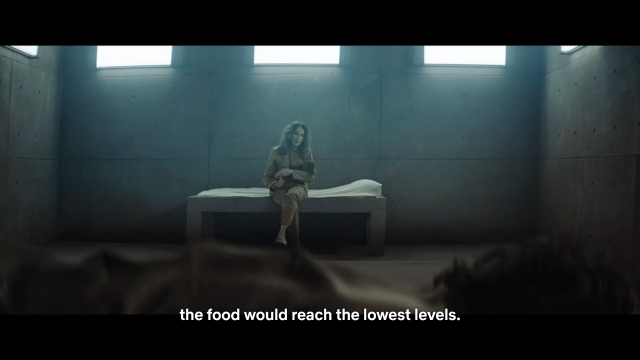 Interest is cannibalism grows apace. A recent article stated that cannibal stories typically emerge at times of social unrest and uncertainty. 2019 and the first quarter of 2020 presented us with plenty of evidence of that, with a plethora of cannibal movies released or in production, including:

Look, I’m not going to tell you what happens in The Platform or discuss the rather ambiguous ending (you can google all sorts of explanations, including one from the Director). It would be too easy to drop spoilers, and you really should see this one – it’s a corker, and it’s available on Netflix, so if you have that, watch it while we all stay home isolated or in quarantine. Then turn on the news and watch people fighting for toilet paper.

The battle cry of humans when they fear scarcity: 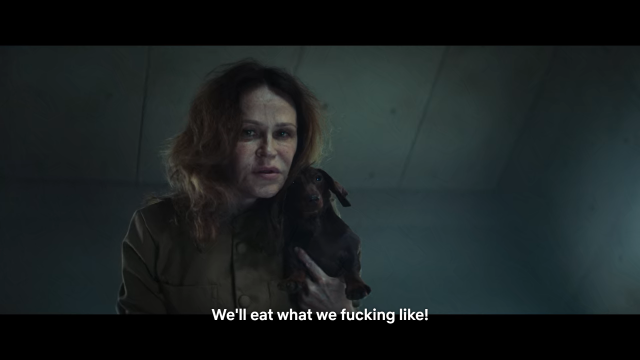 This film is the perfect metaphor of the fear and greed displayed by those hoarding during the pandemic:

If you can handle gruesome hack-n-slash and cannibalism, I recommend watching the movie The Platform on Netflix. It provides a much-needed metaphor for what we're going through with hoarding/stockpiling during the pandemic. And emphasizes that "change rarely happens sporadically"

Goreng is haunted by the words of Jesus as he descends to the lowest level:

“If you drink not of the flesh of the Son of Man, nor drink of his blood, ye have no life…. For my flesh is meat indeed, and my blood is drink indeed. He that eateth my flesh and drinketh my blood dwelleth in me, and I in him.”

This is our new reality – cannibalism. The coronavirus is showing us the limits to growth. Voracious appetite, incapable of sharing or even consideration of others, can only lead to one place. When the good times roll past, our flesh is meat indeed.

The film premiered at the 2019 Toronto International Film Festival, where it won the People’s Choice Award for Midnight Madness. It was released on Netflix on March 20, 2020.