Fritz Lang considered this film to be his magnum opus. It regularly appears on lists of the best movies ever made, it was voted the best German film of all time by the Association of German Cinémathèques, and it is one of the few movies with 100% on the website Rotten Tomatoes. It set the standard by which police procedurals and serial killer stories would be judged for the next century. But is it a cannibal movie?

The story starts with a group of small children standing in a circle, and a little girl, Elsie, is choosing who is eliminated from the game, using a song:

“Soon will come the man in black for you…” 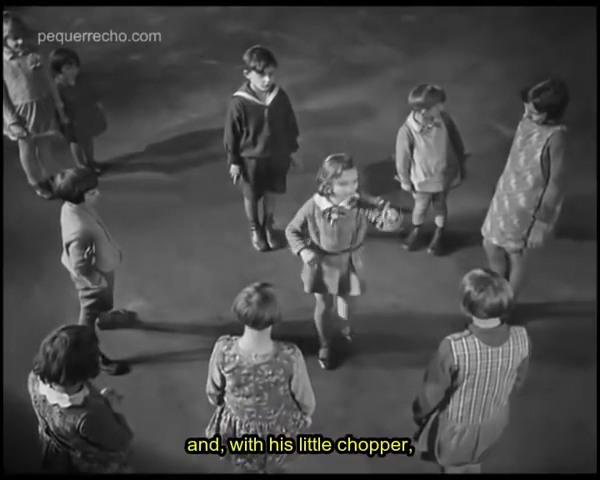 Ja, it’s a cannibal film. We don’t see anyone get eaten, but that is not unusual, particularly in the older films from the cannibal genre.

Elsie is heading home after school, bouncing her ball, past a poster seeking information about the murderer of eight children.

A nice man, Hans Beckert (Peter Lorre in his first major film role), compliments her colourful ball and offers to buy her a balloon. He is whistling Grieg’s “In the Hall of the Mountain King”. The music is best known for its use in Ibsen’s Peer Gynt, which is not actually a cannibal story, but does involve a lot of stuff about trolls eating people.

Soon we see the ball rolling away, the balloon floating off, briefly caught on telegraph wires.

Like most modern cannibals since Jack The Ripper, the killer is indistinguishable from the rest of the public – just a normal guy (well, as normal as Peter Lorre could ever be). 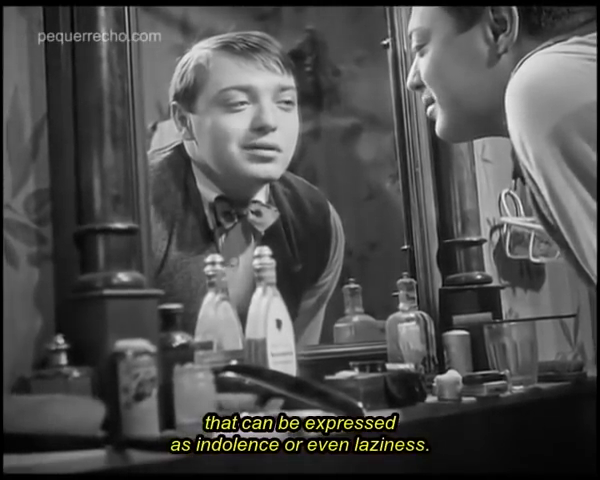 The panic over the ninth murder makes everyone a suspect, particularly after Beckert writes to the papers, boasting that he’ll keep on killing. 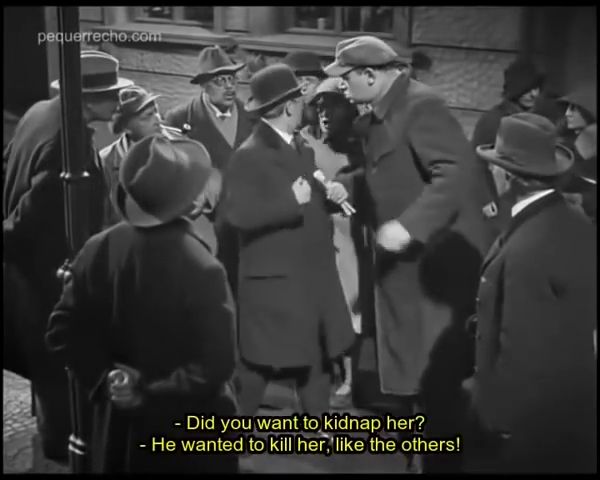 The police raid the criminal underground every night, which is terrible for business. 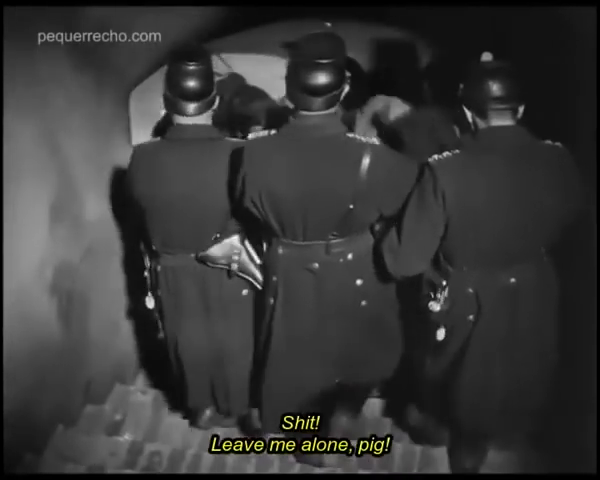 “hides a mother inside… I know many hard crooks whose eyes mist up looking at the little children playing.” 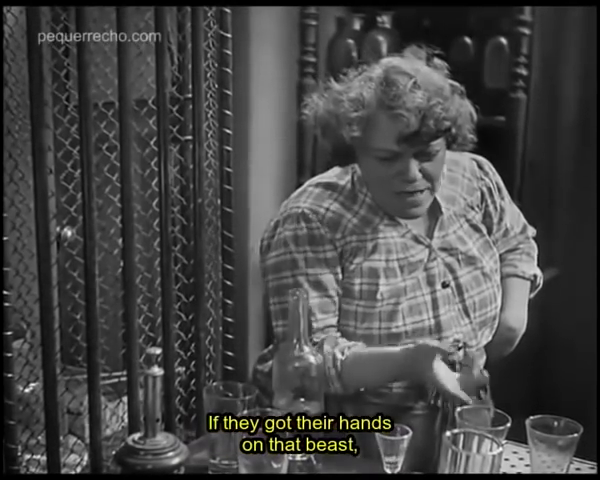 And so it goes. The coppers can’t catch him, so the underworld decides they will catch him, just so they can get back to business as usual.

The police have their own theories of why they cannot catch him:

“He’s not a real crook! Maybe he’s somebody who shows the harmless look of a good citizen who wouldn’t kill a fly.” 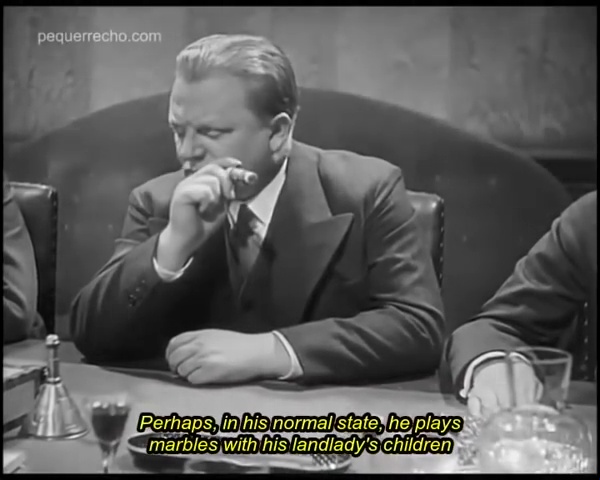 “If it wasn’t for this… apparent innocence of murderers, it would be unthinkable that a man like Grossmann* or Haarmann* could live for years next door to their neighbours, without raising any kind of suspicion”.

The police follow leads from the asylums; the crooks have other methods. Of course, everyone is a suspect, except – the beggars. The heads of the underworld offer them a reward to watch all the children of the city. Meanwhile, Beckert is watching little girls in shop window reflections. 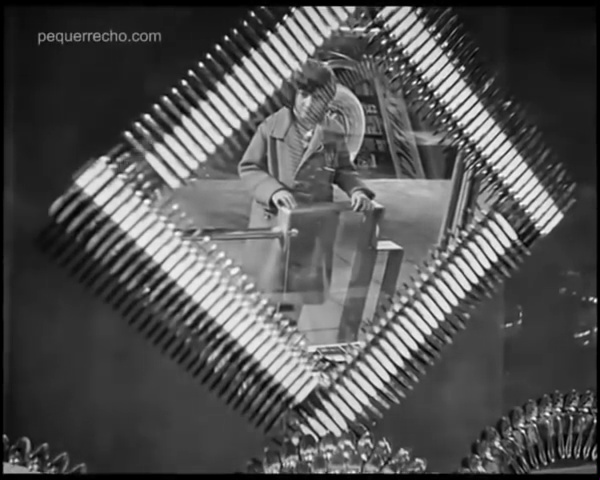 The “M” of the title is chalked onto his coat by one of the beggars, as he is taking away his next child. 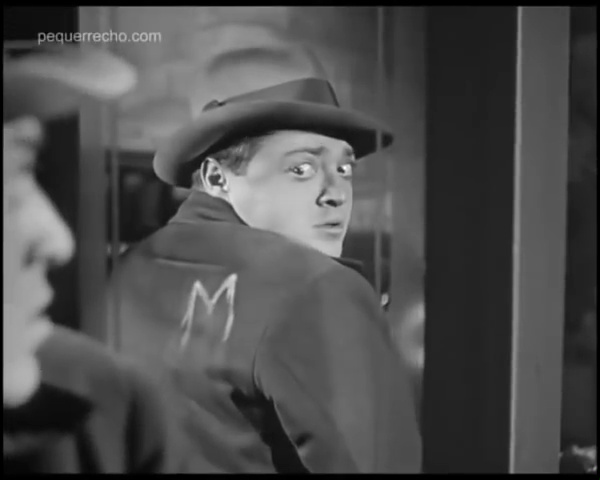 No more spoilers. Let us just say that the climax is a trial, in which Lang asks some hard questions about whether we are responsible for our actions, even when we cannot control our own minds. 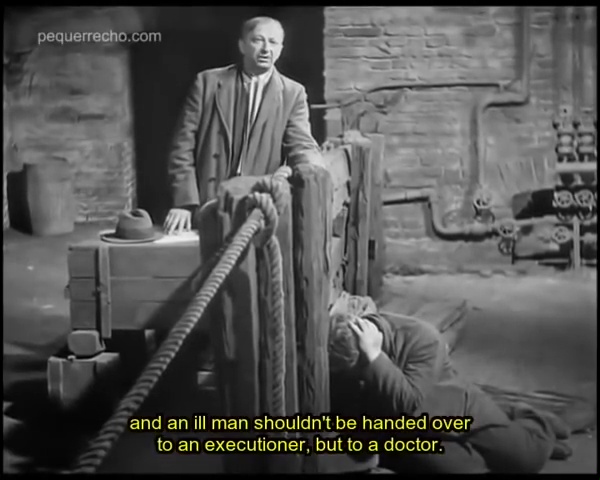 The moral of the story is presented by Elsie’s mother, sitting outside the court, who says:

“This will not bring our children back to life. People should take better care of their children!”

No mention is made of the precise fate of the victims in the movie – Lang leaves that up to our imagination, and some knowledge of German serial killers of that time. They disappeared without trace for some days and…

*   Some critics and reviewers claim that M was based on serial killer Peter Kürten—the Vampire of Düsseldorf—whose murdered at least ten people including several children in the 1920s and achieving sexual climaxes from the killings, and from drinking the blood of some of the victims. He was also keen on writing to newspapers, as is depicted in the film. Kürten was beheaded in 1931 for his crimes, so would have been very much in the news at the time of the film’s creation.

Fritz Lang, however, in an interview in 1963 with film historian Gero Gandert, denied that M was based solely on Kürten

“At the time I decided to use the subject matter of M, there were many serial killers terrorizing Germany—Haarmann, Grossmann, Kürten, Denke”

The first two are actually mentioned in the film. Fritz Haarmann, known as the “Butcher of Hanover”, killed at least 24 boys and young men between 1918 and 1924, often by biting their throats, and then allegedly eating or selling the meat from their corpses as pork or horse-meat. Carl Großmann was arrested in 1921, a suspect in up to 100 murders of women and girls, whose flesh he was suspected of selling on the black market and from a hot-dog stand in Berlin during the Great War. Karl Denke killed and sold the flesh of dozens of homeless vagrants and travellers from 1903-1924.

The fact that Lang quoted those four serial killers as his models indicate that he certainly had cannibalism in mind when creating the role presented by Peter Lorre – the serial killer who cannot control his urges.

M is highly recommended as a classic, not just of the cannibal genre, but of cinematic art.

The full movie is currently available (and with excellent quality) on Youtube: