Those of us who can get away with it are locked up at home, some of us writing blogs. Meanwhile, outside in the world, the ‘essential workers’ – doctors, nurses, check-out operators, delivery drivers, teachers and, of course, hairdressers – have never been busier. We are splitting into two groups – the enforced idle, and those with hazardous, possibly lethal jobs, upon whom we rely. That will last, we are told, until a COVID-19 vaccine arrives, but those identities are already forged and will leave their cultural fossils behind. The idle, basking in their gardens (if they have them) and the toilers, looking after them. Both, of course, share the need to eat.

In 2011, Guy Standing released a book called The Precariat: The New Dangerous Class.  It was about how a new class was being produced by neo-liberal capitalism – people whose jobs, lifestyles and sense of stability had been devastated by the imposition of the free market and globalisation. The divergence between rich and poor has never been greater, and not just in the “developed” nations. Workers everywhere are being cast down into poverty and despair, not just by their bosses, but by workers in other countries who are willing to work for a pittance. The precariat, said Standing, “are prone to listen to ugly voices, and to use their votes and money to give those voices a political platform of increasing influence”.

Neo-libs found a voice in Margaret Thatcher and Ronald Reagan, and later the Tea Party in the USA. Trump, Putin and Brexit and fascist leaders in Hungary and Brazil rode to power as those ugly voices grew, looking for a scapegoat, an “other”, to blame. The splits in our societies continue to widen, so the ugly voices, and the hunger, increase. Fritz Lang in the film Metropolis (1927) told of workers being condemned to work in the dark caverns underground while the rich enjoyed life in skyscrapers.

What do these two trends have in common? Enforced idleness, medical or economic, and frantic toil, often with disproportionately meagre rewards, often in appalling conditions. The calls to strike out against real or imagined elites. It’s taken to its logical conclusion in THE TIME MACHINE, the original 1895 book by H.G. Wells, George Pal’s 1960 film, and this 2002 DreamWorks remake, directed by Simon Wells (the great-grandson of H.G.), which takes a new look at this story of human evolution. Where exactly are we heading?

In this version, unlike the original, “the Time Traveller” has a name: Dr. Alexander Hartdegen, associate professor of applied mechanics and engineering at Columbia University. He is played by Guy Pearce, an Aussie actor whom we know from Priscilla Queen of the Desert, Memento, Jack Irish and of course Neighbours. Pearce has also appeared in a couple of cannibal films, including the lead role in Ravenous and “the Veteran” in The Road. 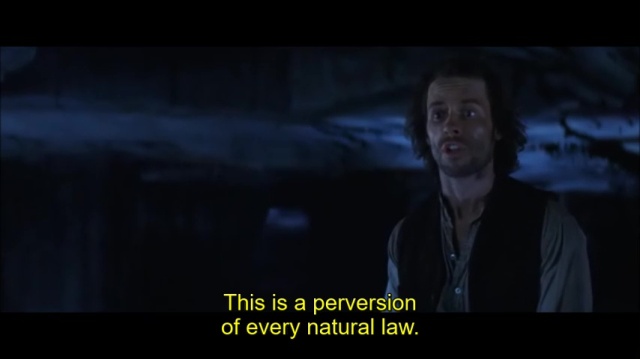 Modern movies insist on specific and personal motivations – think of Sweeney Todd, who in Tim Burton’s 2007 version was motivated by revenge for his wrongful transportation to Australia while his wife and child were abducted by the judge. In the 1936 version, however, he was just a greedy bastard who liked killing people and stealing their goods (and selling their flesh). Just so, in this 2002 Time Machine, professor Hartdegen’s fiancé is murdered in a mugging gone wrong, and he is driven to invent a time machine to see if he can go back and save her.

In the book and the 1960 movie, the humans of the future had regressed, defying the then (and still) popular concept of a “great chain of being” in which evolution inexorably means progress to ever higher forms. This ideology had become known as “social Darwinism” although the assumption of progress would have baffled Charles Darwin, who saw evolution as natural selection of those species who best fitted an environment. Darwin did not, therefore, involve subjective terms like “progress” in his theories (much). In H.G.Wells’ vision, the effete ruling classes had become the beautiful but useless Eloi, who sat in a bucolic paradise picking flowers. They were, in turn, picked off at night for dinner by the cannibalistic Morlocks, descended from the workers, who had gone underground and were now subterranean predators, spooky, but easily defeated by shining lights in their eyes (or by the ham-like fists of Rod Taylor – another Aussie who played the Time Traveller in the 1960 movie).

But the Eloi of the year 802,701 in this 2002 version are a somewhat sterner lot, building sanctuaries high in the mountains to avoid the nocturnal depredations of the Morlocks, but fatalistically accepting what would probably happen to them one dark night.

Hilariously, they have set up a shrine to the America of our time, and learn from childhood a perfect 21st century American English, taught by the film’s love interest (and damsel in distress) Mara (played by the Irish singer Samantha Mumba). 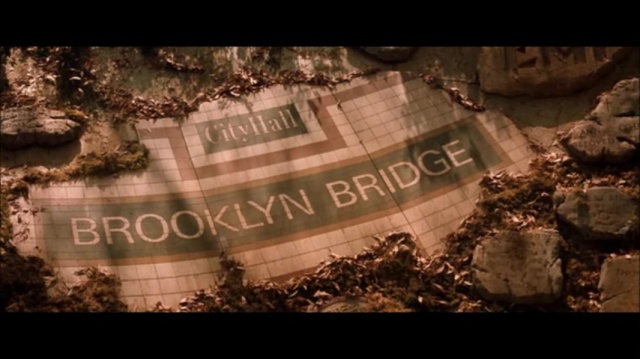 The Morlocks are a far more formidable foe too, appearing from the ground, in daylight, and capturing their prey with poisoned darts; they are immensely strong, not too smart, and hideously ugly. They are also, like the humans of the present and most other periods, voraciously hungry, and capable of eating all their supplies (roasted Eloi) at once if not controlled.

And here is the main interest in this story – the Morlocks are controlled, psychically, by an “Übermorlock” (Jeremy Irons, looking a lot like the late, great Tom Petty). 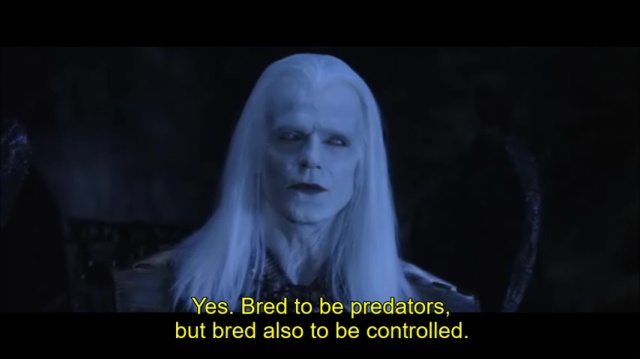 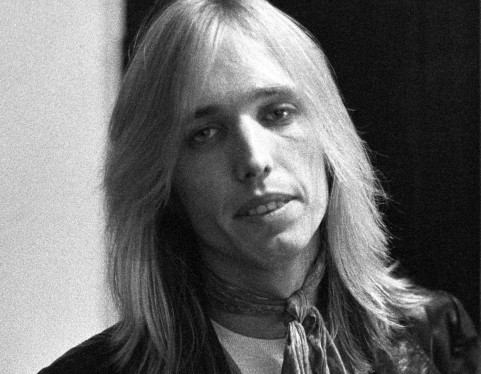 Civilisations, as this story illustrates, do not trend toward constant progress, but rise and fall in cycles, as John Gray has been trying to tell us,

“To believe in progress is to believe that, by using the new powers given to us by growing scientific knowledge, humans can free themselves from the limits that frame the lives of other animals. This is the hope of nearly everybody today, but it is groundless.”

As if to prove this point, a quick trip to the year 635,427,810 shows a burning wasteland with armies of soldiers or slaves wandering in the desolation.

At their most perilous, civilisations turn to power-hungry dictators – think Caligula, Hitler, Stalin, Mao, or the Übermorlock. They offer simplistic solutions to increasingly complex problems. Those solutions find a scapegoat, an alien group, an easy sacrifice, and death for those target populations is common, as is their consumption, if not as food, then as slaves. 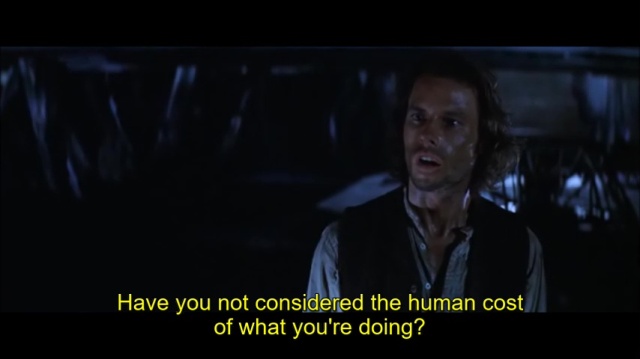 The Übermorlock explains that the underground workers and the above ground hedonists evolved into two separate species, and that within his own type, castes developed – the brutish predators and the intelligentsia, who use mind control. The Eloi are simply “livestock” and the Übermorlock is unimpressed by our hero’s attempts to impose the anti-cannibal ethics of 800,000 years ago. 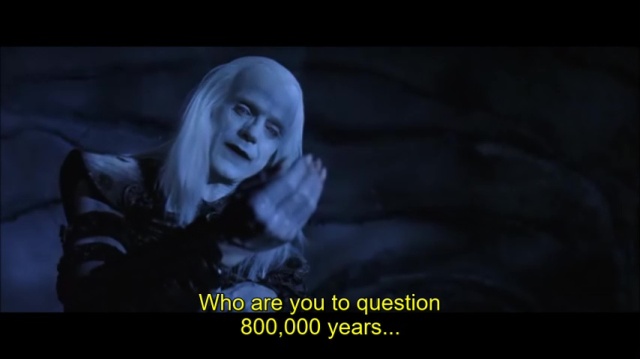 And is he wrong? Think of the COVID dialogues about letting the vulnerable old people die to allow the economy to grow.

Yes, the Morlocks, like humanoid coronaviruses, find it much easier to catch old people. The rest of the Eloi are allowed to get fat and sassy until time for slaughter – just like some seventy billion other animals we inculpably slaughter and eat every year. Hartdegen does not realise this until he falls into the Morlock waste processing system.

Are the Morlock’s evil? Perhaps by the standard of 20th century liberal humanism. In 800,000 years, or now if we choose, we may have other ideas.

“This Machine has all the razzle-dazzles of modern special effects, but the movie takes a turn for the worst when it switches from a story about lost love to a confusing action-thriller.”

Bit harsh, IMHO. The cast is good, the special effects great fun, and the reimagining of the story shows some interesting thoughts about evolution and human ethics. Entertaining and worth a look, I’d say.