I intended to dip in and out looking for highlights, but of course ended up watching the whole fascinating one hour three minutes of it. Certainly, it is worth watching the whole thing, but (from a cannibal studies POV) don’t miss the Q&A  in the last 15 minutes, when Fannibal @hannigram_trash asks

“How do you think Hannigram / Hannibal and Will would have spent their quarantine time? And it must have been a very hard time for cannibals, because – no hunting?

“It’s easy, isn’t it? You know where everybody is – they’re at home. Baking! The oven is already on!”

Then of course come the torrent of questions – will there be romance between Hannibal and Will in Season 4? @Bryanfuller says:

“From our very first meeting with Mads, he redefined the character immediately for me because he’s the devil. He is this thing both of the world and outside of the world. So for me, the devil is pansexual.”

So really, if/when Season 4 starts – anything could happen. And probably will. But give the devil his due. In Christian texts, Satan is usually a fallen angel, the enemy of heaven, intent on snaring humans into sin and taking their souls. By the time of Revelations, he is called The Great Red Dragon, the name used by the serial killer who dominates Season 3. As a New Testament Satan, the Great Red Dragon is obviously interested in absorbing the Old Testament Satan, represented by Hannibal.

The Old Testament Satan appears very sparsely, and is subservient to God. He is probably the serpent who tempts Eve (Alana? Will?), and he appears under the name Satan (הַשָּׂטָן – the accuser) in the Book of Job. What is an “accuser”? Basically, he is God’s district attorney, looking for evidence against humanity, and not usually having too much trouble finding it. Like Hannibal, and later Will, he sets up obstacles or temptations for everyone he meets, and is curious to see what will happen. In the apocryphal Book of Jubilees, God grants the satan (referred to as Mastema) authority over a group of fallen angels, or their offspring, to tempt humans to sin. Isn’t that the story of Hannibal and his patients, who he assiduously tries to convert to his ways? Consider his words in Ko No Mono:

“I have not been bothered by any considerations of deity, other than to recognise how my own modest actions pale beside those of god…. God is beyond measure in wanton malice. And matchless in his irony.”

The final question of the reunion, the one we are all waiting for, was: will we get a Season 4 of Hannibal? Bryan Fuller replied

I am very hopeful.

Hugh Dancy adds that, after five years on the lam, 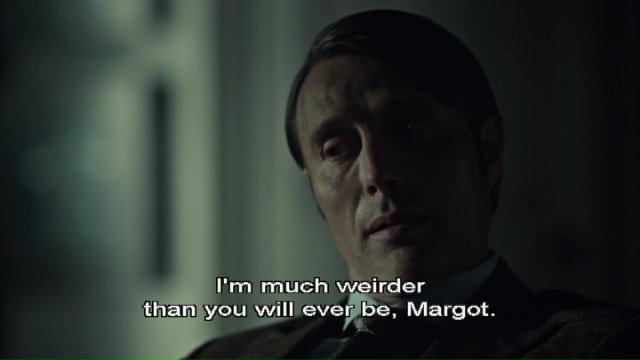