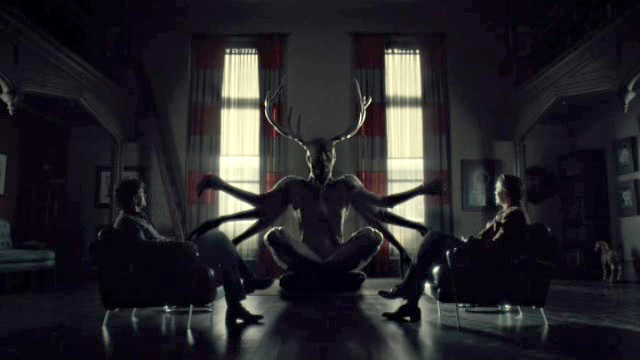 “This is my design”.

It’s Will Graham’s favourite line. But he is wrong. Everything that has happened and will happen in the build-up to the giant brawl (of which we saw a preview in episode one) is in fact Hannibal Lecter’s design. Jack and Will think they are playing him (and Will is not too sure), but he is at least a dozen steps ahead of them all the way.

This episode is all about DEATH AND REBIRTH. This is a fundamental theme in most religions: the sacrifice of the innocents, and the rebirth (Moses in the bulrushes, Jesus’ resurrection, the birth-rebirth cycle of Hinduism and Buddhism).

The episode starts with a birth. The Wendigo (stagman) is watching a creature born from the earth – tearing its way free from the birth membrane and gasping for breath. It is the birth of a new Wendigo, and it is Will Graham. It is his dream.

Then there is death, and death precedes life, because we kill to eat. For some of us it’s plant based, for others a sentient creature, slaughtered in our name. For Hannibal, it’s all of the above, and always dramatic. Last week was a baby pig, this week it’s a couple of songbirds. This scene is taken from the book Hannibal. He is serving dinner to Will. We see a bird in a glass case; we see wine being poured in. Surely not.

“Among gourmands, the ortolan bunting is considered a rare but debauched delicacy.” 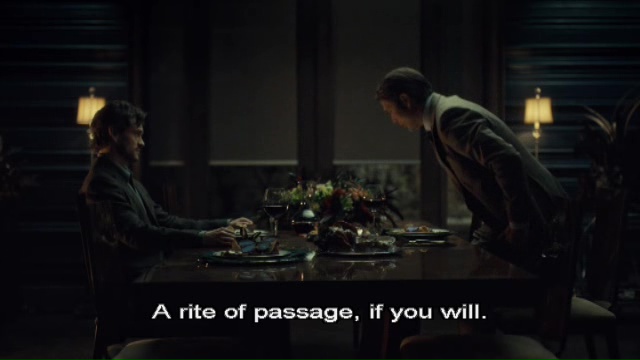 “Preparation calls for the bird to be drowned alive in Armagnac. It is then roasted and consumed whole in a single mouthful.”

Will points out that ortolans are endangered. 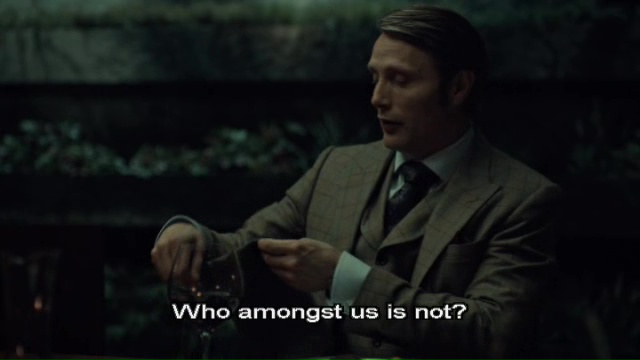 The tradition in this fearful ceremony is to wear a shroud over the diners’ heads, under which they hide from God.

Hannibal witnesses Will eat his ortolan, as do we, in extreme close-up.

Hannibal tells Will that after his first ortolan he was “euphoric”. 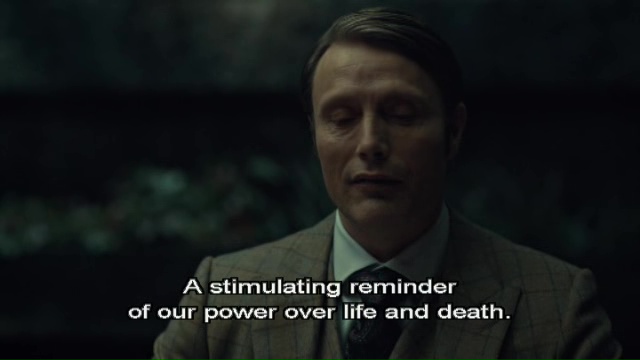 Haha! Good one Will! See you and raise you, in a high stakes game, or so we suspect, and which is confirmed to us later in the episode. Will is (or thinks he is) trapping Hannibal. Yet, as his dream portends, he is not fully in charge of this narrative, and may in fact be turning into his own version of the Wendigo, even as he pretends to be following Hannibal’s tuition, graduating to murder and cannibalism. Hannibal tells him 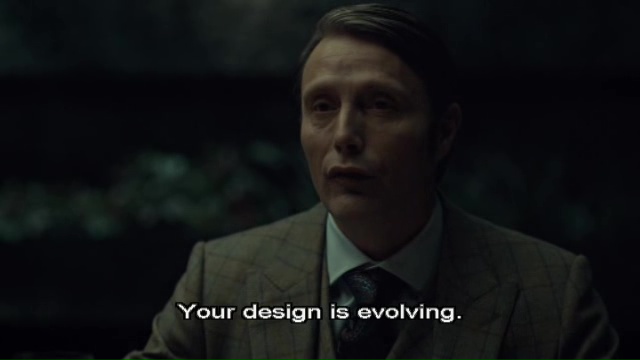 His choices are affecting the physical structure of his brain. Killing is changing the way he thinks. Then Hannibal uses some dialogue from Red Dragon, in which Hannibal is encouraging Francis Dolarhyde, (whom we don’t meet in this series, although there is some speculation that he was the killer in Season 1 Episode 1).

“You must understand that blood and breath are only elements undergoing change to fuel your radiance. Just as the source of light is burning.”

The creation of the Wendigo, or the Übermensch, is a chemical process, a “becoming” which requires the destruction, the burning, of lesser beings, just as humans like to believe that the destruction of “lower” animals is required for their continued existence (or so the Verger marketing campaigns tell them). Will can only grow into his destiny by killing and burning people. And such is the impression he hopes to give Hannibal.

In the book and films of Red Dragon, Freddy Lounds (a male reporter) is glued to Dolarhyde’s grandma’s wheelchair, set alight, and rolled into his parking garage. In this reimagination, we are led to believe that Freddie Lounds has met that fate, after the removal of some meat (her psoas muscles) for the meal Hannibal and Will enjoyed at the end of the previous episode. They continue their metaphysical conversation over her (?) charred corpse, in front of the clueless Jack Crawford. Hannibal observes that the burning was sacred. Will replies:

“Freddie Lounds had to burn. She was fuel.
Fire destroys and it creates. It is mythical.
She won’t rise from the ashes. But her killer will.”

Oh yeah. And we’re not leaving the metaphor there. It’s the circle of life, as Elton keeps reminding us. Life ends in death, death engenders new life. Nietzsche spoke of amor fati – the love of fate, the acceptance that what has happened could not have happened any other way, and will happen again, and again. Bit like Australian politics.

Yet Hannibal continues to hope that somehow his own agency can alter the cycle of eternal recurrence, reverse time and repair the loss, particularly of his sister. He is obsessed with Stephen Hawking’s description of entropy as proof of the “arrow of time” – we “know” that time only flows one way because a shattered teacup does not gather itself back together. Hannibal really likes Hawking’s early theory that, when the universe stops expanding and starts contracting, time will reverse and entropy mend itself; the teacup will mend, Mischa will be whole again, Abigail will be returned to Will. He has something of the sort already planned out, but I’m getting ahead of myself.

Apologising to Will for killing Abigail, he says:

“Occasionally I drop a teacup to shatter on the floor. On purpose. I’m not satisfied when it doesn’t gather itself up again. Someday perhaps a cup will come together.”

Meanwhile, we get to know Mason Verger, and find out why Margot hates him, Hannibal increasingly dislikes him (now he is in his therapy room) and we are going to really detest him. Mason has a cute recipe for cocktails: he likes to make children cry and add their tears to, presumably, gin and vermouth. He’s into orphans, which got him into trouble in his youth. 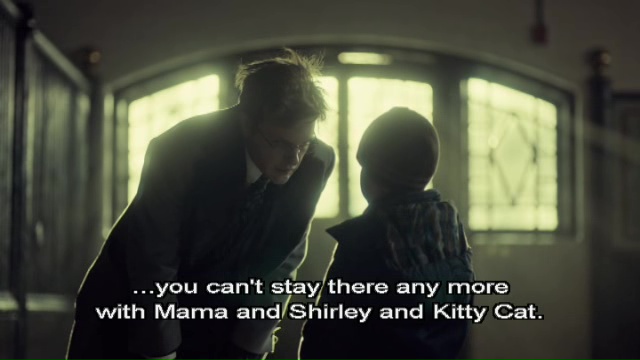 Hannibal’s therapy is never pointless. He has been treating Margot; a rather unorthodox therapy in which he encourages her to have a child so that she can inherit the Verger fortune when she kills Mason. Now he drops the hint to Mason: that she may be expecting a child. 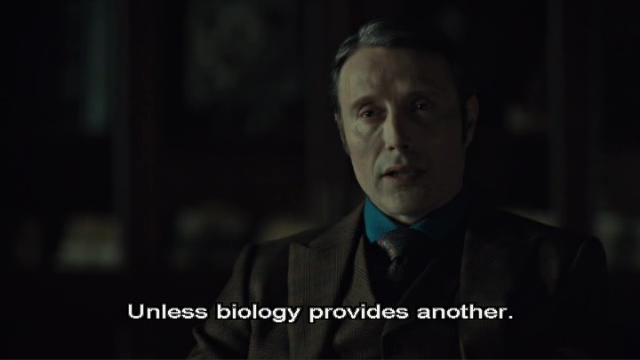 Now, in case we have somehow overlooked the birth, death, rebirth theme, someone (yeah, of course it’s Hannibal) has dug up Freddie and a few other corpses and made a Shiva effigy in the graveyard.

Shiva is known as “The Destroyer” within the Trimurti, the Hindu trinity, but he is also the God who creates, protects and transforms the universe. Hannibal sees a similar role for himself in the human universe. Not surprising that he likes the Hindu gods, because there can be many of them, and he is hoping Will, or one of his protégés, will become like him. He tells Will that every creative act has its destructive consequences. 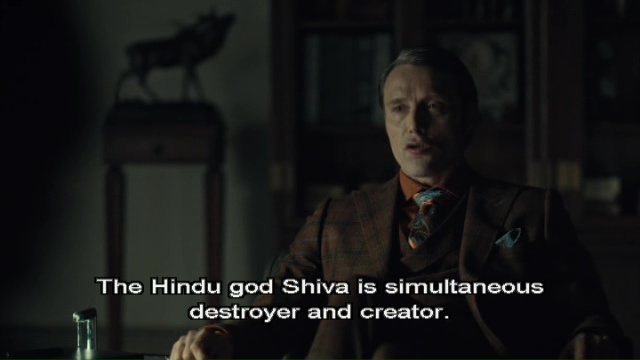 Will tells Alana that the killer of Freddie must have a benefactor, and

But Will is befuddled over Margot, and her revelation that she used him to get pregnant. Fatherhood was not was he was expecting, but he quite likes the idea. He asks Hannibal if he has ever been a father.

“I was to my sister. She was not my child, but she was my charge. She taught me so much about myself.”

Now, in the books Hannibal and Hannibal Rising, Mischa was a toddler who was torn from Hannibal’s little arms by Nazi collaborators in WWII and cooked, and Hannibal was given some of the resulting stew, which, we are supposed to swallow, turned him into a cannibal. Well, that is how you become a wendigo apparently. No such revelations in the TV series though. For one thing, this Hannibal is much younger, and was born decades after the Nazis were defeated. We don’t know how old Mischa was in this new universe, or the circumstances of her death and ingestion. Perhaps we’ll find out in Season 4:

We do know that Abigail reminded him of Mischa, which means she might have been a bit older than a toddler when eaten. So Will, who is still mighty pissed off about Hannibal killing Abigail and forcing her ear down his throat, asks

Will talks of his dreams, in which he is teaching Abigail to fish. And just to confound anyone who claims Hannibal is a psychopath, he says (and this pretty rare) 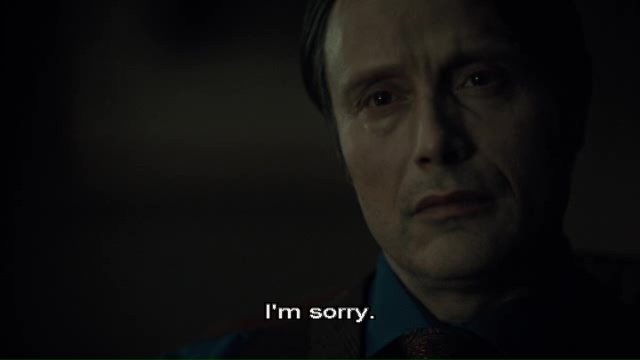 So why did you kill Abigail? Will wants to know. You sacrificed her!

Now Hannibal often quotes God, which bothers many in the audience, including, at this point, Will. What God does Hannibal pray to? Well, he doesn’t pray, we are not awfully surprised to learn. He’s just impressed by disasters, particularly church collapses. 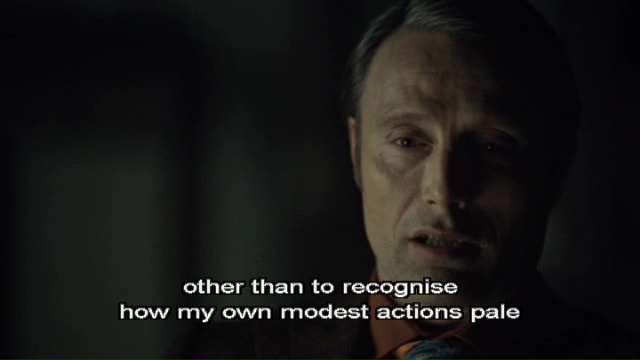 Will retorts that he prayed to see Abigail again, and Hannibal, who has a sharp wit, points out

Yes, her ear, barfed up in Will’s kitchen sink. Put up your hand (nobody’s watching) if you laughed at that line! But Hannibal has a plan, which he puts in obscure, metaphysical terms, which don’t much help the terribly practical Will:

“Should the universe contract, should time reverse and teacups come together…” 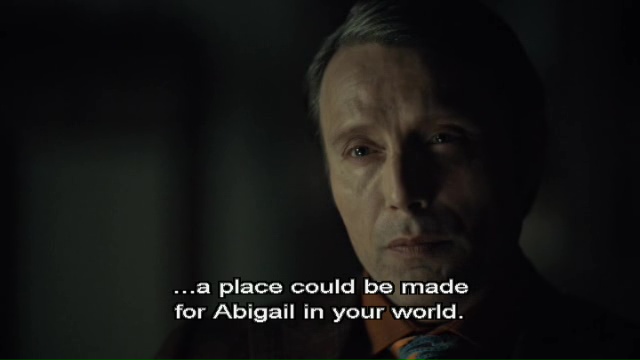 Well, he is, supposedly, going to be father to Margot’s baby.

Mason is now annoying everyone – at his farm, where he is teaching pigs to eat living humans, and in Hannibal’s rooms, where he is boasting of the way his father would stab pigs at the shows, just to see how fat they were. 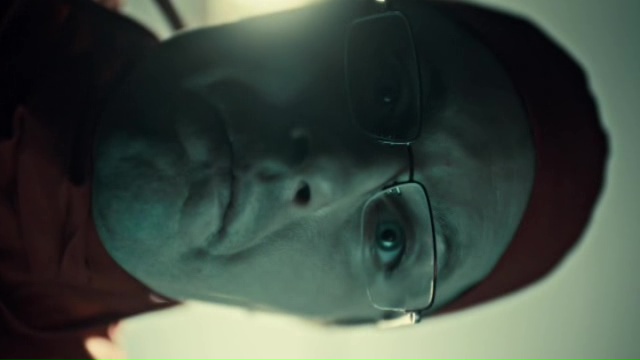 We finally find out the truth about Freddie Loundes’ murder – there wasn’t one. She’s sitting in an FBI office, part of Jack and Will’s plot to entrap Hannibal.

Will is not impressed with Mason’s mutilation of Margot, and the loss of yet another child (he’s keeping count: Abigail, 1; fetus, 2). He punches Mason in the mouth, pulls a gun on him, and tells him that all of them have been pawns in Hannibal’s game.

“Do you think it was Margot’s idea to have an heir?
You think it was your idea to take it from her?
My idea to come here and kill you?
The only thing that you, your sister and I have in common – is the same psychiatrist.”

Oh, there is a reckoning coming. In two more episodes.