The season finale of a show usually ends (or certainly should end) with a gut punch that leaves us reeling and also wanting more, counting the moments until the next season. Certainly happened at the end of Season 1, with Will suffering severe encephalitis, causing him to lose large tracts of time, framed for murder, shot by Jack Crawford, and confined in the Baltimore Asylum for the Very Very Nervous. Hannibal has put Will through the wringer, hoping that this will purify him, enable him to become an Übermensch, like Hannibal.

The becomings are not the only Nietzschean aspects of this episode. Amor fati is love of fate – the acceptance that everything that has happened will happen repeatedly. Or perhaps Hannibal’s interpretation is more along the lines of the space-time continuum – we know he likes watching Stephen Hawking’s videos – everything that has happened and will happen is fixed as it was and as it will be.

In any case, the episode begins where the series will end; an epic battle between Jack and Hannibal, and then goes back in time: 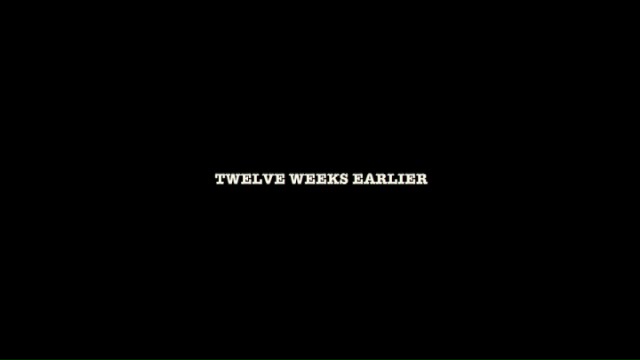 It’s just after Will’s arrest, and Jack is feeling guilty about all sorts of things. Breaking Will, which resulted, he thinks, in the murder of at least five people. And also guilty about eating the exquisite Japanese meal Hannibal has lovingly prepared: Mukozuke – seasonal sashimi, sea urchin, water clam and squid. The presentation is Kaiseki – a Japanese art form that honours the taste and aesthetic of what we eat (and is the name of this episode). It is the last meal Hannibal prepared for his aunt, Murasaki (lots more about her when we get to the final Hannibal movie, real soon now – Hannibal Rising and, who knows? Maybe Hannibal Season 4?)

Hannibal, of course, never feels guilty about eating anything. Why should he? Other humans are just “elements undergoing change to fuel his radiance” (Red Dragon p.121). We are only prawns in his game. 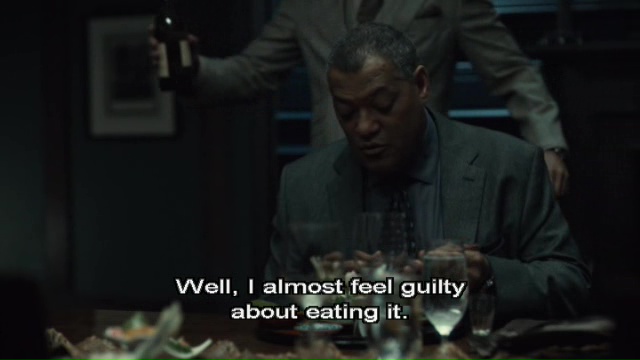 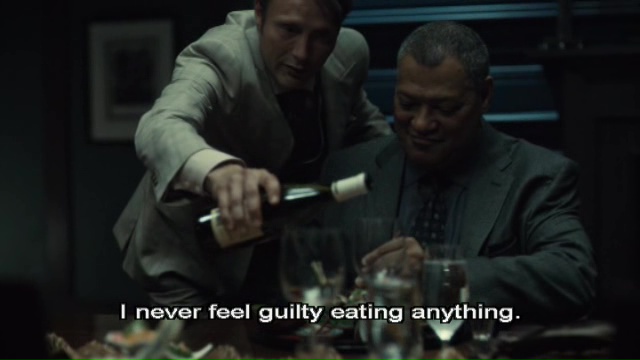 Will has accused Hannibal of being the Chesapeake Ripper (not without justification, since, well, he is) but Jack is feeling guilty about that too. Hannibal, totally confident, eases his mind: 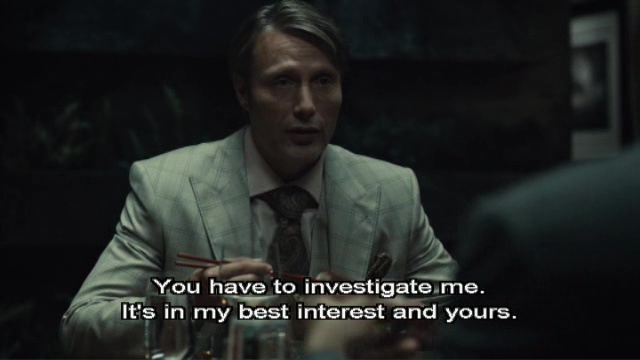 Will can project himself into his happy place – fishing in the river. But even in this vision, there is Hannibal, in the shape of the hybrid human/stag. 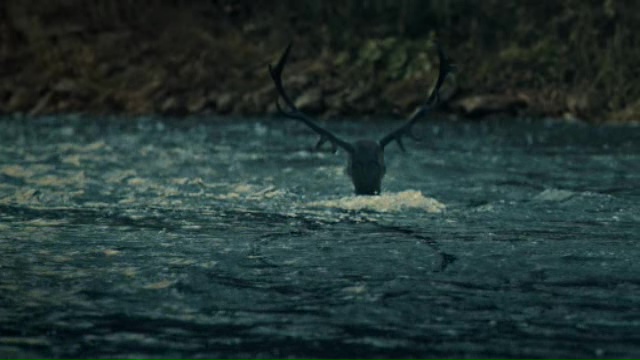 Meanwhile (as Stephen Colbert would say) Bedelia is still analysing Hannibal, which is like a mouse chasing a cat. She believes that Will is trying to manipulate Hannibal. If Hannibal agrees to visit Will, though:

Hannibal admires Will’s insight into himself: “he sees his own mentality as grotesque but useful. Like a chair of antlers. He can’t repress who he is.” 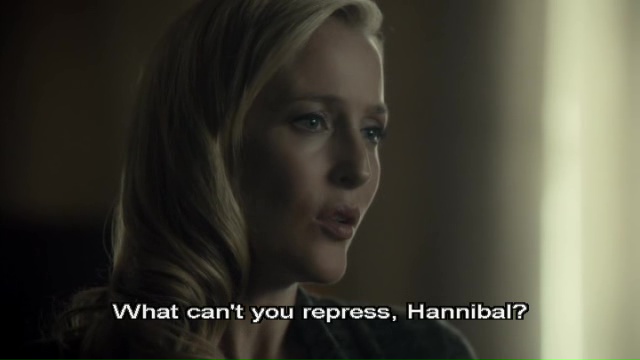 The answer? Just one of those Hannibal Mona Lisa smiles.

Will tells Hannibal he used to hear his thoughts in his own voice, but now

Hannibal just wants Will to use that voice to find himself, and what he can become. Will wants to find what thoughts Hannibal planted in his head

Hannibal gives his DNA sample, wonders when his suits will be cleared from the evidence room. Beverley tells him

Alana tries to hypnotise Will to get his memories back, but he has a vision: he is sitting at a table covered with Hannibal’s meals. Stag-man is sitting at other end. On Will’s plate – Abigail’s ear. Hannibal finds out from Chilton, who has been secretly recording the sessions (as he did to Clarice in Silence of the Lambs). Hannibal has, to his own surprise, cooked a gourmet vegetarian meal for Chilton, who is missing a kidney from last season. 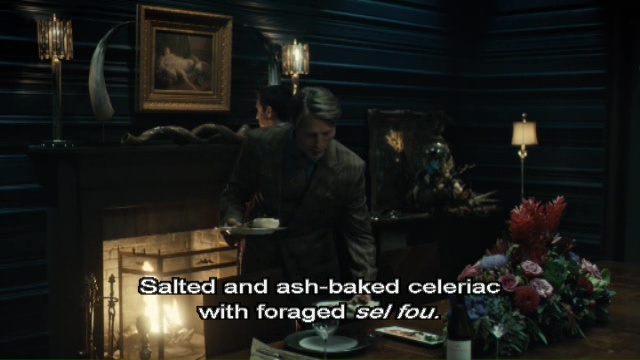 Meat is expensive. Hannibal has a very affordable source though.

Chilton tells Hannibal that he is the sole topic of Will’s conversations: 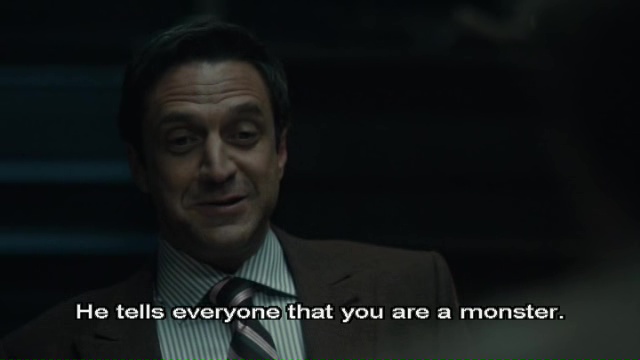 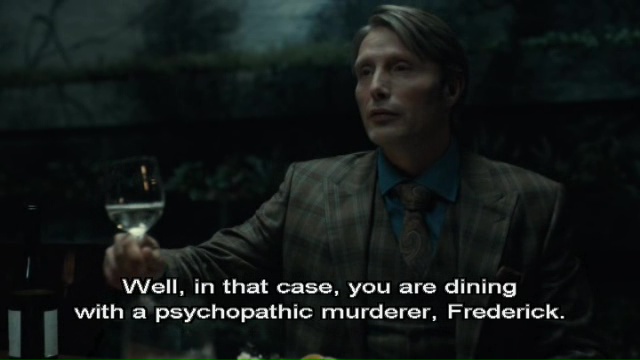 Oh, there’s also a dude who is busy killing people and sewing them together, because we always need a bigger monster – makes our own monsters seem much nicer somehow. We’ll get to him next episode (although he’s not really a cannibal, so we’re not going to give him much time). 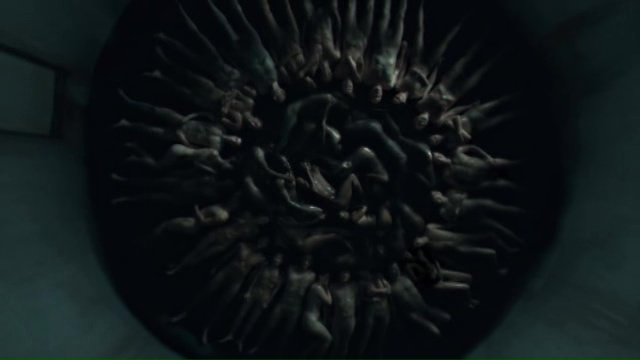 Will remembers Hannibal stuffing Abigail’s ear down his oesophagus. Now he’s sure he didn’t kill and eat her. Jack comes to visit, but refuses to listen to Will’s certainty about Hannibal. 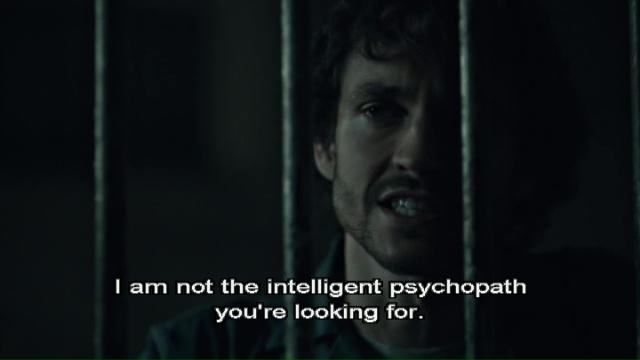 A bit more guilt for Jack. A bit more fun for Hannibal.