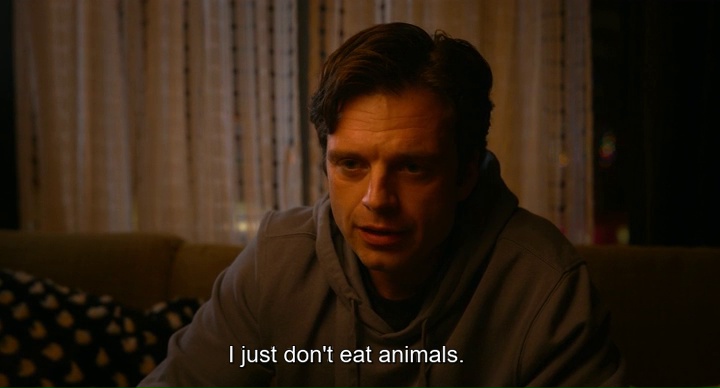 If you’ve heard about this new movie, you’ll know it’s a sort of cannibal romcom.

Perhaps the first romcom was Adam and Eve – she was created from his rib, as “an help meet” (Genesis 2:18-21) because he was incapable of looking after Eden on his own. And he was, you know, horny. Ever since, relationships have been tricky – they’re about status, property rights and, above all, appetites. Feudal lords sealed alliances by betrothing their children, often marrying their small child off to a complete stranger. For most of human history, women were property, owned by their fathers until ownership was transferred to their husbands. What happened to them after that was up to the appetites of the man. It often still is.

Modern dating has in many ways returned to the realm of the unknown betrothal. Pictures appear on a phone screen and are assessed in an instant. If a candidate is deemed possibly sponge-worthy, a meeting is arranged and may lead to casual sex, long-term commitment or, in unfortunate cases, cannibalism.

What do we know about the person on the dating scene? Each click, each drink, is a contract, the person being (inter)viewed is already objectified by the algorithm that has decided he or she may be suitable. Relationships are chosen in the same way (and often with less forethought) as an Uber-eats meal. The app reduces us to our basics – appearance, tastes – we’re just meat.

This movie, Fresh, the first film by director Mimi Cave and writer Lauryn Kahn (good interview here but beware of spoilers) and produced by Adam McKay (Don’t Look Up), takes the metaphor to its logical conclusion. Noa (Daisy Edgar-Jones from Normal People), finds herself dating boors who feel entitled to comment on her appearance, are interested exclusively in themselves, and abuse her if she dares to refuse sex. As a woman, her body is their entitlement.

Noa meets Steve (Sebastian Stan from Winter Soldier), not on her dating site, which has been a huge disappointment to her, but in a supermarket. Steve seems charming, clever, and doesn’t press her for sex. When he draws back from sex on their first date, the first time a man has done that in her experience (maybe in history) she asks him if he wants something to drink or eat, and he says “no, just you”. He ruins her enjoyment of her spare ribs by saying “I don’t eat animals.” He means non-human animals, but it’s a common piece of lazy language; he eats humans, and humans are of course animals.

Noa agrees to a weekend getaway with Steve after only a few dates. Bad idea. This starts as a romcom but ends up covered in blood and body parts. Images of other animals waiting to be eaten reinforce the point.

Steve wants to know whom Noa has told. Who knows she is going away with him?

Steve drugs Noa (another common dating strategy) and only then do the credits start, some 33 minutes into the film, as she collapses to the floor.

Steve imprisons her, finally revealing his plan: to keep her alive and slowly sell her meat to his wealthy cannibal clients, keeping the rest of her alive and “fresh” (thus the film title) as long as possible.

Sounds grim? Sure, but also darkly funny. Steve is witty and charming apart from the, you know, kidnapping and cannibalism, and Noa is smart and tough, as she has to be in this dog-eat-dog, or man-eat-woman, world. She has to woo her abuser, as so many women do, in order to escape, even if that means eating human flesh, even perhaps her own.

This is a smart and gripping cannibal film from – wait for it – Disney! Produced by Searchlight, the studio of Nomadland and The Shape of Water, it premiered at Sundance in January this year and was released on Disney+ in the UK but Hulu in the US. It certainly is a long way from Mickey Mouse and Snow White. Yet, like them, it has a moral of sorts. As one reviewer put it:

You will want to become a vegetarian after watching “Fresh.”

Another reviewer (beware of spoilers in this link) wrote:

I don’t know about you, but I, for one, am never eating meat again.

Noa is the protagonist, and the main plot involves her predicament and her attempts to escape (no spoilers!) But Steve is a fascinating character in that he really likes Noa, feels a little bit bad about what he does, but likes the money more. Does that remind us of the farmers who claim to “love” their animals, even as they fatten them up for the abattoir? How many stories have we heard of country kids who befriend a baby lamb or calf or piglet and weep when dad appears with a cleaver, only to get over it and become killers themselves. Steve is the same, but his “livestock” are young women. He likes them, but it’s a business – he packages up their meat, their hair, even their underwear for those who want them. His cold room is full of chilled meat, carefully labelled with the names of the women it came from.

Steve’s wife, who knows exactly what he does, asks him “how was work?” He replies that he is very busy with the “new product”.

He can’t afford to care. Nor can his wife, who is missing a leg. She is a “product” whom he adopted. She knows the answer to the header of my blog “what’s it like to be edible?”

It reminded me of an interview with a slaughterhouse worker in Gail Eisnitz’s extraordinary book Slaughterhouse about the workers who kill for a living and the animals who we choose to eat, the ones that are least aggressive, the gentle and friendly species:

If you work in that stick pit for any period of time, you develop an attitude that lets you kill things but doesn’t let you care…. You may want to pet it. Pigs down on the kill floor have come up and nuzzled me like a puppy. Two minutes later I had to kill them – beat them to death with a pipe. I can’t care.

This is not a dystopia, it is our world, now, a world in which the rich can buy anything they want including the labour, homes and bodies of others. Steve describes them as the “one percent of the one percent” – they want what no one else can have.

And it’s women they want to eat, because it’s all about ownership and power.

Think of Jeffrey Epstein who supplied underage girls to the rich and powerful. Gary Heidnik started a church which made him a lot of money and then, like Steve in this film, kidnapped, tortured, and raped six women, killing two of them and allegedly feeding the survivors with the flesh of one of the dead. Patrick Bateman was a (fictional) cannibal in the book (if not the film) of American Psycho, consuming human brains because there were absolutely no limits to his appetites.

Is there really anything to stop the “one percent of the one percent” paying to satisfy their cannibalistic appetites? If they are tired of beef and lamb, what meat is next? Millions of people disappear each year, and many are never found. Could some of them be ending up on the plates of the rich?

What Steve does to the lonely women he kidnaps is shocking. But so is what we pay minimum wage workers to do to other species. As Hannibal said, “It’s only cannibalism if we’re equals”. Eating other mammals such as Bos taurus, Ovis aries or Sus domesticus is only one thin red species line away from eating Homo sapiens.

Fresh is currently showing 81% fresh (has to really) on Rotten Tomatoes.