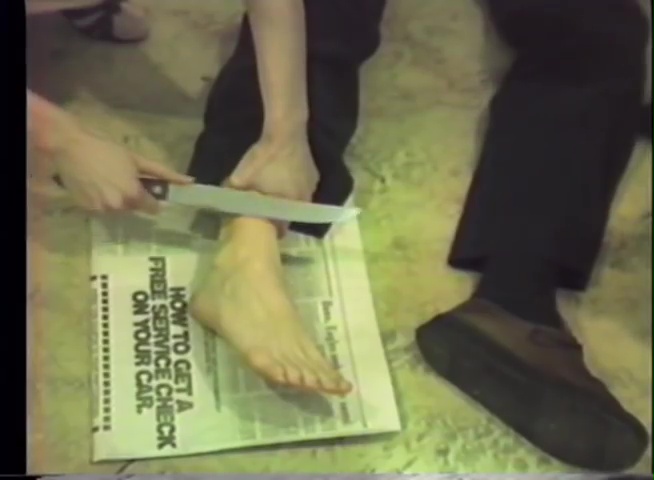 I don’t usually review short films in this blog, only because there are so many feature-length films demanding my attention, as well as news stories filling my feeds. But this one caught my eye. It’s the story of two young women who are followed home by a cannibal, and that dynamic of the apparently vulnerable females turning against the aggressive male reminded me inexorably of a movie I reviewed recently – Fresh, in which a young woman meets and dates a charming guy who turns out to be an entrepreneurial cannibal.

This film, Possibly in Michigan, is a 1983 musical horror film by artist Cecilia Condit about two young women, Sharon and Janice, who are stalked through a shopping mall by a cannibal named Arthur. The three protagonists (there is no one else in the mall, adding to the dreamlike mood) have two things in common – violence and perfume. Perfume of course is the distillation of desire, as shown in the film Perfume. Arthur follows them home, and the victims become the attackers. Is violence the only possible response to violence? Perhaps, the film seems to suggest. But the key song line is:

“Love shouldn’t cost an arm and a leg”

All the men in the film are masked as animals – pigs, dogs – and all have an aura of violence. But the actual violence, the offer to eat the women one limb at a time, comes from an unmasked man named as “Prince Charming.” The modern monster is always indistinguishable from the “normal”.

This is not the kind of short film created in the hope of discovery and a career in blockbusters. The artist is a retired professor in her seventies, a video artist who creates feminist fairy tales, and the film itself is in the permanent collection of the New York Museum of Modern Art. The New York Times called it a

I loved the comments on YouTube, many of which said that it was “unsettling” rather than scary. Exactly what horror should be – like dreams, horror is really a release of repressed feelings. Some of the scariest dreams don’t involve slashers or monsters, they just touch a nerve; something we have kept buried inside is, for a few unconscious seconds, brought to the surface and examined in the light.

“As someone who’s been repeatedly abused by narcissists where it felt like they were eating my very energy and being, this was extremely ‘healing’ in a weird way. Thank you.”

Cannibalism is about power, and power can be transferred, as happens in this film. But the original monster is Arthur, a faceless man wearing an expressionless mask, the very image of impersonal, brutal menace. Cannibalism bothers us because it reminds us we are made of meat like the animals we eat, but meat is, in Western cultures at least, a symbol of male power over nature, which includes and is represented by the female. Carol Adams sums this up by saying meat is “the final stage of male desire” – men eat red meat, which comes from animals, the females of whom have already had their babies, their milk and their eggs taken from them for human consumption, until they are “spent”, at which time they are minced up for ‘pet’ food. What Adams calls “feminised protein” represents the suffering of female animals for the appetite of male humans like Arthur.

The film was rediscovered by Gen Z when a 15-second clip from one of the songs was loaded onto TikTok. I recommend the film to you – the link to the clip is at the top of this blog, where I usually load trailers – this is the whole work.